Imprisonment in Louisiana: “First in the World”

A new 8-part Times Picayune series on the prison industry in Louisiana starts off with these foreboding sentences:

Louisiana is the world’s prison capital. The state imprisons more of its people, per head, than any of its U.S. counterparts. First among Americans means first in the world. Louisiana’s incarceration rate is nearly five times Iran’s, 13 times China’s and 20 times Germany’s. 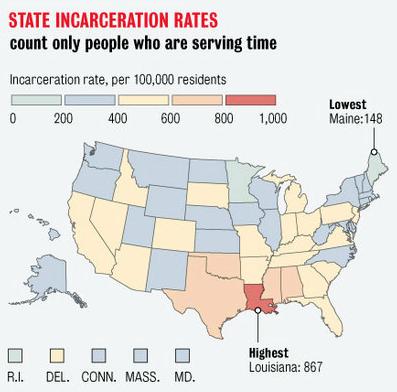 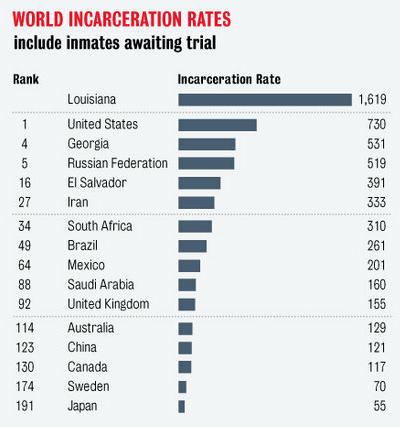 One out of every 86 Louisianans is in prison.

The motivation is money.   Most prisoners in Louisiana are in for-profit prisons.  The state spends $663 million a year on imprisonment; $182 million of that goes to for-profit correctional companies or contracted local sheriffs.  Many small towns depend on the prisons to fund their law enforcement.

They don’t want to see the prison system get smaller or the number of people in custody reduced, even though the crime rate is down, because the good old boys are all linked together in the punishment network, which is good for them financially and politically.

The bottom line is, if locking everybody up and throwing away the key works, then we should have the lowest crime rate in the United States. We don’t. So then you have to really look at your policies. In my opinion, it’s strictly a fiscal issue.

Those who benefit from the prison industry have pushed through some of the severest sentencing laws in the country and aggressively resist reform.  “Few lobbies in Louisiana,” writes reporter Cindy Chang, “are as powerful as the sheriffs association.”  As a result, Louisiana’s sentencing laws are out-of-step with the rest of the country: 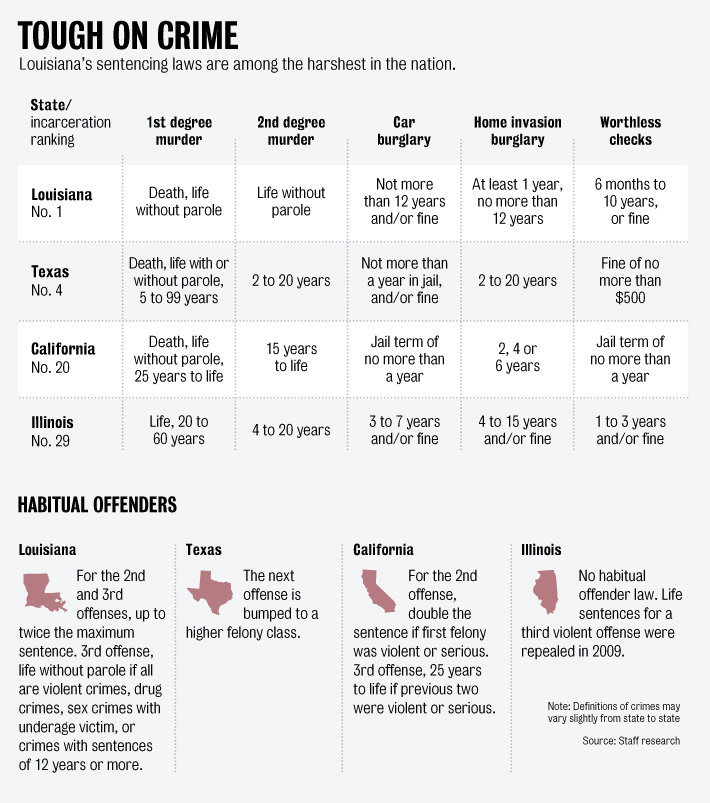 All life sentences are, automatically, without any chance of parole and more than one in ten Louisiana prisoners are serving life sentences (the majority of lifers were convicted before age 30): 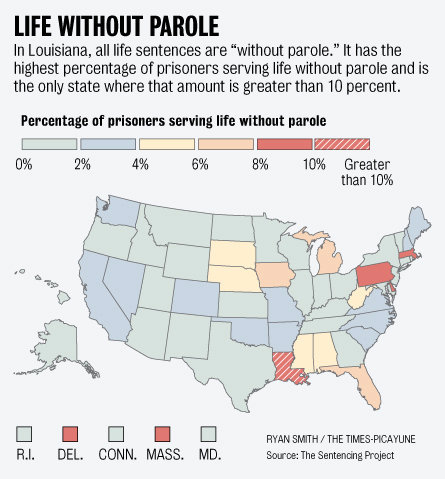 Tomorrow I’ll follow up with a post on why there are so many for-profit prisons in Louisiana and how it’s affected the lives of prisoners both during and after incarceration.

Imprisonment in Louisiana: “First in the World” « Welcome to the Doctor's Office — June 6, 2012

"One out of every 86 Louisianans is in prison."

Proximity to the Canadian border continues to be a good predictor of beneficial social outcomes.

I'm not sure the profit or nonprofit issue should even be the main topic here! Are you actually saying that people committing crimes are being used or abused? Louisiana is getting criminals off the streets! And making it to where the working class people are not having to pay for it. How many times does someone have sell Meth to our kids, families, neighbors, etc... Before we can put himher where they can't cook Meth anymore? How about Sexual Offenders?? How many kid's lives must be RUINED before we can put them where they can't watch our Babies play at the park?? I live in Louisiana. We are not all running around with rifles, duct tape, and lynch mobs!!

[...] I posted about the extraordinary number of people in Louisiana prisons.  The rise in imprisonment mirrors the U.S. growth that began with the [...]

Aha! "One in 86 Louisiana adults is in the prison system..." ADULTS, sorry, but it´s important fact. http://www.nytimes.com/2012/05/26/opinion/blow-plantations-prisons-and-profits.html?_r=1

[link] Incarceration on the cheap in Louisiana « slendermeans — October 13, 2012

[...] criminal justice, criminology, penology, women's rights Yesterday I posted about the extraordinary number of people in Louisiana prisons.  The rise in imprisonment mirrors the U.S. growth that began with the so-called war on drugs, [...]

[...] This is a simple, obvious premise, but capitalists don’t seem to get it (the book The Enterprise of Law, for instance, which is really good at pinpointing the fundamental issues with the “justice system” but proposes the absurd solution of privatizing everything): when prisons are for-profit, prisoners become a commodity. This is what happened in Louisiana, which now has the highest rate of imprisonment in the world. [...]

quick hit: Incarceration on the cheap in Louisiana | feimineach — December 30, 2013

[…] I posted about the extraordinary number of people in Louisiana prisons.  The rise in imprisonment mirrors the U.S. growth that began with the so-called war on drugs, […]

Please review this: CORRUPTION SHREVEPORT! WE MUST NOT ALLOW SUPPRESSION OF CITIZEN OUTCRY ONLINE. THERE IS CRUELTY TOWARDS THE INCARCERATED, TORTURE OF HOSPITAL PATIENTS, & RAMPANT POLICE BRUTALITY. Mayor Perkins/Caddo Da/Keel Radio/KTUX/Ochsner Health Systems/Caddo Sheriff's Office/Caddo Clerk/Bossier Crime Stoppers/City of Shreveport... THEY ALL: FILTER/BLOCK/DELETE/REPORT OUTCRY AS SPAM/ & RIG COMMUNITY STANDARDS TO SUPPRESS CITIZEN OUTCRY [Facebook DATA]. SHREVEPORT, LA: 8TH MOST DANGEROUS CITY IN AMERICA. LOUISIANA: 5TH MOST CORRUPT. VERY HIGH UNEMPLOYMENT. VERY HIGH HOMICIDE. VERY HIGH INCARCERATION RATES. POOREST STATE. MOST CAPITAL PUNISHMENTS... WE MUST MONITOR SOCIAL MEDIA FOR CITIZEN OUTCRY SO THAT IT CANNOT BE SUPPRESSED BY CRIMINAL SYNDICATION. 🛰🇺🇸⚡️. Evidence is available upon request. Child export with the child protection agency to pedophiles must not be tolerated. People of color & the poor should not be silenced or exploited.🦅C OMPLICIT CRIMINALS BLOCK US. SHREVEPORT GOVERNMENT COMPLETELY DISREGARDS PUBLIC OUTCRY WITH THE MEDIA CONTROLLERS. CITIZENS SUBJECTED TO HOSPITAL ABUSE/MALPRACTICE HAVE NO LEGAL RECOURSE. 911 CALLING IS EXPLOITED AND ANY CALLING OF IT TO REPORT CHILD SERVICES, JUDGES, LAW ENFORCEMENT, ALL HAS NO AFFECT RESULTING IN THREATS OF INCARCERATION & HARASSMENT(CALL LOGS).
https://www.change.org/p/governor-bobby-jindal-louisiana-secretary-kathleen-sebelius-hhs-stop-patient-abuse-and-cover-up-at-lsu-health-sciences-center-shreveport-12bbe945-b759-4e98-950a-bfc0d6689619