Cross-posted at Scientopia, Ms., and Jezebel.

Dolores R. and Andrew S. let us know about the report “The College Payoff: Education, Occupations, Lifetime Earnings,” by researchers at Georgetown University’s Center on Education and the Workforce, based on 2007-2009 American Community Survey data (via Feministing and Kay Steiger). Not surprisingly, higher education significantly increases lifetime earnings of U.S. workers: 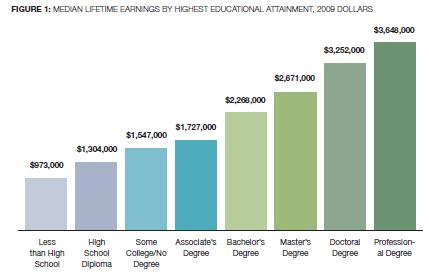 But education doesn’t pay off equally for all groups. Women, not surprisingly, make less at every level of education than men do; in fact, their median lifetime earnings are generally on par with men a couple of rungs down the educational ladder: 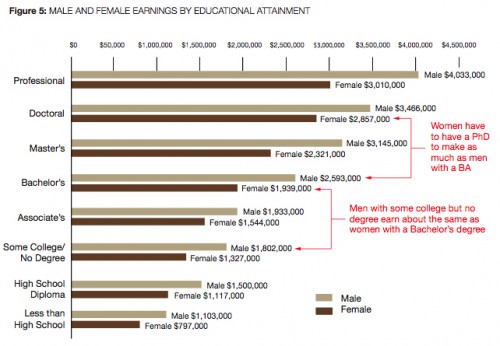 Ah, but, you might think, women are more likely to take time out of the workforce than men, so perhaps that accounts for the difference. But the gaps calculated here are only for full-time, year-round workers and do not include periods out of the workforce — that is, this is the “best-case scenario” in terms of comparing gender earnings, and yet women still make about 25% less than men at the same educational level. When they include workers taking time out of the workforce, the pay gap would be significantly larger. The far right column in this table shows how much less women make compared to men based on the “typical” work pattern for workers in each educational category:

The benefits of education also vary by race and ethnicity, with non-Hispanic Whites generally making more at each educational level than all other groups, though Asians outearn them at the highest levels: 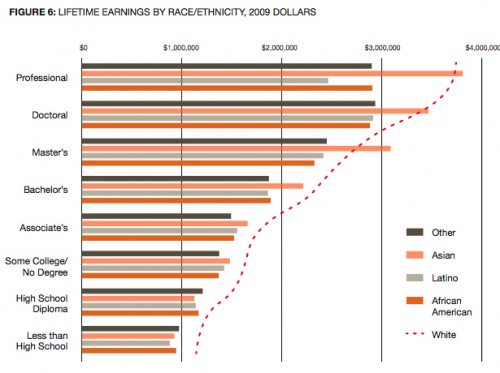 Though the authors don’t include a table showing the gap if you include workers who do not work full-time year-round throughout their careers, they state that as with gender, the gap widens significantly, since non-Whites are more likely to experience periods without work.

So does education pay? Undoubtedly, for all groups. But due to factors such as occupational segregation (especially by gender) and discrimination in the workplace, the return on an educational investment is clearly a lot higher for some than others.

Also see our recent posts on the gender gap in science and tech jobs, racial differences in job loss during the recession, unemployment among Black and White college grads, and trends in job segregation by sex.

Lifetime Earnings Gaps, By Sex and Race/Ethnicity « Welcome to the Doctor's Office — August 10, 2011

I'm curious to see how this has changed over time. Are we getting more equal or just holding still?

For women's rights, especially, I would say that the women who really grew up since most of the advances were made are only in their 20's and 30's now. It would make it a little harder to judge the net effect.

Who thought it was acceptable to put a line in a bar graph? Do whites have access to an educational level halfway between a bachelor's and a master's degree, as indicated by there being data for that point?

I am also confused: Do the graphs only include full-time, year-round workers who do not have gaps out of the workforce, or do they include people who currently work full-time, year-round but have previously had a significant gap in employment, and extrapolate their current data to determine lifetime earnings?

EDIT: Appears that they used the average earnings, by age, of FTYR people regardless of prior employment status, but did not account for differences in retirement age/lifespan when calculating lifetime earnings.

Anyone else unable to see comments on the previous smurfette article?

The sex differential in earnings by education really makes me think that the so-called crisis of boys (men are less likely to get a college degree than women nowadays) has everything to do with the extra earning power men get for their education. Women _have_ to get at least a BA to break even with men who have an associate's, or a PhD to break even with men with a BA.

Maybe, but you whiffed on the "time off" question.  The theory is that women are paid less because they took time off, maybe two years ago, falling behind comparable men

Why no discrimination against Asians?  It's almost as if their qualifications are valued higher than those of other minorities.

Silly data that prove absolutely nothing.
Look how WIDE the freaking occupational sectors are!
That ALONE tells you this is so much bullsh**

[...] harassment (not to mention assault and other violence), higher rates of poverty, glass ceilings, less income than men for the same work and/or higher qualifications, poor representation in government, and continuous pressure to be hairless and seductively [...]

Yes, "the gaps calculated here are only for full-time, year-round workers and do not include periods out of the workforce". But they can't look at employment history here. So you're not counted in these numbers if you're not currently working full time, but you are counted if you were recently out of the work force and re-entered it. This makes sense because they're not able to track actual people over the course of their careers. As they say in the appendix, "no data source exists with a large number of cases that tracks individuals throughout their careers by earnings, occupation, and hours worked per year." Instead, they look at different people at various points in their work history where they are working full-time and year-round. But it means that, even when you look only all currently full-time workers, gaps in employment history are playing a role in salary/wage because exiting full-time work doesn't just reduce your wage during that period, it continues to reduce it afterward.

I'd like to see a cross section for women of color.  Though after seeing these numbers, maybe I don't really want to know...

[...] Lifetime Earnings Gaps, by Sex and Race/Ethnicity: … the gaps calculated here are only for full-time, year-round workers and do not include periods out of the workforce… yet women still make about 25% less than men at the same educational level. [...]

Inequality in Average Earnings by Gender and Education | Introduction to Sociology — August 28, 2011

In the post and comments everything is exogenous to women. They have no choice. Not so for men. After all they did this to women.

Yet labor statistics consistently show women working an hour less everyday. Shirking is a choice as much as competing 110 percent. But if you are a smart employer, which do you promote?

Is there self selection? Plumber is an excellent choice if you want to wring every dollar possible out of your HS degree, but medical office receptionist is more comfortable.

Vogue magazine is all women -- the editor, writers, the models.  It has nothing STEM related.  Maybe exogenous is silly.

the difference is overtime. men are more likeley to do it than women. at my work men make more money at work becuase the do longer hours than the women. we all make the same. its hourley pay quit crying and start saying give me that 16 hour shift and you willl make just as much.

just throwing in my two cents, making a little point, personally I work at a restaurant, I'm a cook, and earn $8.50 an hour, i do have a college degree, and am in the process of changing jobs, but I can tell you that after 45 hour work weeks, I make about $500 on a bi-weekly paycheck, and I can also tell you, that on a decently busy two nights, its not difficult for any of the waitresses to make well over that, i know of a few girls leaving with $800+ dollars in a night, we only hire waitresses, no waiters.  So lets talk about discrimination there? Not 100% sure what my point is exactly, but i feel as though its a bit of reverse discrimination

[...] I was speaking about in class in terms of education level and race (scroll down to figure 6) Lifetime Earnings Gaps, by Sex and Race/Ethnicity. Since I can’t find the original chart that broke it down in terms of gender and race, you [...]

Links and other Information from our Lecture on Wednesday | WS 420 Feminism in Global Perspective (M/W) — January 26, 2012

[...] I was speaking about in class in terms of education level and race (scroll down to figure 6) Lifetime Earnings Gaps, by Sex and Race/Ethnicity. Since I can’t find the original chart that broke it down in terms of gender and race, you [...]

[...] earn more than most minorities at all levels of education (though children of color experience disadvantages that impact them even before they enter [...]