Full-time women workers earn 80.2% of what full-time men workers earn.  One of the primary reasons that women earn less is job segregation by sex.  Jobs themselves are gendered, such that women have a tendency to enter feminized occupations and men have a tendency to enter masculinized occupations.  How severe is job segregation by sex?  A new report by the Institute for Women’s Policy Research, newly updated for 2009, reports that about four in ten women and men work in jobs that are 75% female and male respectively.

Overall, masculinized occupations pay more.  (This is a different kind of sexism, a sexism against feminine-coded things instead of against women, but sexism nonetheless… for example.)  Job segregation, then, contributes to the pay gap between men and women.

The figure below shows how this has changed over time.  The y axis is an “Index of Dissimilarity.”  Basically, a score of one indicates complete segregation and a score of zero means that the job is 50/50 male and female. 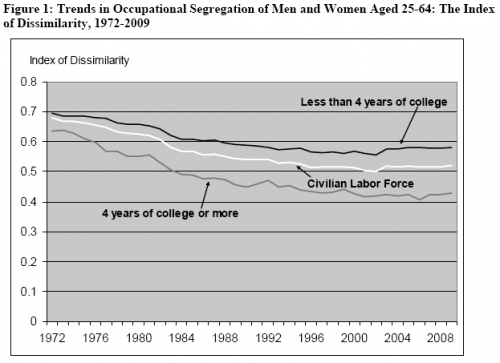 The white line, labeled “civilian labor force” shows that, overall, sex segregation has been going down over time.  It also shows, however, that most of the decrease occurred in the ’70s and ’80s.  It has changed little since then.

The lines above and below the white line show that sex segregation correlates with education level.  People who have at least a bachelors degree are in less sex segregated jobs, while people who did not attend or finish college tend to be in more segregated jobs.  This means that, insofar as sex segregation at work contributes to a wage gap, it is more extreme for working class people than for others.

I'd be really interested to know what the wage difference is between women and men in the same fields. Is there any data on that available?

If women are as productive as men, then there is a LOT of money to be made in exploiting the spread in compensation.

Regrettably, deliberately targeting women for employment due to their low wage would, despite tending to bid up women's wages and reducing the gap, attract tremendous social and likely legal backlash from exactly the people who are most opposed to the gap in the first place!

I wonder what the spread is between men and women for the following:

o men and women women working in a "masculinized" field

o men and women working in a "femininized" field

[...] etc. In U.S. history, it has often been racial segregation, but there is also something like gender segregation, wealth segregation etc., and often these types overlap. Segregation can be the forced and legal [...]

[...] fear not, boys. The more educated you get, the less separation of the sexes you’ll encounter in your life beyond school. So keep your eyes on Frost and Shakespeare and [...]