As a number of readers emailed us to point out, yesterday was International Women’s Day, designed to highlight both women’s accomplishments and the persistence of gender inequality worldwide. Ben Buursma noticed an ad in an Indonesian newspaper celebrating International Women’s Day and marketing “Books to empower all women,” though it turns out what they empower women to do is “look into the minds of men” and “find, keep, and understand a man”: 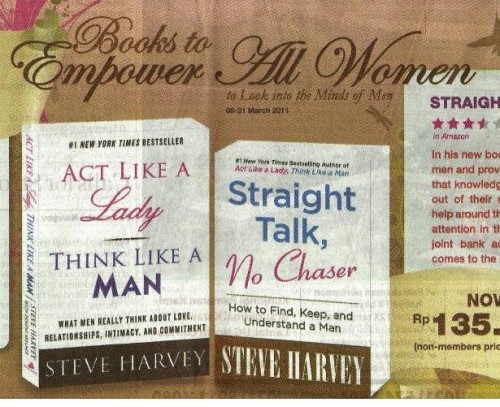 Emma M. H. sent in a link to the the White House Council on Women and Girls report on the status and well-being of U.S. women on a variety of social indicators. Interestingly, while both men and women are waiting longer to get married, the gender gap in age at first marriage has remained relatively constant for decades: 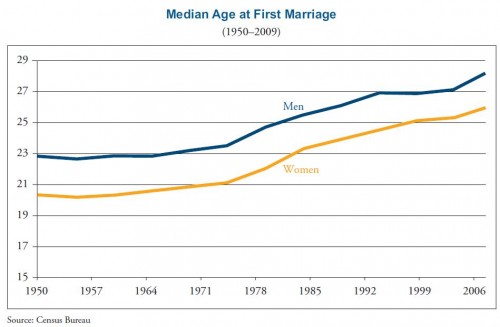 Men are more likely to be either married and never-married, while women currently more likely than men to be divorced or widowed: 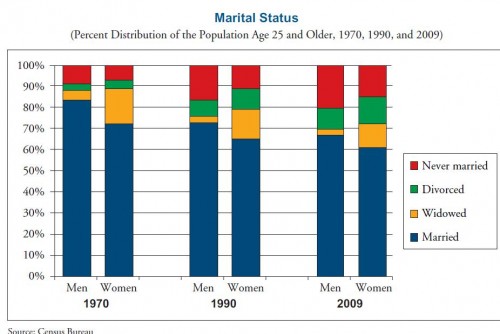 Over time, the percent of women who have never given birth has gone up, particularly for the 25-29 age group, though in the last decade there has been a slight downward trend for women aged 30-44: 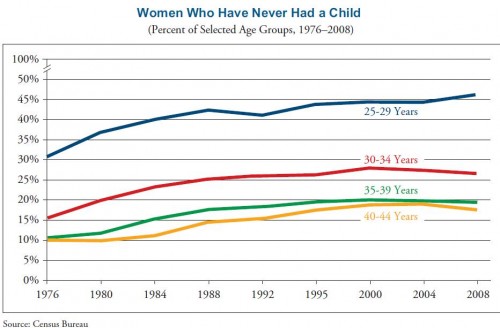 One note about that graph: the report uses the phrase “had a child” and “childbearing,” so I think this data would include women who have adopted children but never given birth.

I was surprised to see that rates of Cesarean sections have gone up in the past decade: 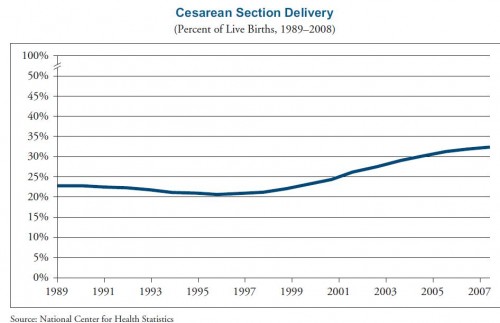 Women are now outperforming men in terms of educational attainment, earning the majority of bachelor’s degrees, though notice the number of degrees in engineering/computer science earned by women hasn’t increased since 1998: 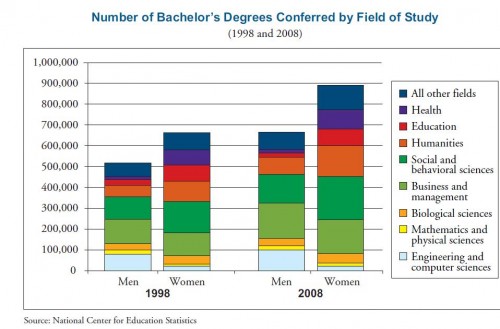 However, women still make less than men at each level of educational attainment: 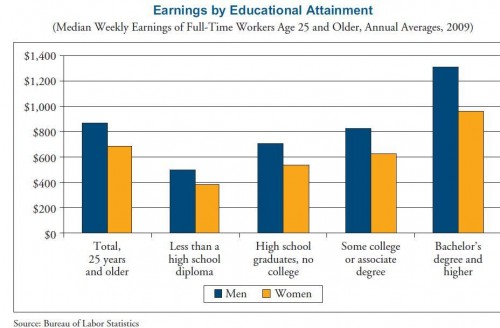 The report has lots more data on family life, work, education, health, crime, and so on. I’ll post on other topics in the future.

Finally, Ben N., Kay C., Gregory S., and Dave Z. all sent in this video starring Daniel Craig that highlights global gender inequality (though unfortunately I can’t find any reference that provides sources for the statistics in the video, so take it for what it’s worth):

From personal experience, grouping engineering with computers in this analysis is obscuring some very interesting data.

In mechanical, chemical, and most traditional forms of engineering women have increased their representation steadily, and are now a slight majority.

In computing, they are a huge minority something like 10%. Computing degrees are one of the very few degrees that has actually had female percentages drop since the 70s/80s.

Note: this is all current as of '05, when I graduated. I haven't looked into trends since then.

In mechanical, chemical, and most traditional forms of engineering women have increased their representation steadily, and are now a slight majority.

I'd love to see a source for that! That's completely untrue where I went to school. Where was this?

When seeing that picture of the indonesian newspaper I had to think about what one german newspaper did for World Women's Day. They published a list with 'A 100 things women can do better than men'.
And here are some of them
*Make more than one diet at once.
*Buy shoes.
*Planting plants on the balcony.
*Beeing sulky.
*Enjoy pretty soccer-players instead of learning the complicated offside rules.
*count calories.
*pour their hearts out at the hair dresser.
*pluck their eyebrows.
*Seeming confident while being completely clueless.
And my favourite one:
*Spending money they haven't earned.
And I guess the newspapers attempt to write something 'serious':
*Systematically underestimating themselves. Women still earn 25% less than men.
Yes, because the reason for that is that women underestimate themselves*Stupid women*. Interesting how they make this the women's fault.

So I thought that is a great collection of so many clicheed and mysoginistic statements all in honour of the women and world women's day. And yes, that newspaper was the BILD Zeitung, an extremely racist, populist, mysoginist (they have a naked women on the cover every day) 'newspaper' so it's really not surprising but it's also by far Germany's most read newspaper and that they still can publish crap like that without an outcry from anyone is very depressing.
Also I got the examples from a blog that made it's mission to document every bullshit this 'newspaper' publishes and translated it, since I would never in my life actually by this paper. http://www.bildblog.de/28509/chauvitag-2011/

(Yes, I am assuming that the majority of marriages are man-woman, but I believe this is the case in the USA. Someone please correct me if I'm wrong about that.)

Wow... using Steve Harvey's books to celebrate International Women's Day seems quite inappropriate, given the kind of discourse he holds about women...

it's interesting that you write that daniel craig stars in that vid, because i would've said judi dench is the star.

and for god's sake, when will cis people stop using trans people as punchlines?

tree, I'm really glad someone else said that because I felt really uneasy about the use of trans imagery in the ad, and was promptly told to shut up by my partner, who said I was getting all 'Claire in the Community' and who expected massive cookies for pointing out the ad in the first place.

Agreed. It made me uneasy as well. In fact, I didn't share it because of that.

some women are having c-section so they can keep their vagina from turning into a wizards sleeve:( ...it is just so unnatural to have a planned c-section. Kegels do wonders!

"I was surprised to see that rates of Cesarean sections have gone up in the past decade:"

One issue is defensive medicine. Cut and they can't sue seems to be a really big issue. Breech births and twins used to be delivered, now many women have trouble finding doctors that will do anything but surgery in these cases.

Another is the rise of inductions. They have more than doubled from the 90's. Inductions fail quite often, in fact you are twice as likely to have a c-section if you undergo an induction. Some are done for medical reasons although they can be dubious; pre-eclampsia, serious issue, "big baby", not so much. Some studies I have read show that many are induced, listed "for post-dates," even though the pregnancy is not medically considered post dates. Many are done for the sake of convenience, for mother (want a special day or want/ their work schedule) or doctor (has a lot of patients due around the same time/ doesn't want to get called in on a weekend).

This has been compounded by the fact that for years ACOG (America College of Obstetricians and Gynaecology) hyped up the danger of giving birth vaginally after having a cesarian (VBAC). Once a c-section always a c-section. They have only recently amended their recommendations to reflect the relatively low risk of a VBAC.

[...] pedestrian things like health and dental benefits, immigration issues, or family pressure. Since people are marrying older and more educated (though the workforce as a whole is more educated than it was 40 or 50 years [...]