Hanging onto the “Stewardess” at Delta Airlines

Back when we were kind of obsessed with “man” and “woman” symbology — e.g., whether traffic lights ever include female figures, how stick figures tend to be male, unless they’re parenting, the weird world of default avatars, and also this interesting alternative symbol for disability — I had considered writing a post featuring the then-stewardess, now-flight attendant icon seen on airplanes.  Airplanes have a longer life than cars and, so, many of the airplanes operated by commercial companies still have the old stewardess icon: a friendly round head with a dress.  These were old planes though, I figured, so the post wouldn’t pack much of a punch. They were like that, back then, after all.

Lo and behold, MirandaB took a flight on Delta and snapped a photograph of an undeniably modern incarnation of the friendly round head: 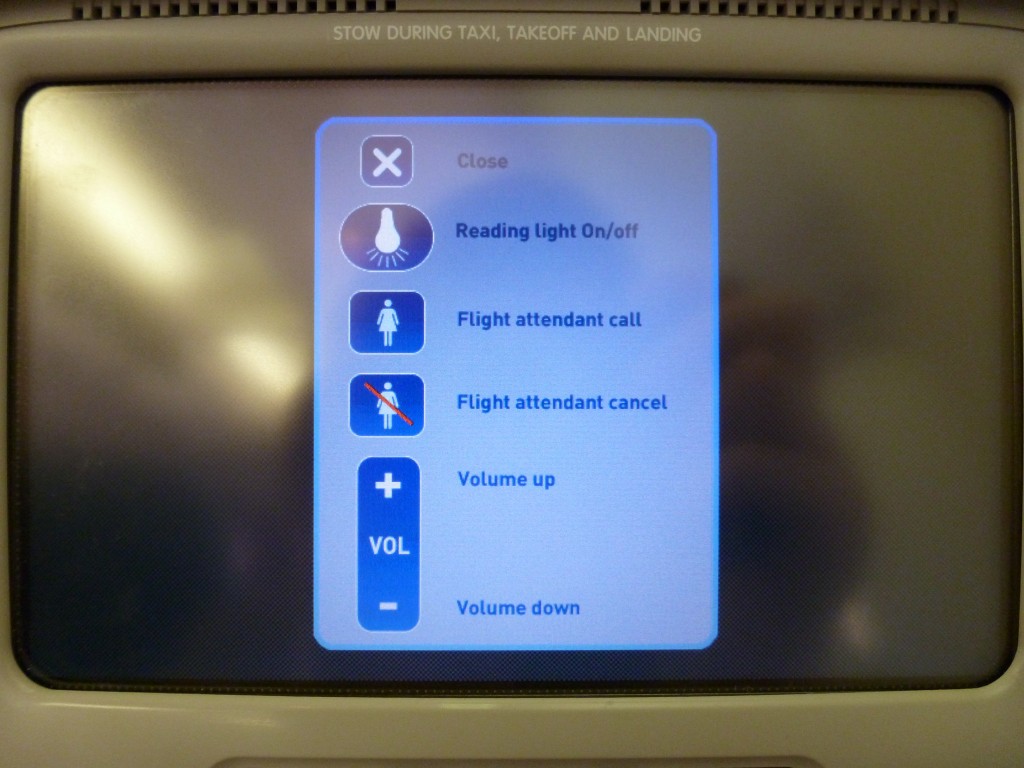 Delta chose to use a digitally-skirted stick figure on its task screen.  Just to be clear, Delta still, in 2011, feels comfortable representing “flight attendants” as 100% female.  That’s a win with the language, a fail with the symbology.

According to the Bureau of Labor Statistics, women account for 81% of flight attendants, not 100% by a long shot.  But you can see why men might be reluctant to join their ranks.

Also in gender, sexism, and air travel: Sexism in Aviation, Then and Now, Selling Feminine Passivity, “Singapore Girls” and Emotion Work, and Fly the Unfriendly Skies.

Given that the alternative, "neutral" flight attendant figure would invariably be a man, or be read as a man, I'm fine with it.  Quite tired of images of women representing women and images of men representing everyone.

The last time I was on an airplane I was thinking about this issue and I believe it to be a bit more complicated than implied here. I recognize that it is problematic to represent flight attendants as solely female but wonder what the appropriate alternative might be? Certainly a "neutral" (read: male) figure would only serve to perpetuate assumptions of person=man, further marginalizing women. The skirted figure, which admittedly contributes to false gender binaries and perpetuates gendered employment stereotypes, does at least acknowledge the existence of women.

I agree with Bel's comment. The post implies that male flight attendants would resent being represented as female on the call button -- that this might even make them "reluctant to join [flight attendants'] ranks." Such a comment capitulates to the popular sentiment that it's worse for a man to be represented as a woman than vice versa. Neutral figures are often read as male, even when they represent both men and women, and women put up with this all the time. Now, if there were a "pilot" button in which the figure represented as neutral/male, next to the female "flight attendant," then I'd have more of a problem.

I should add that the Soc Images default avatar now looks decidedly male! Can we change that?

Seriously everyone? Yes, it would be difficult to find a gender neutral icon that didn't represent the neutral person as male. But automatically making the symbol a female subtly reinforces the idea that it is a woman's job. When someone sees service people's jobs represented as women throughout their life, they associate these jobs with women. Thus, men are less likely to enter the field. And women continue to be seen in subservient, less powerful positions. This shit matters people!

Just because someone wears a skirt, does that mean they are women?

81% of the work force may not be "100% by a long shot", but it still indicates that the majority of flight attendants are women.  In that sense, I don't think there is anything sexist or misguidedly stereotypical in representing flight attendants with a female-reminiscent symbol.

Ideally, there would be a male and female figure next to each other, to account for both genders in the profession.  If a man felt reluctant to become a flight attendant based on a gendered symbol (and the fact that it is a mostly female-dominated job), then chalk that up to his own socially-derived narrow-mindedness.  The airline doesn't owe us an enabling form of political correctness.

Just a note about the changing of the term 'air-stewardess' to 'flight attendant'; I don't see why a male flight attendant could not simply be referred as an air-steward.  Unlike English, many languages have gendered nouns, and a noun's implied femininity or masculinity is usually arbitrary in conjunction its male or female pronoun.

While I can understand how this doesn't work in English, I don't see why a male flight attendant could not simply be referred to as an air-steward, rather than replace the term with the gender-neutral 'attendant'.  I don't agree that un-gendering words alleviates sexist notions, but rather perpetuates them, in trying to apologize for them.

Many airlines I know have security videos that they show on flight, rather than having the staff do the exact same "exit is here/ put the swim vest over your head/ pull the oxygen mask towards you" routine on each flight. Most of the ones I have seen were animated. I have yet to see a female pilot or co-pilot in any of them (always male) or a male flight attendant (always female). Worst offenders in my opinion in this are El Al and British Airways. El Al a tiny female "stewardess fairy". The British Airways video features stewardesses so stick thin that at my last BA flight some passengers laughed at the video and pointed out loudly and to their embarrassment,  how much older, "fatter" and "uglier" the actual stewardesses on the flight were and that there were also "gays" (meaning: male flight attendants) on the flight, not just stick-thin female attendants like in the video.

Last but not least: You absolutely HAVE TO read this book:
http://femininityinflight.com/index.html

It's coming from a place of Unfortunate Implications, but thing is....this "default" icon is a woman.  It may be "default" for a job that is stereotypically, but not totally, female, but realize that your post ALSO has an Unfortunate Implication: that the default for anything that is not 100% female MUST be male (something that annoyed me about learning romance languages, honestly).  In most cases, the "default" icon is masculine (if it has any sort of implicit gender), and any women indicated by that icon are exceptions to the "rule" that a person is a man.  This is probably the only case I can think of where icons imply "woman=person, man=exception."  It's an interesting thought, but a more interesting thought would be to examine why you think that a "person" icon should not depict a figure implied to be female if it isn't something female-specific.  It's worth noting that female flight attendants on most airlines I've traveled on (including the ones that still clearly have a "hot, thin, done-up" standard for female employees) are not required to wear skirts/dresses.  It would be difficult to depict an icon that is supposed to be read as "human" without it being read as "male" or "female" by at least a large group of people; being more realistic and depicting a pants-wearing figure would be read as male, even though more likely than not, a pants-wearing female would be the person in question.  To be quite honest, it's refreshing that at least once in life, men have to deal with being assumed to be women unless otherwise noted, instead of "people are men unless otherwise noted" or "any group including even one man, even if among a thousand women, are "guys.""

What's weird to me is not that the flight attendant is assumed to be female, but that an otherwise unmarked-female is supposed to mean "flight attendant."  So we're basically saying that all females are there to serve you? A glass of beverage on a tray, or perhaps an androgynous torso with a platter (and perhaps a bow tie? bow ties are cool), would be much much more appropriate for conveying "service."

Along the lines of the tray idea, how about a hand holding a coffee pot or water bottle?

I'm pretty sure not all lightbulbs look like the one depicted wither. Probably only 81% of them do.

Also it reads "Flight Attendant" not "stewardess" like you keep saying.