We recently critiqued Facebook’s “neutral” avatar for appearing both white and male.  Both Abby J. and Noah Brier pointed us to the fact that Rob Walker at Murketing has been collecting default avatars.  His collection is really interesting.  First, it demonstrates that the avatars don’t need to be gendered at all. 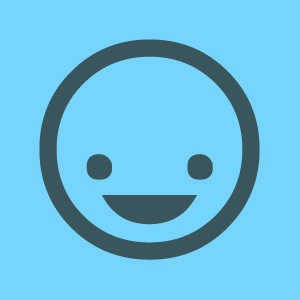 Second, it demonstrates that the avatars don’t have to human at all:

Third, his collection also suggests that, when the avatar is human and discernibly gendered, it usually appears to be male.  There’s the Facebook avatar, as well as…

The avatar tends to be male, unless the company produces a default male and a default female.

This collection reveals that the appearance of a company’s default avatar is by no means inevitable or accidental.  Companies must make choices and they are, indeed, making choices about what kind of person is the default person.

Check out his whole collection.  It is growing.

Jamie R. sent in a link to a video that presents a lot of attention-grabbing statistics (which may or may not be accurate). At first it appears that the avatar could be unisex, but then at about 1:18, we see the “female” avatar:

Did You Know? from Amybeth on Vimeo.

At no other place in the video do we see the female avatar except when the “neutral” one is presented as married…indicating, from the context of the video, that it is not unisex or neutral, but male.

MORE! You may have noticed that our revamping of the site involved putting our names up.  Lo and behold, these male avatars popped up next to our names.

So we went into the admin page to see if we had some other option, like maybe something non-human or a female avatar if necessary.  These were our options: 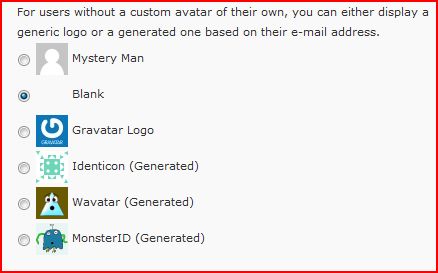 First, blank is really the avatar you see in the first screenshot, it’s neutral which, in reality, is male.  So there is no way to opt out of having an avatar (our tech guy, Jon, is still working on it).

Second, there is no female avatar option.

Third, though there is no female avatar, there is a Monster and a Wavatar option, whatever the hell that is.   So WordPress is allowing you to represent yourself as a Wavatar, but you’re not allowed to be a chick.

NEW (Apr. ’10)! Keri sent a screenshot of her WordPress menu which, she noted, represents the users with two different skin colors.  It’s a nice counterpoint to much of what we see above: 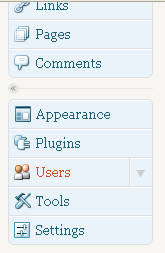 Of course the whole thing is dependant on our socialized assumption that short hair/pants=male and long hair/skirt=female.

But Youtube and Myspace look a bit male to me: if you go for a "3d" look an average woman should have curves - more curves than a male, anyway. (With "3d" look I mean to exclude an avatar like the one of Blip FM, where the characters are "flat".)

i love the friendfeed avatar :)

Huh. To me, that's "people with short hair", not "men". Like me, for example, and at least half the women I know.

I don't see how Twitter's avatar is any less human than Flickr's is...

I agree, Tw, the Twitter icon is a keyboard face: o_O It's the same degree of human as Flickr's icon.

I like that the Hotmail icon is fat. :-) But even moreso, I like the ones that don't presume a thin body, male/female/ungendered, as the universal subject.

Agreeing with the two comments who have mentioned that Twitter's icon is a "face" the same way the Flickr one is. ｏ＿０ is a Japanese-style emoticon, popular especially with anime fandom (in English communities on the internet; presumably they're used in Japanese communities online as well, but since I don't read Japanese, I don't know).

yammer.com is considering a gender-neutral one... i sent one of their people your post. but i imagine it's not a priority. corporate america remains male.

I get that it looks male, but why does facebook's "no photo" icon look automatically white? Isn't it just a silhouette without any particularly distinguishing features?

Okay, I'm slow. I've been on Twitter a while now and this was the first time I got that o_0 was supposed to be a face. full marks for gender neutral, no marks for ascetics.

we at berlinerstrassen.com have a male avatar... but our primary intention was to make it as ugly as possible. no one wants to be that ugly. so everyone will upload a better avatar immediately...

totally unqualified, it's colored white. also, all of the avatars that have hair appear to have straightish hair, which one could argue is a white characteristic.

To me it seems like ebay has tried really hard to make their person as androgynous as possible -- much less clearly male than the other human avatars and even more so than the neutral avatars that involve a curveless body and round head.

While gender neutrality is a good idea, companies are stuck with two cultural facts. One is that children are raised to assume a neutral character is male unless it has a skirt, long hair, a bow or a baby attached to it somehow. I bet if you did a study asking people to assign a sex to the non-realistic avatars up there, they would be overwhelmingly considered male, except perhaps the vimeo, which is infantilized.

Wish I saw a way out of this.

Doesn't look to me like FriendFeed put any thought into their avatar at all. It looks like they just threw it together.

Also see photos from my various travels depicting global cultural variations of the fundamental person icon.
http://www.portigal.com/blog/body-self-image/
I picked up some good ones in Europe last week and will update the post shortly

[...] up on our recent posts on representations of “person” (here and here), I found this post at All This Chittah Chattah where Steve Portigal is collecting images of signs [...]

[...] at all.  We documented the saga, including all of the options offered by Wordpress, in our post on default avatars. Scroll down. [Gwen notes: I kinda want to be the [...]

The Wordpress avatars are hardly overtly masculine. It's a basic head and shoulders silhouette. What exactly do you expect? Long hair? A bow? What, in your opinion, would a female icon look like?

Exactly how are the avatars next to your names male?

I have to agree with the comments that the avatars with just head and shoulder or even short hair and shoulders do not necessarily have to represent men. Unless they are seen as broad shoulders, which can be a characteristic concerning perceived masculinity, these seem pretty gender neutral to me?

found this deliberately female avatar the other day and was amazed (and delighted) http://conference.archimuse.com/

I do not wear dresses and skirts nor do I ever put my hair in pigtails nor would I were it long enough. I always choose male avatars because 1) they're not wearing dresses; 2) they don't have pigtails 3) they usually have short hair, as I do 3) as we all know, it is advantageous in so many ways to appear to be a man online (to avoid sexism, to avoid misogyny, to get more traffic at your site {did you hear about the blogger who could not get traffic until she pretended to be a male blogger?} and a myriad of others reasons). I understand your point about the lack of female avatars, but seriously, this woman has less of a problem with male avatars than with overly-feminine avatars.

[...] added a representation of “users” from Wordpress that represented people as coming in differen... to our post featuring default [...]

[...] We’ve posted in the past about the way in which “male” is often taken to be the default or neutral category, with “female” a notable, marked, non-default one. For instance, “regular” t-shirts are men’s, Best Buy assumes customers are male, stick figures on signs are generally male, and default avatars tend to be male. [...]

[...] social networking sites need to have a genderless default avatar – and quite a lot do (this post on the www.societypages.org website has a great discussion of this and gives lots of examples of [...]

Lisa, isn't it ironic, this website has a MAN as an avatar by default..I am not impressed, why can you make them change it?

I use identicons as a default on my webcomic because unlike the other two pregens, I don't find the identicons ugly...

This said, default icons just irk me in general.

I am really annoyed that Disqus has only a male avatar! and I couldn't figure out how to change it by logging in with google so I just switched to logging in with facebook

(notice I have a short haircut there; but still, the disqus av is totally a man, it's not just about the hair)

slacktivist » One for normal people and another one for women — January 27, 2012

[...] We all need someone else who can tell us, “Look behind you.”Jam also linked to Lisa Wade’s collection of default avatars at Sociological Images, which is really interesting and shows that the default-white-dude iconography isn’t just a [...]

[...] trot over to one of my favorite blogs, Sociological Images, and check out their excellent posts on default avatars and avatars who parent. (Their other posts are cool, [...]

[…] We’ve posted in the past about the way in which “male” is often taken to be the default or neutral category, with “female” a notable, marked, non-default one. For instance, the Body Worlds exhibit, “regular” t-shirts are men’s, Best Buy assumes customers are male, stick figures on signs are generally male, and default avatars tend to be male. […]

[…] it matter? Does it matter if the default user is displayed as a white man? I think it does. As blog simages remarked way back in […]

do you want to become a member of Illuminati to be rich and famous here is your chance. Are you a Business man or an Artist,Politicians or Pastor and you want to become big, Powerful and famous in the world, join us to become one of our official member today.you shall be given an ideal chance to visit the Illuminati and his representative after registrations is completed by you, no sacrifice, or human life needed, Illuminati brotherhood brings along wealth and famous in life, you have a full access to eradicate poverty away from your life now. it only a member who is been initiated into the church of Illuminati have the authority to bring any member to the church, so before you contact any body you must be link by who is already a member, Join us today and realize your dreams. we also help out our member in protection of drugs pushing, once you become a member you will be rich and famous for the rest of your life, Illuminati make there member happy so i will want you all to also be a member of the Illuminati Thanks contact email on grateilluminaticenter@gmail.com or call +2348072222356

Thanks for every other fantastic post. Where else
could anybody get that kind of information in such an ideal
means of writing? I have a presentation next week, and I am at the look
for such information.