Sexism in Aviation, Then and Now

Before there were flight attendants, there were stewardesses.  Below a vintage commercial for airlines (found here thanks to AdFreak, see also this print ad):

While pressure on airlines to be less sexist means that we don’t see ads like this anymore, Stephen W. alerted us to the ongoing sexism in “general aviation,” that is private planes and jets owned by individuals and companies.

Airports have FBOs (or “fixed based operators”) which are, essentially, glorified gas stations for planes.  A private pilot can choose which airport and thus FBO, or which FBO at which airport, to patronize.  So FBOs will compete for customers.  Stephen pointed to one strategy: plying pilots, assumed to be men, with sex.

Flower Aviation promises that you will be guided into your parking spot by “girls in short ‘skorts’ and tank tops.” 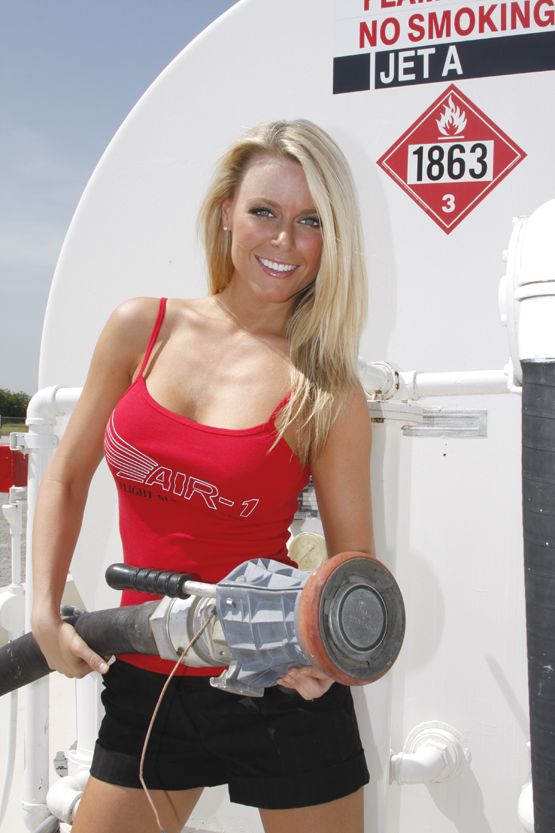 Here are some of the images from the website, notice that when you spend money on fuel, they reward you with red meat (and fresh baked chocolate chip cookies): 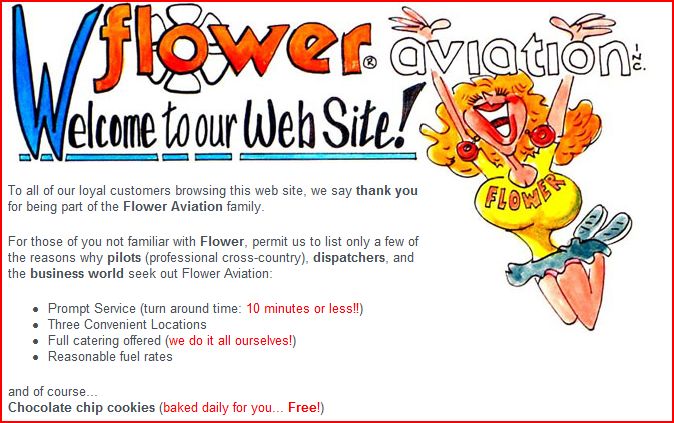 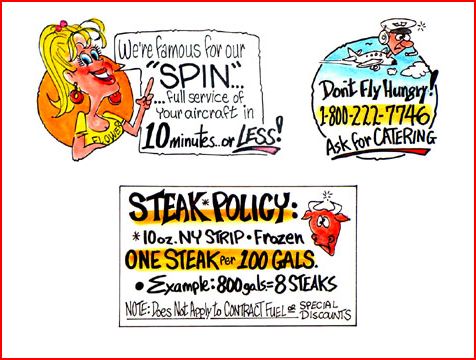 So, there you have it.  Private aviation, still very much a man’s world.

Other than the objectification, I think an interesting sociological question might be: Why have the airlines dropped overt sexist advertising, while general aviation has not? One possibility is that general aviation is, literally, less public and, thus, less vulnerable to public censor. Another may be that pilots are still overwhelmingly men, unlike the customers served by airlines, and so there may still be profit in sexism for general aviation, but not in commercial aviation. I’d welcome your thoughts as well.

You think you know about the world and then you get introduced to a whole new idea: the conflation of sex with fuel loading. What kind of strange reverse penis envy is this?

There's a strange ad campaign I've been seeing recently for both Korean Air and China Air - very much emphasizing the subservient Asian female flight attendent. I've been looking on You Tube and I can't find the one I've been seeing lately, but this one (http://www.youtube.com/watch?v=QWaafbESmjI) is even weirder.

Nice that they are at least consistent in their treatment of those who did not have the privilege of being born as human males -- commodifying the bodies of both women and animals. *eyeroll*

[...] In another post miz_geek pointed us to this Korean Air commercial, pointing out the reproduction of the [...]

[...] In this post, I’m going to talk about the terminals serving private planes (also posted about here).   If you fly by private plane, you don’t go to the main terminal.  There is a separate [...]

[...] In this post, I’m going to talk about the terminals serving private planes (also posted about here).   If you fly by private plane, you don’t go to the main terminal.  There is a separate [...]

I love aviaition 2 much. i think i'll die an aviator and preacher

[...] see this post on sexism in aviation (then and now) and this contemporary Continental ad with sexual [...]

Back into the commercial realm - This Virgin Atlantic ad from last year uses a bit of 'retro' sexism?

Do Not Criticize Flower Aviation. I've been there. A small country town in the middle of Kansas and it has been voted one of the best FBOs in the country. Lower fuel prices, incentive programs and steak for pilots, and yes, pretty women is just good business. The women know what they are doing, and Flower doesn't make the poor girls wear short shorts in the middle of winter. Stephen W. you male traitorous sissy. You should have your ManCcard revoked. Go attack Hooters with your sexist B.S.

I volunteer every year at Sun n Fun (a pilots' convention with attendees from all over the world). Believe you me, private aviation is very much a male-dominated field. The people who attend often are also into motorcycles, speed boats and sports cars and have women on their arms in tiny skirts and high heels. There are female pilots, jumpers and aerobatic performers, of course, but they are vastly outnumbered by men. Lots of military aircraft and personnel at these events as well.

[...] Aviation market studies indicate women make up 26% of the prospective pilot population.  Only 7% of all pilots are female.  Unless serious action is taken, I doubt anything will change soon.  More on the subject here: Sexism in Aviation, Then and Now. [...]

I have been in commercial aviation for over 20 years. Part 91 (general aviation) is where airline pilots get their ATP's before they can go from corporate/charter/instructor to an airline gig if they so choose. The misogyny in this sector is so bad that it is amazing that any female can get enough hours to qualify for a flight gig. If one were to add in other factors such as transgender and other things of that nature, aviation presents itself as as archaic as crossburnings and witch trials.