Kelebek and Laurie L. both let us know about a recent example of the use of images of dead or brutalized women in fashion advertising. A recent catalog, titled “Deadly Deals,” from the Australian clothing chain Rivers, included this image (via The Age): 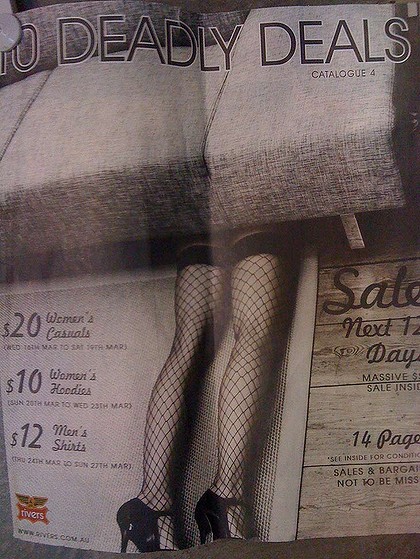 And way back in July of last year, Caroline submitted an article from Amazing Women Rock about an ad for Beymen Blender, an upscale clothing boutique in Istanbul. The ad shows a woman’s dismembered body hanging from meat hooks; it and the rest of the photos below may be triggering for those sensitive to images of violence toward people, so I’m putting it after the jump.

However, Dmitriy T.M., Melissa F., and Noelle S. found an example from the October 2010 issue of Interview magazine that inverts the usual gender pattern by showing a woman with brutalized men. The photo shoot was apparently supposed to evoke the types of torture and murder used by organized crime in Russia.

In this case, Naomi Campbell is shown in positions of dominance over an extremely pale-skinned, and clearly badly injured, man. So those images reverse not just the usual gender dynamic in images of violence and brutality in fashion photos, but also the frequent pattern of seeing naked or partially-naked Black bodies displayed as props around more fully-clothed White bodies (though Campbell is certainly scantily clad and sexualized). I suppose you could see this as undermining or commenting on the images we often see of violence toward women in fashion. Yet we could also argue that it does so by reinforcing the association of Blackness, in particular, with violence and aggression. And the photo shoot includes the same sexualization of violence seen so often in the fashion industry.

The Naomi Campbell shots do indeed reverse a lot of standards in fashion shoots, but it's a good example of reversal that doesn't make me feel any better. Deeply, deeply disturbing.

While I think your last statement is certianly true, the images of Naomi Campbell are dominant in the pictures, I feel that the last segement of pictures speak more to the racial aspect rather than the gendered one. Black Women are always pictured as violent and aggressive and this magazine spread is no different. In a racial context, these images speak to the fear of the white group being overpowered and - in this case - murdered by a Black Woman. Subliminaly it tells white men that they should fear black women because they will destroy them.

The second picture of Naomi wrapped around a dead white man also speaks to the primative and animalistic nature that is almost always associeted with women of color in magazine articles. Again, it implores a negative connotation of black women in the media.

I agree with you that gender is completely strewed when consumed by the media, but I also think that race is in that category as well.

These make me wonder why anyone would buy the stuff they're advertising. Creeps me out so much I don't want to look at them, and couldn't tell you what they are trying to sell.

Dear God, that one of the dismembered woman makes my physically ill to look at. Who came up with that?! I know enough people like the Saw movies to make it worth making seven (or however many there are now) but seriously, that goes beyond good taste and then some.

The dead or brutalized women are commonly displayed in a "sexy" way, emphasizing their hotness. This guy's hotness is displayed a little in the 3rd picture but hardly at all in the others. So not a total gender inversion. If they were to aim for such an inversion, they ought to deliberately sexualize his image a lot more. Well, at least he's naked.

Also... the phrase 'Deadly Deals' is a bit strange because in Australia 'deadly' is a term meaning cool/excellent, notably commonly used in many Aboriginal communities (we actually have 'The Deadly Awards' which are awarded to outstanding Aboriginal and Torres Strait Islander people). My first reaction was, 'Why would texts from Aboriginal communities include a picture of a dead-looking white woman's legs?' lol

First, the juxtaposition of the Naomi Campbell shoot with the fashion ads (and under the post's title) might mislead many readers into thinking that those photos are also fashion ads. But despite the presence of a famous model, they are not. They're an artist's illustrations for an interview in what is decidedly not a fashion magazine.

Whether that distinction is important probably depends a lot on how wide of a latitude you can give a commercial trade to appropriating and absorbing elements of outsider art. I notice that almost every time an ad is examined on a site like this, at least one commenter pipes in and says something like "this doesn't make me want to buy that!" Of course, an approach like that is often irrelevant to the norms of high fashion, since we're talking about an industry that whips its hype machine into frenzies over products (for example, the provocative concoctions in runway shows) that are not actually for sale.

But it brings up an interesting point about how we "read" images when we perceive them as commercial. Without the Blender logo in the corner of the second image, I suspect most viewers would automatically see it as an improvised, cut-and-paste satire of fashion photography, Maybe the work of a young art student trying on a visual pun of how the industry treats models like meat. Note that from her facial expression she appears neither dead nor brutalized; she's very much alive and performing a pose while her body is treated like consumable materials fully detached from her consciousness. That's a pretty good representation of what modelling often feels like.

(Speaking of puns, it's quite a stretch to see anything explicitly violent in the "Deadly Deals" picture without the text, unless I'm missing some pop reference to a sexy lady being killed by a falling sofa. It looks like a very untalented player of Hide And Seek to me.)

But I digress. The question is, when we're dealing with creative professions (fashion, photography) that already intersect heavily with the arts, does the presence of commerce automatically negate the possibility of ambiguity or non-commercial ideas in the work we see? Or is there room for nuance?

Violence in any form repulses me. I find the Naomi Campbell images extremely disturbing; that they are supposedly "art" makes no difference.

Readers of this thread might also find this post interesting, I wrote it around the same time as the butchered woman one:

Thanks for giving me credit and a link to my site re the butchered woman ad. I appreciate good internet etiquette.

Oh my God! How disgustingly sickening! Those that think this is appropriate need immediate and intense therapy. I'm sorry I looked at the pictures.