Advertising and the Eskimo

We’ve discussed American Indian mascots, advertising featuring anachronistic caricatures of American Indians, the ice skater who appropriated aboriginal culture, the lie at the heart of the famous crying Indian PSA, and the stunning irony that is Avatar, but we’ve never directly addressed the use and appropriation of the idea of the Eskimo.  The term refers to the Inuit and Yupik people in Eastern Russia, Alaska, Canada, and Greenland.

Russell Potter, a professor of English at Rhode Island College, collected a few vintage advertisements featuring the idea of the Eskimo.  He argues that they fall roughly into two camps: cheerful adorable Eskimo and the Eskimo as primitive and backwards.

These first two for apples and ginger ale fall into the first category: 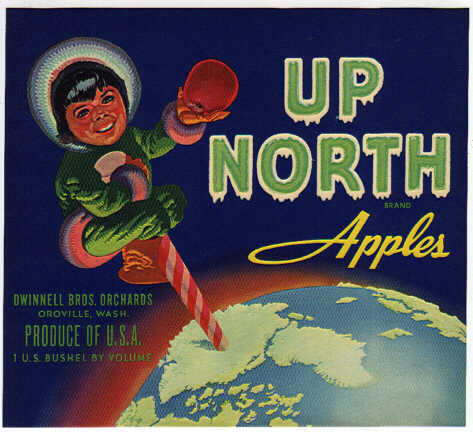 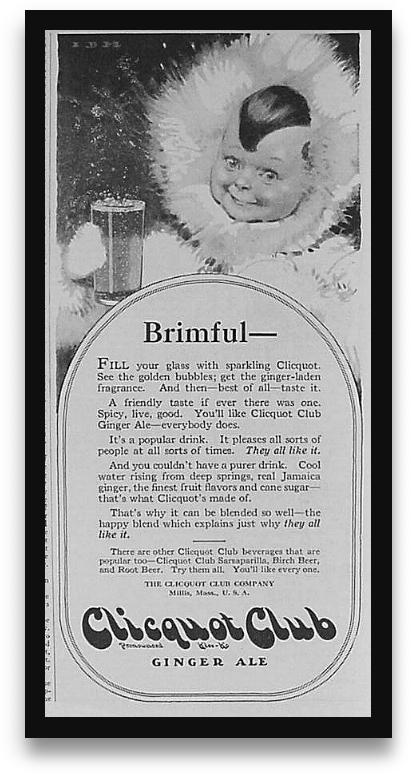 But this ad presents the “Esquimaux” as “dull” and Grape Nuts as civilized: 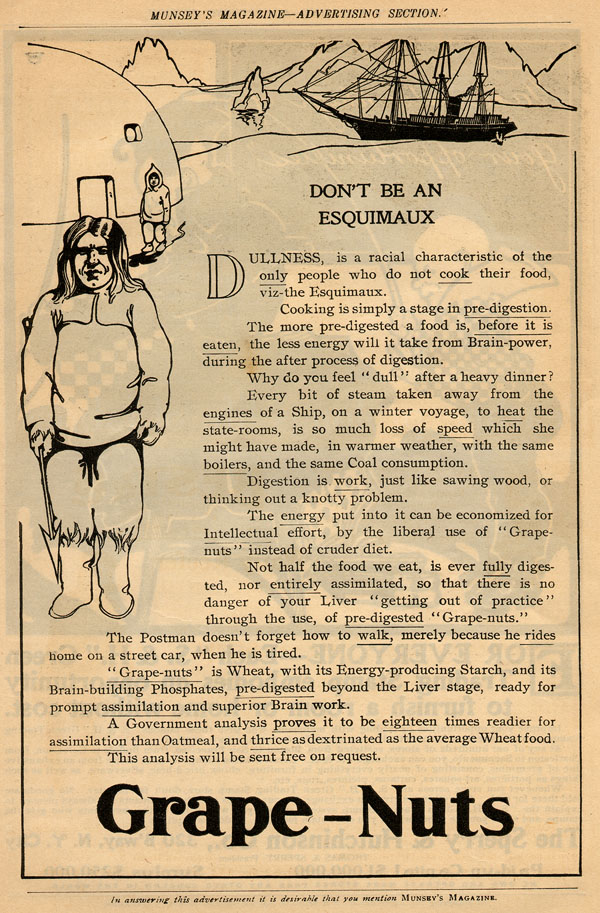 Building on Potter’s collection, Adrienne at Native Appropriations posted some more contemporary uses of the Eskimo.

Eskimo Joe’s (Stillwater, OK) uses an image of an Eskimo looking downright ridiculous and very much like his dog: 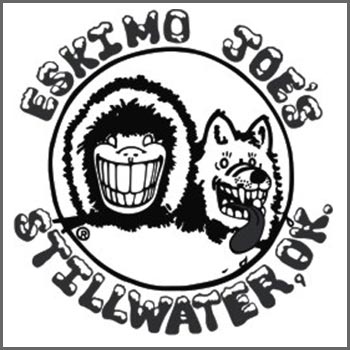 Any child of the ’80s probably remembers the Lisa Frank Eskimo girl (which Adrienne points out looks decidely anglo): 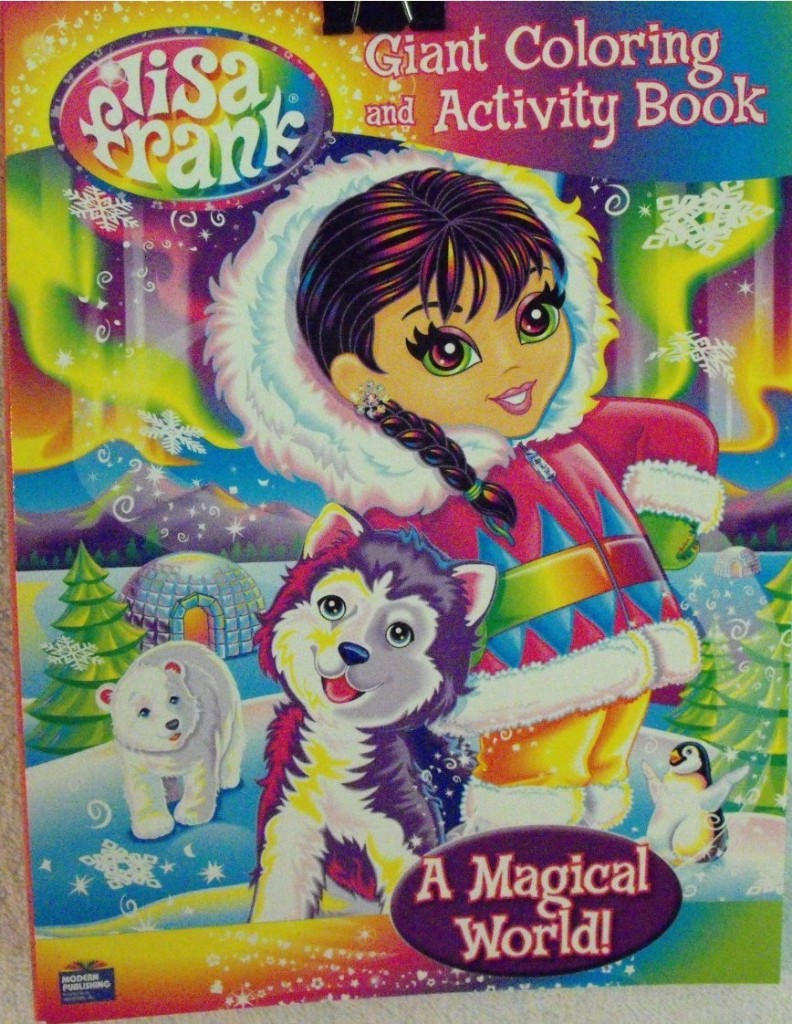 And this ad seems to suggest that even decapitated walruses speak better English than Eskimos: 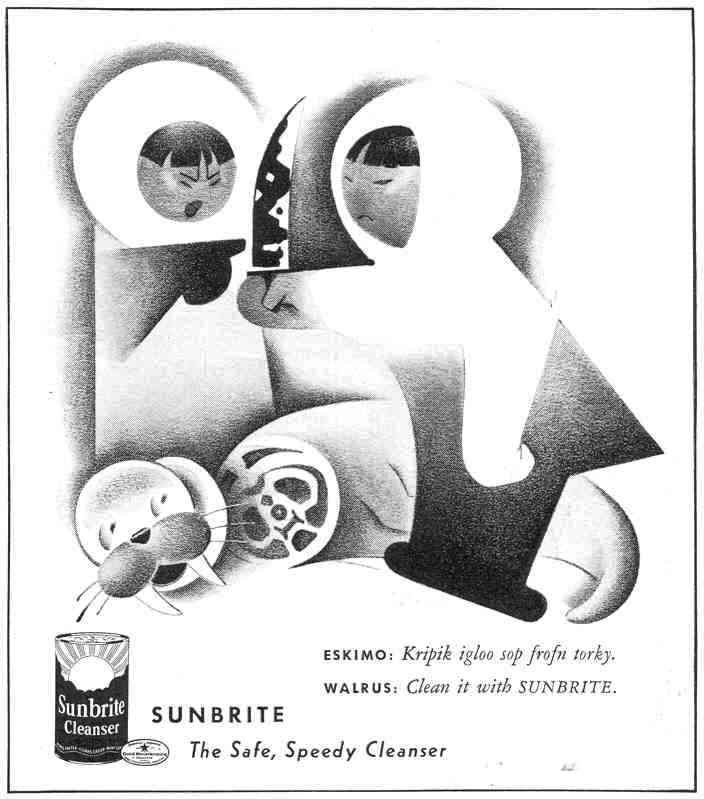 Here’s another example of the childlike Eskimo, tweeted to us by @Matthew_Kneale: 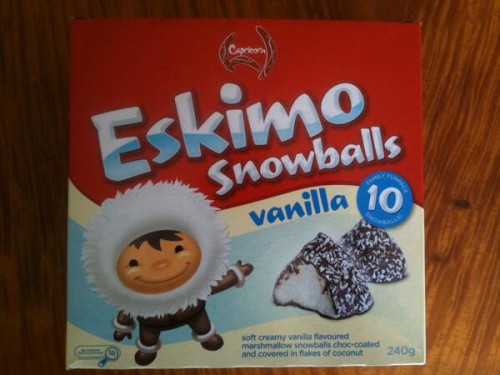 All of these ads turn Eskimos into (cute but inferior) childlike figures or (deficient and inferior) backwards adults, or some combination of the two.  For a population with essentially no contact with the Inuit or the Yupik, the idea that they are real human beings can become lost.  When real members of a group are invisible, imaginary representatives can be demonized or romanticized as we see fit.

Is it ok that I was way more fascinated by the bizarre pseudoscience in the Grape-Nuts ad?

Interesting but slightly off-topic, Russian popular culture also uses the idea of "Eskimos" (in their case, the Chukchi people of far northeastern Russia) as "(cute but inferior) childlike figures or (deficient and inferior) backwards adults, or some combination of the two." There's a whole sort of "country bumpkin" genre of jokes involving "the naive Chukcha girl" who doesn't understand technology or other aspects of modern life.

Umm.... Is anyone else really disturbed by the recently slaughtered walrus advising its killer on how to properly clean the instrument of its death?

As *if* a polar bear and penguin would ever have a meet-up, they live in completely different hemispheres! ;)

I remember that Lisa Frank picture from the '80s. I had no idea it was supposed to represent an Eskimo, rather than an Anglo child living in or visiting a cold climate. I had a parka like that in the '70s, with all the fake fur trim around the hood, cuffs, and the bottom of the jacket. (Mine was all in shades of blue, rather than hot pink with blue trim, but I don't think my polyester one looked more or less authentic than the one in the cartoon.) The kids (also Anglo) down the street had a plastic mold for making snow into big blocks--it was marketed as a device for kids to build their own igloos, but we never built much of anything before it got squashed.

I don't see in the apple, ginger, or coloring book the use of eskimo or Inuit. Where is the evidence that those images are to portray Inuit?

I think Kenny of South Park kind of fits into the same visual representation and also fits a similar character profile (similar to the Russian version of Eskimo people describe above). I wonder (half jokingly) if they're connected.

Isn't "Eskimo" considered to be an offensive term for the Inuit? (I don't know how the Yupik feel about it...). To me anyways, the term strikes me as being about as current as "Indian" or "Savage".

I wouldn't say that the Lisa Frank girl looks "anglo." With the braids and dark skin and the pattern on her coat, she strikes me more as a stereotypical Indian maiden who got lost in the north.

How images of Inuit people been used in advertising - Critical Homework — April 2, 2020

In advance of that, your assignment for Thursday,April at 8 am, is to review the following blog post, entitled “Advertising and the Eskimo.” As you read the post and look over the images of products that feature Eskimos (in either the product name or — April 2, 2020

The Course Of This Class Is About What Is Media. - Critical Homework — December 8, 2020