Here is a video of the famous “crying Indian” anti-littering PSA from the early 1970s:

The actor, Iron Eyes Cody, was not actually Native American, he was Italian American. You can read more about him at snopes.com.

In case you didn’t know, the famous “Chief Seattle” speech about the need to honor the earth and care for the environment was written by a white guy, also in the early 1970s.

These could be interesting for discussions of environmentalism and American Indians. Why do environmental messages somehow have more authority if they supposedly come from an Indian? Would the “Chief Seattle” speech be less meaningful if we knew a white guy wrote it? Why?

They could also be used in discussions about the appropriation of Native American culture and the use of non-Indian actors to play Indian roles. It’s also interesting as an example of how American Indians are often depicted as historic throwbacks who are still living in the 1800s (and are all from plains tribes and wear big headdresses): even though it was 1971 and the guy was standing next to a highway full of cars, he was dressed in buckskin and feathers. Because, you know, that’s what Native Americans wear, all the time. Believe me, back in Oklahoma, that’s all you see.

NEW: Another fallacious Native American environmentalist was Grey Owl. Grey Owl was a Britain named Archibald Belaney who adopted an Indian identity and became famous in Canada for his conservationist stance. Here is his wikipedia entry. 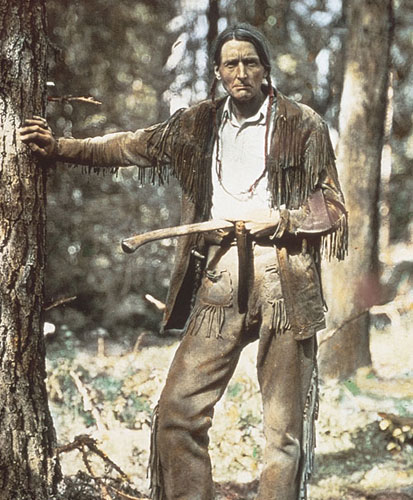 The last paragraph made me laugh out loud. Well done. I like my delivery so dry you can plant cactus in it!

[...] “plains Indian” outfit, the portrayal of Native Americans as though they all still run around in buckskins, the play on a made-up version of “Indian” language, and the stoic face. addthis_url = [...]

For analysis of relationships between indigenous peoples and nature, I recommend Murray Bookchin's The Ecology of Freedom --
specifically, a copy that includes the 1991 foreword.

[...] Tilden’s intentions of making this statue was not to showcase Native American culture, but to give another meaning that has absolutely nothing to do with the culture itself. Stop trying to figure out if it was for [...]