The number of Americans under correctional control has more than tripled since the 1980s, up to 1 in 31 U.S. citizens.  And the U.S. incarcerates six times more of its citizens than many European countries.  As you might imagine, this is very expensive.  Between 1987 and 2007, the amount spent on corrections increased by 127%.  To put this in perspective, the amount spent on higher education has only increased 21%.

The Pew Center illustrates the disparity: 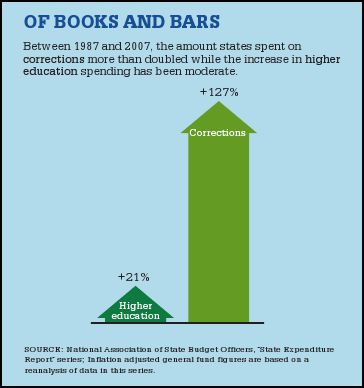 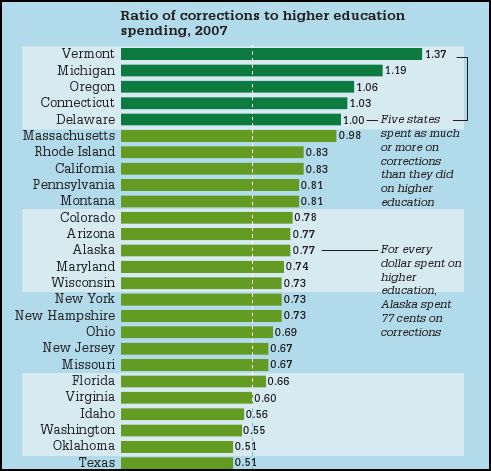 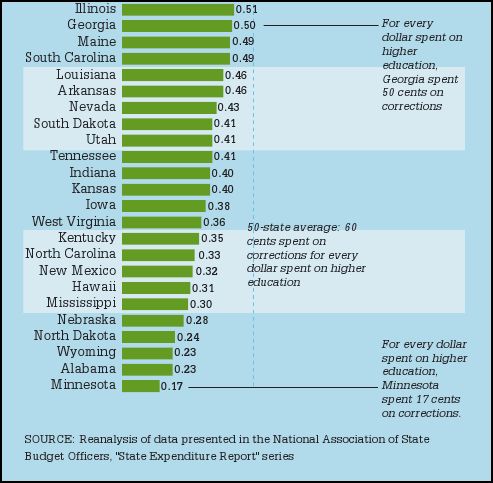 [Sorry for the initial confusion with the graph.]

I may be reading something wrong, but your text and the graph seem to be saying the opposite ...?

Yeah, I agree with Erin, the text says the opposite of what the graph does.

The information in the linked Pew Report indicates (on page 15) that higher ed funding is experiencing much slower growth, but in terms of raw dollars ($33 billion in 1987 to $72.88 in 2007) billion it's still significantly higher than corrections funding ($10.6 billion to $44 billion over the same timeframe.) The 21% and 127% figures come into play once you adjust for inflation, so I am pretty sure the chart--which is a raw dollar measure--is correct in its titling. The ratio given in the chart is corrections:higher ed (i.e. in Minnesota, every dollar spent on higher ed is met with only 17 cents for corrections.) and the commentary was flipped.

I would imagine the "three strikes" policy has a large part to play in this.

Actually, you are still reading the graph wrong. The ratio is the smallest for states where the value is very close to 1. A 1:1 ratio is the most balanced.

Why are they comparing corrections spending to higher education and not,say, road building?

Is the assumption that all these criminals might just as well be matriculated into college? If so, I highly doubt it.

I find these graphs to be a statistical novelty, but not actually informative. They elicit a response that is emotional rather than logical, but the data is not actually very helpful.

For instance, I went to the Pew report and looked at page 31 to examine the data from which the second graph is derived. If we take as a sample Michigan (ration of 1.19 education-to-corrections spending) and Alabama (ratio of 0.23), the data for "State General Fund Higher Education Spending, FY 2007 (in millions)" gives Michigan's high ed spending as $1,728 compared to Alabama's $1,712 (p. 31). So the higher ed spending, at least as a comparison between these two states, is fairly comparable. The difference in ratio, then, comes from greater spending on corrections.

On page 29, the data chart for "Prison Population" gives the Michigan count (as of 12/31/06) as 51,577, and the Alabama count as 28,241. So, Michigan is providing funding for a prison population of nearly twice the size of Alabama. I would also hazard a guess that the cost of wages for corrections officers is substantially higher in Michigan, which is heavily unionized and has a higher cost of living generally, than in Alabama.

I think it is a more complicated issue than these charts suggest, and I don't think the comparison of higher education spending and corrections spending is particularly helpful in advancing the underlying argument of the Pew report generally, which is that the United States has had a rapid increase in prison populations and that this is a major social issue (arguments I would agree with).

interesting that Oregon is so far up the list, we have had Democratic governors for some time, they claim that prison jobs are "family wage, good union jobs" (that's a direct quote from a "progressive" former State Senator I know.

But, in defense of spending money this way, the state Universities here are controlled by the sports departments, so I am not really sure that spending more on the Universities is a good idea, either.

It's a pretty poorly run system. We are the Mississippi of the West......