From the Pew Center on the States report, One in 31: The Long Reach of American Corrections, “Adding up all probationers and parolees, prisoners and jail inmates, you’ll find America now has more than 7.3 million adults under some form of correctional control. That whopping figure is more than the populations of Chicago, Philadelphia, San Diego and Dallas put together, and larger than the populations of 38 states and the District of Columbia. During Ronald Reagan’s first term as president, 1 in every 77 adults was under the control of the correctional system in the United States. Now, 25 years later, it is 1 in 31, or 3.2 percent of all adults.” 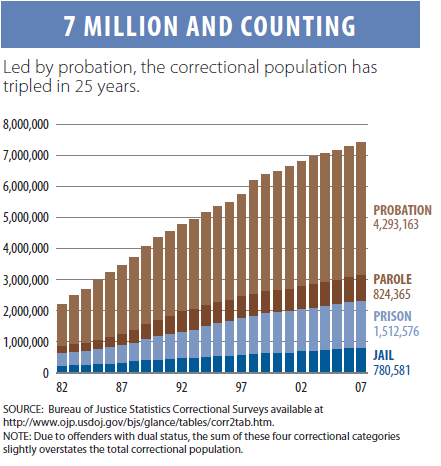 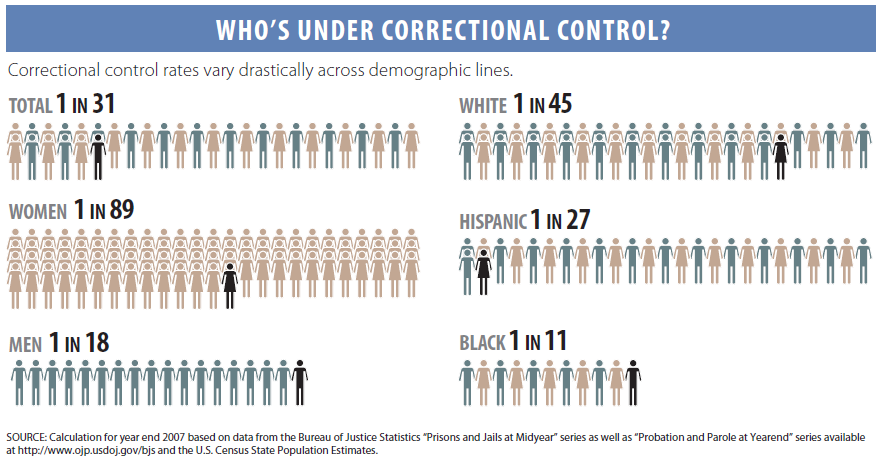 See the press release for a quick summary and the full report for much more data.

I was thinking maybe a gulag would be nice?

What's the difference between Jail and Prison?

the diffference between jail and prison is primarily the time length. Jail is for those waiting for sentencing and sentences up to one year. In prison, someone has already been sentenced, is through with court dates and will serve a set time length.

[...] see our posts on America’s high imprisonment rate (here and here), the percentage of children with a parent in prison, by race, black/white disparities in [...]

[...] Then, of course, we police black neighborhoods more aggressively than white neighborhoods, convict black people more frequently than white people, and send them to prison more often and with longer sentences (see also this post). [...]