I’m trying to catch up on some of our email, so you’re getting another round-up of similar-themed items, this time on the gendering of food. Laura L. sent in an advertisement for Muscle Milk, a product generally marketed to men, that she saw on the BART (San Francisco’s public transportation system). The ad presents the product as a means to become more attractive by building muscle — a body type usually encouraged for men but not women — and thus gain sexual access to your friends: 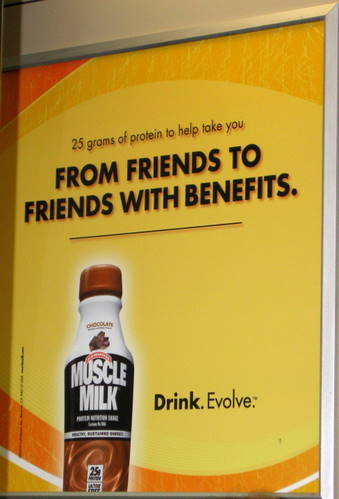 It’s interesting because it’s a gendered product that uses a tactic common in products that market to women: you’re body isn’t good enough, but our product will fix it. It’s not the first time the company has used tactics more often seen in products aimed at women.

In another example of the association of meat-eating with men, Tom Megginson, who blogs at Work that Matters, sent us a link to a story at AdFreak about KFC’s inventive promotional campaign for their Double-Down sandwich, which, if you didn’t know, consists of bacon and cheese between two chicken breast patties (fried or grilled). The promotions, which started in Louisville, KY, involve undergrads wearing sweats with “Double Down” across the butt and giving out free stuff: 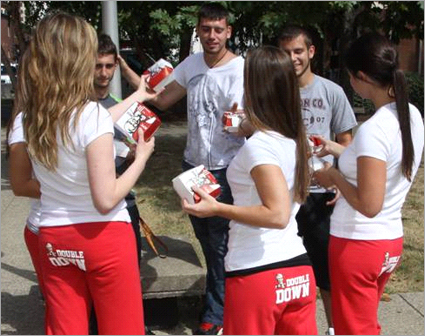 The KFC announcement of the program makes it clear that only women are wanted as “brand ambassadors” to help them meet their “key target of young men.”

While men are encouraged to eat high-fat/sodium/calorie monster/mega/ultra/double meat-based items, women, of course, get to eat yogurt. Brianna L. found this Australian commercial for Yoplait Formé, in which women are shown eating foods that are clearly meant to appear unappetizing and illustrate they are sacrificing flavor for their diet, as well as policing one another’s food choices:

Notice at 12 seconds in they all wave away the plate of cookies, but then, just for a second, one of the women shows weakness and starts to reach for one. The woman next to her, however, quickly reins her in with a disapproving look and gesture. As Brianna points out,

Even the tag line “feel fuller for longer” shows eating is not about sustenance, or taking pleasure in food. Being in perpetual hunger – that’s the status quo, at least until a magic yogurt comes along to save you.

yogurt may be one of the least satisfying things, ever.

I like good yogurt - but I'm somehow made to feel bad or quaint because I tend to like the low fat or even full-fat organic varieties that have strong flavors. That's somehow like eating dessert, even if it the nutrient profile is actually not that bad - particularly when you dump in a bunch of fruit and whole grain cereal and just biked into work.

I love good non-fat vanilla yogurt, added with my favorite goodies, such as granola & berries. I think it's way more satisfying and healthier than a bowl of cereal and milk. I don't like how it's only marketed to women (though i did see an Activia commercial campaign with men trying the yogurt).

Notice that according to the ads, only white and Asian women are interested in staying thin. Although the beauty game is oppressive, black women aren't even considered players.

And this is why almost everyone seems to think that I somehow forced my husband to go vegan. He actually decided to first and I decided to join him in it. People who knew him fairly well probably do have more of an excuse as he did use to only eat animal products (plus a bit of bread and ketchup). Even I thought it would only last a week at most, seeing how much of a veggie-hater he was. That was nearly a year ago and he can't imagine going back, he says.

Though, funny enough, he still tends to go for the more "manly" sounding recipes like deep-fried seitan, whereas I'm the one eating salads. But the kale smoothie with frozen fruit and soygurt? That's his thing! And he LOVES them!

On a related note, anyone else noticed that the ads are all for animal products? It's meat for the men, milk for the women. If stuff like yogurt is so good, why such intense marketing? And do people really trust ads as a source of nutritional information?

I love yogurt, especially greek yogurt. I have it for breakfast with some nuts stirred in most days.

As for the double down, my ol' man and I have made a vegetarian version with Quorn chicken patties, cheese and Yves veggie bacon the last few weekends. OMNOMNOM.

I have to think of the "Perfectly Protein" beverages (shakes?): a high-protein drink probably not terribly different from "Muscle Milk" but, as far as I can tell, either gender-neutral or actually aimed at women.

Personally, I love rice cakes, celery, and tuna. Always have.

I get really sick of commercials dissing healthy snacks to try to promote their own. Obviously they're trying to make other healthy snacks look unappealing and unsatisfying so that the yogurt looks amazing in comparison, but it's just so silly to me. Of course eating a plain rice cake wouldn't be that great, why not put a bit of peanut butter or hummus on that thing! Plain tuna fish straight out of the can, who does that?! One piece of plain lettuce? That's just ridiculous!

I love yogurt but the commercials are ridiculous. Why can't men eat it too!? And why insist that yogurt is either a scrumptious amazing treat akin to eating chocolate, or that it's the most healthy delicious snack possible.

As far as the double down promotion goes, I wonder if those ladies were giving the free sandwiches to women too, or just seeking out the men?

The tagline on that muscle milk makes no sense to me: "Drink. Evolve." What? Evolve from what into what? "Evolve" was the slogan for Trojan condoms too, so that's what it made me think of. I also think it's funny that the Muscle Milk is being pushed on man, since chocolate is usually exclusively the domain of women in commercials. I guess the protein makes it an ENERGY DRINK! Hard core!

These kind of adds make me a little angry. These adds contain an ancient old recipe. Man must look muscular and manly to get sex and women need to look pretty because men like to have sex with pretty (in western society associated with being thin) women. AAARRGGHHH

I almost never read glossy magazines. But when I was younger I read them when a friend brought these kind of magazines. When I had looked into the, all the commercials and sometimes even the articles made me feel flawed and I got the idea that the presented products could 'help me'.

Actually...till I was 14 I had never really thought about how my body and face would come over to others. I wasn't happy or unhappy with how I looked, it just wasn't thinking about it at all. And on that aspect I was blissfully happy!

But then...people (mostly men) started to judge me on my appearance (some good some bad, it didn't matter I was being judged on how I looked. Something I had very little power over) And I came in contact with females who wanted to all live up to expectations and mass media. I became extremely unhappy with my appearance.

This makes me mad when I see such an yoghurt commercial.

Haha I've been drifting off....

Chicks with their yogurt, men with their burgers, all the same advertising we've seen before, and I'm not all that surprised. What I drew my attention was the Muscle Milk advert. I know they're advertising to a certain demographic, but what I had a problem with was the line: From friends to friends with benefits. I no opinions towards relationships, fuck buddies, casual hookups, or anything in between, but the ad insinuates that by getting strong and muscular, you can get out of the friend zone and score, as if (1) having sex is all you should care about, (2) you're too skinny and not strong enough like "manly men" (or women), and (3) it doesn't matter what the other person thinks of you, get buff (or beautiful) enough and they'll be all over you, never mind trying to develop some character or intellect.

That muscle-milk ad seems to do one of two things with the concept of friendship:

(1) dismiss the whole idea outright - as though being someone's "friend" is just a stepping stone on the way to their pants. Why would you waste time developing an emotional/intellectual bond with someone except as a way for eventually screwing them?

(2) assume that all friendships are compatible with sexual relations. Physical attractiveness is hardly the only factor - there are a couple of attractive guys I've been friends with for so long (since junior high school) that they're practically family; it would feel so completely, utterly wrong to be "friends with benefits", at least for me.

i have watched that sarah haskins clip dozens of times and it never fails to crack me up. Target Women was such a biting and hilarious critique of the of gendered (ie. virtually all) advertising. you are missed ms haskins.

[...] into another sexist food marketing trap so that a fast food chain can use your behind to sell a salty breadless [...]