To self-objectify is to think of yourself as an object first and a subject second.  People who self-objectify often consider their appearance to be for others and work on their bodies and attractiveness in order to please/not offend an imagined other.  Self-objectification is usually discussed in the context of women.  It is suggested that these women take on the “male gaze,” looking at themselves through an imaginary male judge.

I found this ad in Maxim magazine.  It encourages men to self-objectify by suggesting that they should think about how an imaginary female judge might evaluate their appearance (“She’s totally checking me out MILK Nutritional Shake”). 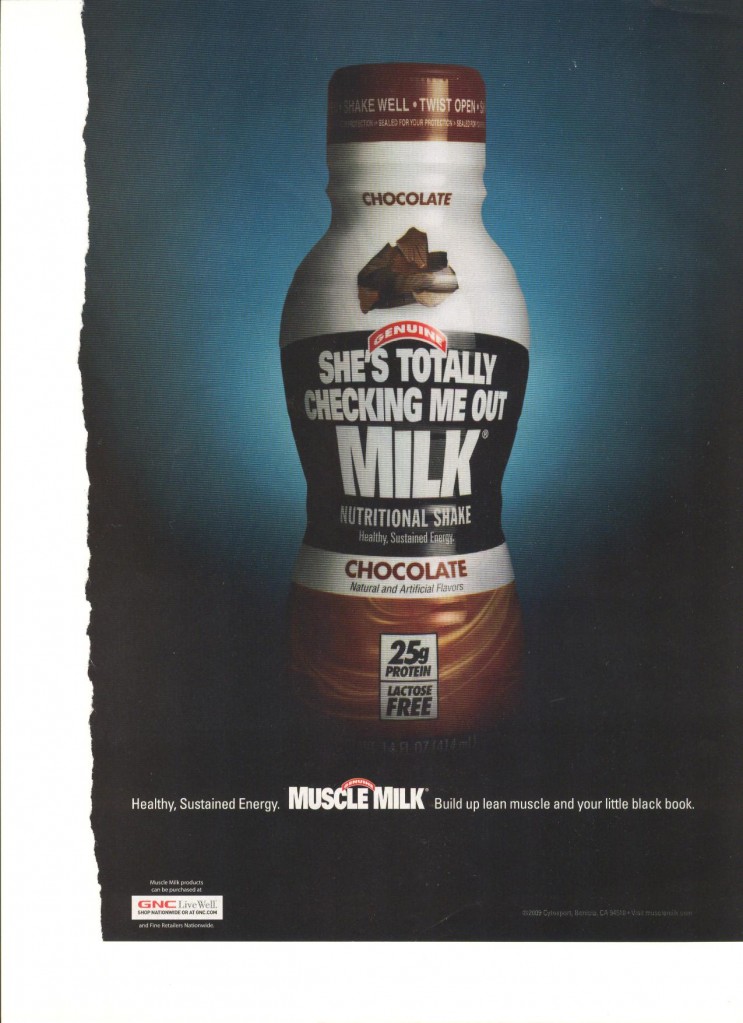 It’s fascinating that a magazine well-known for objectifying women also participates (at least in running this ad) in encouraging men to self-objectify.  Without suggesting that women and men are equally objectified in American culture, I think it might be interesting to talk about the extent to which we live in an objectifying culture, period, and learn to self-objectify whether we are men or women.

I think that to a degree or another, we all care what other people think about us. We are programmed to act like this. Perhaps it won't be with a person's looks, but it could be with appearing dedicated, smart, friendly, tolerant, etc. I don't know why pick on concerns with appearance and label it with as some sort of disease.

And seriously, who doesn't care about their appearace? Most people do, I mean, would you attend to some social event wearing an old shirt with a huge stain?

THAT's what self-objectification means? Seriously? What other purpose does looking good HAVE, but being attractive (or at least, less disgusting) to others? Why should I bother with putting on deodorant if I didn't care what others would think of my BO? I can't even smell the stuff myself.
Seriously, I think this might be the origin of a lot of the problems many men have with feminist critique - we do exactly what you do, but we don't bother naming it, and thinking it's something worth thinking about. It just makes sense. I don't walk around with a mirror all day - hence, anything about my personal appearance (which I cannot see) must be for the benefit of others.