One in every 31 American adults is under control of the correctional system.   The U.S. imprisonment rate is astronomical; it is six times that of many European countries.  This rather new reality is directly the product of the American war on drugs initiated by Reagan in the ’80s.

The Pew Center on the United States reports that the 1.4 million strong state prison population dropped in 2009, the first decrease since 1972. 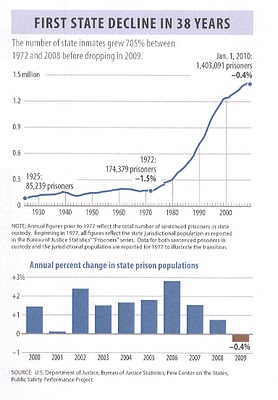 Professor Chris Uggen, at Public Criminology, summarizes the causes identified by the report:

Pew attributes the drop to greater diversion of low-level offenders and probation and parole violators from prison; stronger community supervision and re-entry programs; and, a quicker release of low-risk inmates who complete risk reduction programs. State budget problems have likely played an important role in accelerating each of these trends.

I didn't know that the prison population in the States had been rising. I knew it was high, but I didn't know it had been going up at such a rate. Crime, overall, has been declining for the past 20 years.

I think a part of this is revisiting the automatic minimum sentencing that used to occur with drugs charges. (Of course, this connects to a larger discussion about the War on Drugs; drugs, race and incarceration; etc.) It also -- as Uggen points out -- is in part due to state costs that can't bear continued increases in prison populations at the same time as having shrinking budgets.

It's interesting to note that it appears that the shrinking started to really happen around the time when state budgets started to be cut back (partly on the front end of diminished tax revenues due to the impending recession). In Michigan, the state has been having budgetary issues for several years, often pitting funding for education against funding for prisons (would that we could say "re-education" or "rehabilitation" without sounding Orwellian or ironic).

Saw an interesting story about some law enforcement professionals in favor of decriminalizing marijuana so they can focus on other crimes.
http://consumerist.com/2010/09/law-enforcement-group-legalize-pot-so-cops-have-time-to-fight-real-crime.html

Michigan is the canary in the coalmine when it comes to many, many things, especially mass imprisonment. While it is nice that a *slight* decrease has been noted, we are once again faced with the dilemma: if our laws dictate minimum sentences, and money can be earned by building and incarcerating individuals (prisons receive about $10 billion dollars from the federal government every year, and that's not considering private prisons, which is a whole other situation), then we will continue to see these rates of imprisonment.

Moreover, where is the advocacy? Who is assuring 'quality'? What is and is not humane?

This is a particularly sore subject for me, and this data is a bit interesting, but I don't think that we will ever see a real decrease in imprisonment as long as a profit is to be made.

A couple of thoughts: I don't know much about crunching numbers and such, but is there any reason why the decrease in state prison populations isn't just being absorbed into the increase in federal prison populations? I get that it's a big deal because it's the first decrease in so many years, but can we really use such a small decrease to say anything about what's going on in prisons?

Second thought - I read a couple of months ago that they are modifying the mandatory minimums laws (I'm fairly certain they're not doing away with them completely; just making them less severe). If we can read anything into this decrease, I wonder if it has its roots in some of the same situations led those laws to be changed just this year.