“Entirely Focused on Ensuring Your Comfort”

Lukas B.sent in an advertisement from the February 2010 Hemisphere magazine (the in-flight United Airlines mag). The ad is for ANA airlines’ flights to Japan. The target of the ad appears to be business travelers, represented by a White man. And how to show what a great job the airline will do of taking care of you? Surround said male business traveler with ten Japanese women, there to serve and pamper him: 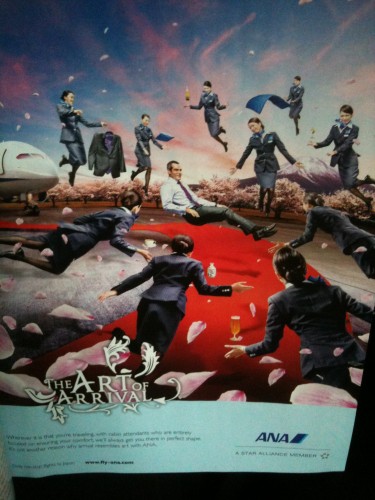 The ad seems to rely to some degree on the stereotype of the submissive Asian woman, or more specifically, the geisha — a Japanese woman trained in the art of serving and pleasing men. There are many ways ANA could advertise, and even lots of ways they could represent good service.The fact that this ad deals with flights to Japan makes a particular racialized idea of service and comfort useful to the company.

At the same time, I’m fascinated by the fact that there are presumably potential customers to whom the idea of being waited on hand and foot while flying would be a major selling point (as opposed to, say, more comfortable seats or tastier food or something).

And, as Lukas points out, they also make sure to throw in the obligatory blossoms that are required in advertising/images related to China or Japan.

I think the main thing about this is simply the quantity of women al converging to serve this man. That tugs at me just a little.
But I do think the rest of this analysis is overblown. I'm recalling the same twitchy calls of "racism" and "sexism" (ignoring the use of "girl" instead of "woman" here) on this post: http://thesocietypages.org/socimages/2010/03/03/multilingual-and-knowledgeable-but-still-a-girl/

We have to keep in mind the goal of any ad like this, and what they must convey at a base level. And simple facts about the industry. 1) Flight attendants serve. Their job is to make the passenger's flight more comfortable. They are in the service industry. Flight attendants, male or female, are supposed to be subservient in a way. Abundance is a way of conveying good service, or at least a good flight. 2) They must use Asian women because it's ANA - 95% of the flight attendants probably ARE Japanese! You can't get around this.

"The fact that this ad deals with flights to Japan makes a particular racialized idea of service and comfort useful to the company."

I'm wondering at which point the racism and stereotypes turn back to US when we see an Asian woman in a position of service-employment, and scream out "SEXIST RACIALIZED GEISHA IMAGERY!"

I'm not saying it doesn't exist. But when you try to read racialized narratives into settings which by their nature have a racial element (Japanese flight attendants helping white business men, rather than native Japanese, as the ad is in English) I think it's a misstep. When you call out "geisha metaphor!" at every chance you get, the stereotype which you try to denounce has clearly already embedded itself inside you.

Yeah, I think it would be a pretty difficult thing, and I'm pretty much 100% sure I won't get around to doing that. I tried various versions of things like "Japanese painting people flying" and even google couldn't help me.

As far as I know, there are no ukiyo-e, kuchi-e, or any other form of print resembling this. However, what previous comments are missing is that there is indeed a very racialized and stereotyped idea of Japanese women among North American and European men, and this add is very obviously playing on this.

The idea of 'Japanese women as subservient f-- toy is pretty prevalent', and is disgusting. Furthermore, ANA seat prices are fairly expensive compared to other flights, and while the majority of flight attendants are women, they most certainly are not all Japanese/ Asian on international flights between the US and Japan. Within Japan (for domestic), yes, they are all Asian, native Japanese speakers, but international flights hire attendants of various backgrounds to serve passengers.

The role of the geisha is very much romanticized in the minds of westerners, especially since the end of WWII and beginning of the American occupation in Japan, where "geishas" became prevalent in an economy and space that had been all but destroyed. I say "geisha" because these women were prostitutes/ prostituted under a self-orientalizing notion that was bought up by American forces. This is an idea that still exists... the mysterious geisha.

Now, looking at this ad and its message, what better way to sell seats (that the average person will not be able to afford, speaking from experience), than to business people (read stereotype--men) who probably already hold very stereotypical views of Asian, specifically Japanese woman as servant. Add to this the idea of 'Japanese service/ quality' and you have yourself a very clever marketing ploy.

This has everything to do with gendered, racialized expectations, and very little to do with 'art'.

Perhaps only tangentially related, but I've seen these figurines in Japanese airports, depicting ANA attendants through the years. They're all female; they don't look ethnically Japanese, but that's common in things like Japanese animation, where a blond-haired purple-eyed person is still understood to be Japanese... that's a whole other post :)

Anyway, the figures seem to be a strange convergence of cute, collectible, historic, and fetish-y.
http://openthetoy.blogspot.com/2009/06/ana-2005-stewardess-uniform-figurine-by.html

Anyone else seeing a Mary Poppins thing going on here? Magical women who fly down and take care of your every need!

"A spoonful of liqour helps the plane get on the ground/In the most delightful way!"

Kind of off-topic: You know, people get so twitchy when you call something out for subtle or unintentional racist imagery that I've started calling advertising "racially problematic" instead of "racist", just like this blog post did. It keeps other people off the defensive. If I say "racist", most people think I'm saying that whoever made it was a KKK member, not someone who has been influenced by institutionalized racism and created an ad that reflects that negative message. "Problematic" and words like it put the focus on whatever I'm talking about instead of the person who made it, which keep people listening long enough to possibly understand my point about the way culture influences advertising and advertising influences culture. Has anyone else found themselves having to do similar things to keep people from shutting down immediately when you bring up race issues?

I had to chime in, because I have seen the female targeted version of this in a magazine. It has a blonde woman encircled by floating Japanese (Iron?) chefs. After some googling, I found the ad company that made it, and the image is on their website. www.montalbetticampbell.com, gallery 3 image 10. image 9 is the version being discussed here...

Also, I have flown to and from Japan on ANA 4 times and flown on ANA within Japan a half dozen times or so and I have never seen a male flight attendant. Unfortunately, on none of these flights have I been attended by a host of chefs.

[...] Compare this advertisement for ANA airlines’ flights to Japan, from the February 2010 Hemisphere magazine (the [...]