Undifferentiated Groups of Asians as Props 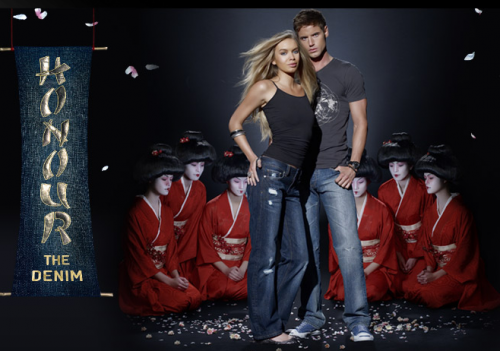 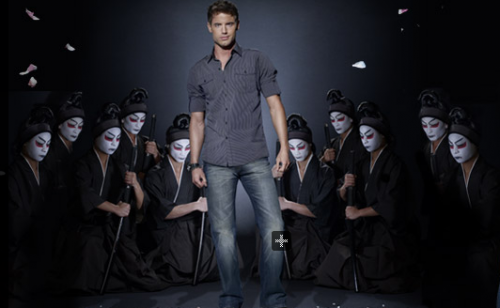 Oddly enough, Andrea J. recently sent us a link to the Palm Pre “Flow” ad, which has a White woman using the Palm Pre while a group of identically-dressed Asians, none shot in a way that presents them as individuals, dancing around her as she discusses how nice it is when everything rearranges itself to do just what you want:

NEW! (Oct. ’09) Macon D. found another example of the use of generic, undifferentiated Asians as props.  This time in a performance by Shakira:

She gives the same performance on Saturday Night Live.

This reminds me a lot of some images from Britain’s Next Top Model that Lisa posted about last year, in which Africans were used as background props in a photo shoot with the contestants. The Asian individuals in these two ads are an undifferentiated mass, strikingly dressed and posed to show off the subjects of the ads–the White people who are foregrounded and depicted as specific, individual human beings rather than an interchangeable member of a group.

For other examples of non-Whites used as props, see our post about a fashion spread in Vogue Italia and this photo from NYLON magazine.

The reality is that all of these people have similar skin color. Face it - you're a racist prick.

I guess they all look the same to, say, the person who directed the intern who did the photoshop to make the crowd larger.

"The reality is that all of these people have similar skin color. Face it – you’re a racist prick."

Oh God, you're one of those, "Racism only exists because
you keep talking about race" types. I guess
you're color blind too.

The palm pre ad simply trades on people's familiarity with China's mass synchronized dance/acrobatics popularized world wide by the summer Olympics. This has nothing more to do with racism. If it is then you'd have to say that all of us who were so astounded by the summer Olympics synchronized displays--where in some cases humans were hidden within what appeared to be mechanical displays -- were all racist. This is also similar to the current Prius ads, where humans are made to look like undifferentiated masses of green plant life or blue water.

It's a pretty big stretch to find racism in the Palm ad...

Obviously the dancers are being used as a metaphor for the phone. Both are supposed to demonstrate athe ability to deal with incredibly complex and detailed things with great precision and accuracy. The ad would work just as well with any large group of highly skilled dancers/performers. Their race has absolutely nothing to do with the ad.

Is it better or worse that the "Asians" in the first two ads (or at least the first one) don't even appear to be actually Asian? Or else they just didn't want to bother styling real hair.

And don't the first two seem to be referring to Japanese culture specifically? I'm not sure about the second one.. but I don't know if they have geisha like that traditionally in any other Asian countries. I'm just throwing stuff out there, though, I don't know nearly enough about various Asian cultures.

[...] Undifferentiated Groups of Asians as Ad Props » Sociological Images This reminds me a lot of some images from Britain’s Next Top Model that Lisa posted about last year, in which Africans were used as background props in a photo shoot with the contestants. The Asian individuals in these two ads are an undifferentiated mass, strikingly dressed and posed to show off the subjects of the ads–the White people who are foregrounded and depicted as specific, individual human beings rather than an interchangeable member of a group. (tags: race racism advertising) [...]

Thanks Gwen for these further examples of the common Western tendency to think of Asians in terms of undifferentiated hordes. I think the Palm Pre ad is racist for this reason, but also because it contrasts its faceless, homogenized group with an individualized white consumer at the center. As I wrote in a post about the ad awhile back:

I don't see a problem with the Olympics connection, but why put a white woman at the center of all this vague Asian-ness?

And why make the group of apparently Asian people so homogeneous, and so individually faceless? Why portray them, that is, without a shred of the privileged, pedestaled, bowed-to individuality of the white, "first-world" woman at the center of things?

According to USA Today,

The message of the ad, by agency Modernista, is ease of use. Actor Tamara Hope sits on a rock in an open field surrounded by circles of dancers. In coordination with their synchronized dance moves, Hope shows some of the phone features.

The idea is that Pre is "a little more human and a little more approachable and about making your life better," says [Palm Marketing VP Brodie] Keast, who would not disclose spending. "This is not really for work or play but for one life with many dimensions."

Yes. An ad about "one life," that of a Western white woman, who's using an object that's made "a little more human" by placing it, and the individual holding it, against a faceless, dehumanized backdrop of 1,000 choreographed, synchronized . . . puppets.

Ad makers don't have to have racist intentions for an ad to end up being racist.

this ad also plays into the western trope of using asian 'bodies' as a signifier for technology and efficiency.

[...] HT:Sociological Images for the clip and Erin Lamberty for noting it. [...]

“Easterners” are not collectivist automatons who are poor at analytical reasoning. « Restructure! — September 15, 2009

[...] Figure 2. German (blue) versus Chinese (red) way of life, according to a German art exhibit. The piece was created by a German-educated Chinese woman named Yang Liu. Compare this concept with Undifferentiated Groups of Asians as Ad Props. [...]

And if the ad used white people as the dancers, would you be accusing its creators of racism because they co-opted an Asian art form?

Anytime two races come together in one form of advertising, you can always make the accusation that there's some underlying tone of racism. If you're always looking for it, you will always find it.

So what's your answer...segregated advertising? Or some silly idealized world where only white men are depicted as "inferior" or "an inhuman mass"?

I think that the fact that a group of asian women dressed in traditional clothing are kneeling to two blond white people lit up in light while they seem to be on a sweat shop floor is quite significant. whether intended or not, the ad comes across as imperialist and makes me think of economic exploitation and the need for capitalist consumerism.

Asians portray white people in the same manner in local advertising. You're making this out to be a purely Western issue. The fact is that you've blindsided yourself into becoming a racist yourself by ignoring the fact that races other than Caucasians are just as evenly capable of racism.

I can honestly say that it's people like you who make the rest of the feminist movement look ridiculous.

[...] (EDITED TO ADD: For good measure, Sociological Images has a post examining advertising featuring “undifferentiated groups of Asians as props.”) [...]