In several posts, we have problematized past and present school mascots.  In this post, I discuss the University of Louisiana at Lafayette Ragin’ Cajuns.

Originally, UL Lafayette’s mascot was a Bulldog.  Then, according to the mascot history page,

This was protested by African American activists who resented the association of the multi-racial and -ethnic University with a white ethnicity.  From another perspective, the mascot was questioned on the grounds that “Cajun” had once been a nasty racial slur.

Apparently the University lost Cajun Man when he graduated, so he was replaced by Cajun Chicken: 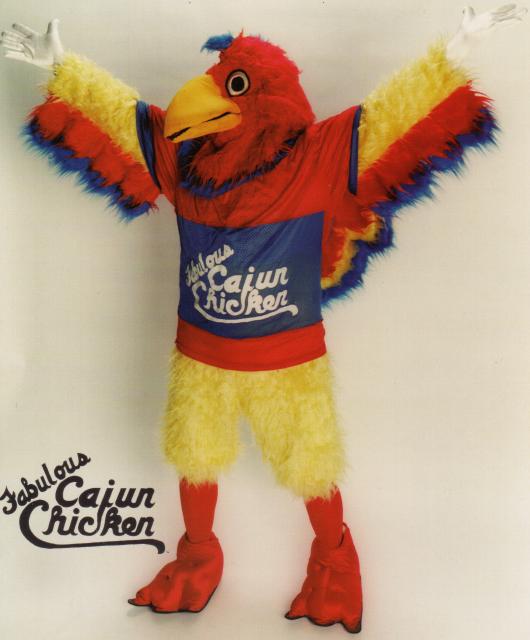 Cajun Chicken as Elvis (what, your mascot didn’t dress up like Elvis?): 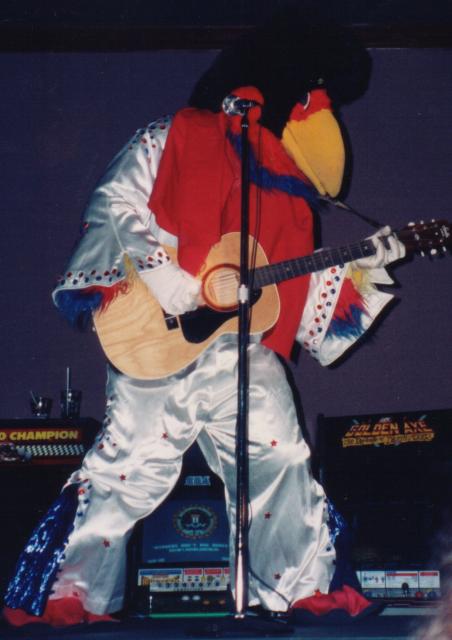 Still, the disappearance of the Cajun Man has not led to the disappearance of the controversy over the mascot, kept alive with the term “Ragin’ Cajuns.”  In Blue Collar Bayou, Jaques Henry and Carl Bankston III report that in 1997 Louis Farrakhan protested that the state funding of the University of Louisiana at Lafayette amounted to the state using “African American and Creole tax dollars… to promote a white culture.”

Consider the Ragin’ Cajun controversy in light of the other mascots we’ve covered: the Orientals, the Gauchos, the Jews, the Fighting Irish, and the Indians.

Wait, Cajun culture is considered a "white" culture in Louisiana? Shows what I know! I guess I didn't know to differentiate between Cajun and Creole?

I've looked it up, and in general terms, it seems that Creole refers to the original inhabitants of southern Louisiana. This mostly refers to wealthy French, Spanish, and Portuguese plantation owners and their African and West Indian slaves. It also refers to a whole host of other influences, including German, Chinese, and Native American. I think I could be here all day if I tried to write a comprehensive list.

Acadians were French farmers who settled in what is now Canada. Their culture developed with a mix of French, English, Irish, Scottish, Spanish and Native American influences. When their land was passed from French to British hands, they relocated to Lousiana and arrived as poor laborers. Farming didn't work out, so a lot of them worked in the docks, and there was a lot of cultural tension between the French Creoles and the French Arcadians.

Cajun refers to Lousiana natives who descend from Acadians. I get the impression that most Cajuns probably have both Creole and Acadian heritage, but they are defined by their Acadian ancestry.

tl;dr = Acadian is a mostly "white" French/British ethnic identity, and therefore Cajuns are compartively whiter than Creoles. The creole identity is likely to have a stronger African/West Indian/Spanish component.

(I didn't previously know anything about this. If I am mistaken, please let me know).

For others who wish to educate themselves, I found these links helpful:

...so using a white ethnic mascot is bad because you're "promoting white culture", but using an ethnicity of another race is insulting theirs? So which is it?

If "Cajun" is a supposed to be a white ethnicity, why is the Cajun Man so brown?

Why did they get rid of the chicken? He was neat. Way better than the other two.

Following with what Sabriel said earlier, I never saw "Cajun" as referring to a non-white or mixed-ethnicity group.

As a Canadian Acadian, I have to say that most of what we hear about Louisiana Cajuns over here is about our common heritage, and the historical events that led to the geographical division between the Acadians (those that managed to stay in Canada, or to come back, after the 1755 events) and the Cajuns (those that stayed in Louisiana after the dispersion)*

Since Acadians are technically white, since they descended from French europeans, (with maybe a negligeable dash of Native American) I always assumed that Cajuns were also "white".

Also, because of the cultural and historical context around here, much emphasis is put on the French language and ancestry in Acadian classrooms (because, as a minority culture, it is the main differentiation factor from the rest of the English-speaking Canadians), the same emphasis is put on the Cajuns, considered over here as "cousins", whenever Acadian kids learn about them in class.

I don't know about the cultural implications of the skin colour of the Cajuns elsewhere, nor do I know what the Cajuns consider themselves to be.

However, I can say that as Acadia stands right now, learning about Cajuns as anything other than those-french-americans-descended-from-us does not fit in the curriculum.

Which I think, in itself, is quite interesting.

*side-note to Sabriel's post: the Acadians did not simply "relocate" to Louisiana after their land changed hands. They were captured, imprisoned, robbed of their goods and deported to various areas of british-controlled territory after the british stole their farms, crops and livestock in 1755. Half of the Acadian population was killed, but some still managed to flee, many landing in Louisiana. This is known as "The Great Upheaval", and is still a painful memory for many Acadians. http://en.wikipedia.org/wiki/The_Great_Upheaval

* I just re-read the article, and realise that I had misread it, thinking it said quite the opposite of what it actually says...

I guess my post isn't as relevant now lol

If you're collecting sports teams with names like these, here's the Cheltenham Saracens: http://www.cheltenhamsaracens.com/

Dammed if you do, damned if you don't, I suppose. Being not-from-the-area, to me 'cajun' has a regional connotation despite it also being an ethnic term (which I vaguely recall, thanks to commenters who gave some background).

According to the history given, it's not like the Acadians are some sort of privileged people, they've been crapped on by history, so if they're not complaining, I personally don't have a problem with it. It's not nearly as bad as the other mascots listed.

My mothers side of the family is Cajun . They are not just French, they also have Choctaw blood and you can see this in their appearance. Some Cajuns due to their looks went through racism back in the day like my grandmother having to drink from segregated water fountains in Mississippi. She was called every racial slur under the books she speaks Cajun French quite well too .

Yes Cajuns were crapped on and forced to give up their way of life forced to go to schools and only speak English and were mocked if they spoke Cajun french. I also have read that some Cajuns were treated poorly because of their relationships with blacks and Indians back then there is a lot of reading about Cajun history all you have to do is google it .

There are white french Cajuns, black Cajuns and Indian Cajuns. This all right here makes Cajuns a unique breed of people. Creole's are also a very unique beautiful breed of people and am proud to come from such a heritage of mixed Cajun blood.

[...] 87. LOUISIANA-LAFAYETTE. The Ragin’ Cajuns’ central mascot is Cayenne, literally an anthropomorphic chili pepper in shoulder pads, comparison by students in 2001 to “embody a Ragin’ Cajun suggestion of Acadiana.” And nonetheless somehow, even among among problematic Ragin’ Cajun mascots, he comes in a apart second to a Fabulous Cajun Chicken. [...]

[...] 87. LOUISIANA-LAFAYETTE. The Ragin’ Cajuns’ central mascot is Cayenne, literally an anthropomorphic chili pepper in shoulder pads, comparison by students in 2001 to “embody a Ragin’ Cajun suggestion of Acadiana.” And nonetheless somehow, even among among problematic Ragin’ Cajun mascots, he comes in a apart second to a Fabulous Cajun Chicken. [...]