Emily K. sent me a link to this story about a soccer team in Amsterdam, Ajax, known as the Jews. According to this New York Times article, the team got the nickname from opposing teams, who began calling the club the Jews because of the supposed history of Jews on the team. There isn’t any particular connection between the Jewish community and the team today–the team doesn’t have a large number of Jewish players, nor is the fan club made up of a higher number of Jews than other soccer teams.

This leads to some interesting situations. Most notably, fans (the vast majority of whom are non-Jewish) have adopted symbols of Judaism and Israel to show team spirit. Here’s a fan wrapped up in an Israeli flag: 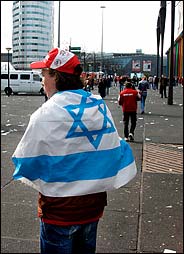 And this fan has tattooed the Ajax logo along with a Star of David on his arm: 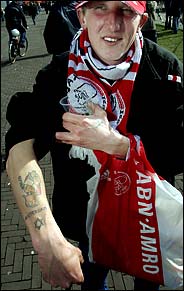 (Both images from the NYT article.) 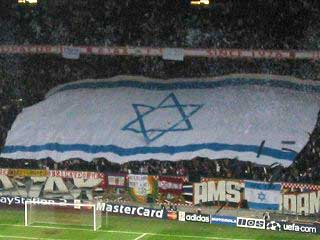 This brings up some interesting issues about the appropriation of cultural symbols. When I first saw the pictures, I thought it was a bit disturbing that people use the Israeli flag as a prop to express support for an athletic team. But then I remembered that people do this all the time–I’ve seen pictures of soccer fans wrapped up in, for example, the Spanish flag, or wearing shirts with pictures of flags on them (not to mention people wearing clothing with American flags). Of course, that is often by people who are citizens of those countries. So is it weird to have non-Israelis using the Israeli flag in this way? I’ve thought about it, and I think maybe the strong association between Israel and Judaism makes this seem a little different than those other examples, since it then appears to be the appropriation of a religious symbol, even though the Israeli flag is not, technically speaking, itself a religious item (as opposed to, say, if fans were wearing yarmulkes or something). And clearly the people using the flag in this way are doing so because of its association with Jewishness, not because they have any particular interest in Israel or like an Israeli team.

The other problem that arises is opposing fans’ heckling. Because Ajax is nicknamed the Jews, fans of other teams often use anti-Semitic chants during games. Some examples (found at the Ajax USA site):

There is the Ajax train to Auschwitz!

According to the NYT article, they have also yelled “Hamas! Hamas!”, a reference to the Palestinian political party. And there’s this, from Ajax fans themselves:

…during a game against a German team late last year, a group of Ajax supporters displayed a banner that read “Jews take revenge for ’40-’45,” a reference to the Holocaust.

Some Jewish fans now report that they have stopped attending games because they find the behavior offensive.

This would be a great example to use in a discussion of sports mascots, particularly how it compares to American Indian mascots (for examples, see this post) and Notre Dame’s Fighting Irish mascot (see post here). Critics of American Indian mascots often ask questions along the lines of “What would happen if a team called itself the Fighting Jews?” (see here and here for examples of this rhetorical strategy), but it’s always presented as an unimaginable, completely hypothetical situation. And yet it turns out not to be so hypothetical after all. My guess is students would generally have a much more negative reaction to the Ajax Jews than to teams like the Washington Redskins, and it would be useful to discuss why that might be (keeping in mind that fans of teams playing against teams with Indian mascots sometimes use images that depict violence against Indians).

And of course there’s also the whole issue of the appropriation of Jewish culture and the trivialization of the Holocaust and Nazism by both Ajax and opposing fans. The whole thing is creepy.

"I’ve seen pictures of soccer fans wrapped up in, for example, the Spanish flag"

There is unfortunately a surplus of neonazis and fascists in soccer fandom. If the flag had an eagle behind the heraldic shield (the official Spanish flag during Franco's regime), they definitely were fascists.

Interestingly, if you ever find a Confederate flag in a music gig or a soccer stadium in Spain, odds are they aren't racists or anything like that -- they're most likely rockabillies. They abstracted the "Rebel" name from the flag and adapted it for their subculture.

Actually, friends of mine who visited Germany and went to an Ajax match saw fans showing their support in other ways, such as wearing yarmulkes and even writing strings of numbers on their arms... talk about creepy.

I showed my bubbe this and she was completely enraged. It's amazing what will happen in another country but not here. In the United States we have the Redskins but we would never have The Kikes.

Interesting. A note on people wearing countries' flags not their own when supporting sports teams: in Scotland you still see football fans wearing Argentinian colours. I think this relates to two things: the Falklands War, and the infamous Hand of God goal scored by Argentinian player Maradona, knocking England out of the 1986 World Cup. I mean many Scots will generally support anyone who is playing against England, but the Argentinian thing has an added bite.

The most interesting appropriation is that of the swastika. Most people don't even know it has meanings aside from Nazi ones.
http://en.wikipedia.org/wiki/Swastika,_Ontario
An ignorant person may be offended by a Buddhist with a swastika as happened to a Vietnamese professor I had. Context is everything.

I doubt the soccer fans feel they are trivializing the Holocaust, to them it is more like the trivial sport of soccer means so much to them that it is as important. The use of Holocaust imagery isn't meant to denigrate the Holocaust, but to make the soccer match seem like an epic rivalry, far more engaging than the Amsterdam Tulips v. the Hague Windmills.

Speaking as a Dutch person who doesn't approve...

What's odd about it is the disconnect the fans form. My brother is an Ajax fan - not hard-core, but they're his favorite team. A while ago, someone had written something like "Jews suck" on the walls in our building. I mentioned that to him, and that I found it offensive and not only did he immediately conclude it was a comment about Ajax rather than actual Jews, he completely failed to see how I could find it offensive.

Mimicking Judaism or Jews by getting tattooed is completely bizarre. See http://www.hillel.org/about/news/2007/jan/tattoos_19Jan07.htm for more on the subject.

I'm literally open-mouthed at the chants the opposing teams use. I think that to talk about possible appropriation issues is a serious diversion.

It seems to me that's potentially problematic, but to have fans from other teams happily chanting away about the Holocaust and being outright anti-Semitic is horrifying.

that's awesome, I didn't know that about Ajax.
yea, I think it's just, maybe it's harmless, but it's not necessary to do this kind of thing. Judaism is always exceptional, because anti-semitism is so incredibly widespread that jokes about jews and the holocaust are so often the ones people laugh most histerically at, I noticed this most evidently while at a movie theater recently, watching Bruno, when people sometimes did not laugh at some of the more edgy gay jokes, because the image that came up in their heads was just so uncomfortable to them, but people are generally exceptionally comfortable with jewish jokes and really unleash the laughter with total abandon, probably even taking pleasure in seeing the images in the heads. I think that's why crowds of thousands are capable of chanting so trivially at Ajax games, because anti-semitism is pretty much the norm, and really I believe they feel an unconscious joy in making the hissing sound of gas. It's horrible but I'm convinced that that's the truth.
But anyway, in less extreme cases (ones not revolving around genocide), while it may be fairly harmless, it's just not ideal, because among the thousands there will be tens that will have their feelings hurt and should not be forced to repress them, I don't feel sorry for the fans that don't go to Ajax games because of this as much as I do for the ones that suck it up and go anyway.

[...] recently read an article on Sociological Images about the identification of Amsterdam’s AFC Ajax with Judais..., apparently because in the past they had many Jews playing on the team, and the fans appropriated [...]

[...] Cajun controversy in light of the other mascots we’ve covered: the Orientals, the Gauchos, the Jews, the Fighting Irish, and the Indians. Leave a Comment Tags: education, objectification, [...]

I also find the wholesale acceptance of the equivalence of Israel and Jewishness disturbing. This is another PR victory for ethnocracy and ethnic cleansing, and an insult to Judaism.

The reason for the Jewish symbols and connection is that during WWII Amsterdam was seen as a safe Haven for Jews in Europe and our city sheltered them throughout the war. While many other parts of our country viewed this in a negative light, we were proud of this and still are.

Can I simply say what a relief to find somebody who actually knows what theyre speaking about on the internet. You definitely know methods to carry a problem to gentle and make it important. Extra people need to read this and understand this aspect of the story. I cant consider youre no more well-liked since you definitely have the gift.

QuickBooks web connector application used to enable qbXML and qbposXML. if you are getting Quickbooks Web Connector Error QBWC1085 then it might be because of the log files in your Quickbooks.