A couple of weeks ago I posted about American Indian sports mascots. An interesting comparison to spark discussion, and an example students often bring up, is the University of Notre Dame’s mascot. The name of the Notre Dame athletic teams is the Fighting Irish, and the official mascot is the leprechaun (image found at Wikipedia): 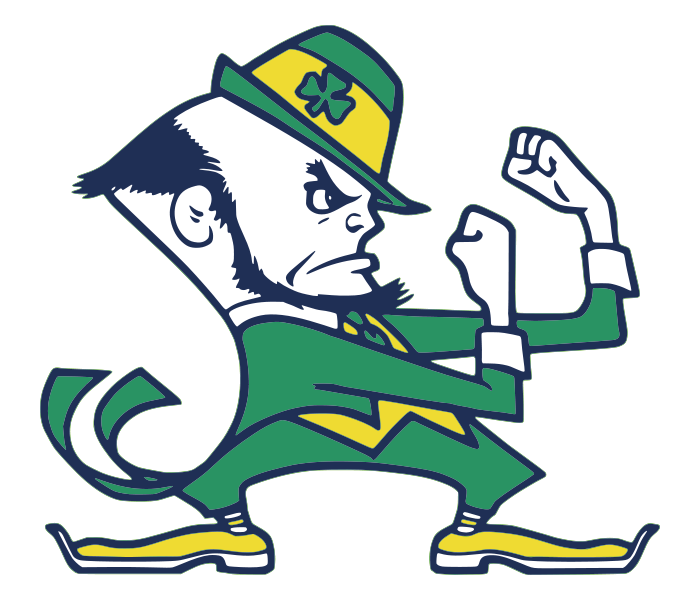 Each year a student is chosen to be the leprechaun. Here is an image (found here) of the Notre Dame leprechaun performing at a game:

According to the Notre Dame website, the leprechaun did not become the official mascot until 1965; before that, the university was represented by Irish terrier dogs.

This might be useful not just for a discussion of sports mascots, but more generally for a discussion of the idea of equivalency in discrimination. I see this a lot with students–if, for instance, we’re discussing sexual harassment and they can point to an example when a man was sexually harassed by a woman, then they argue that men are affected just like women, and thus it has nothing to do with gender inequality or power. I suspect those who bring up Notre Dame in an effort to invalidate arguments against Indian mascots are doing the same thing–if a White ethnic mascot exists, then charges that Indian mascots are racist can be dismissed. It’s a false form of equalizing because it ignores the lop-sidedness of the “equality” (the tiny number of non-Indian racialized mascots compared to the number of Indian ones) and the role of systemic inequality (that American Indians are underrepresented at colleges and universities and face racial discrimination in a way that Irish-Americans do not). And it also serves to discount opponents’ voices by saying that if any social group wouldn’t be opposed to a particular type of portrayal or treatment, then no one else has any right to be offended by it, either, regardless of their different histories, treatment, or social positions.

Another point to bring up is that while many of the Notre Dame students are of Irish descent, not many of the players on the Redskins are Native Americans. Thus you could easily make the argument that even though the Fighting Irish mascot is a bit racist, at least many of the people who came up with it and who are represented by it are of Irish descent... therefore, it's like making fun of yourself. Just like it's okay to call yourself fat but not someone else, it's more okay to apply a racial stereotype to your race than it is to apply one to a race that no one in your group actually is.

The point of bring up the Fighting Irish in this debate is that those against Native American mascots have a tendency to suggest that such mascots are insulting on their face. The existence of even a single well received "ethnic" mascot - like the one at ND - belies this argument. If Native Americans wish to feel insulted by the mascots, that is a decision they make, but it is not an obvious or necessary one.
As I said in the original posting on this, they should just change the names of these mascots to The Fighting Homesteaders or The Fighting Pioneers and be done with it.

~"Does the existence of the Fighting Irish invalidate opposition to American Indian mascots?"~

No, not at all. The Irish have not faced racial discrimination in the US for generations. And yes, the Irish were considered a different race but things have changed radically. In any case, it does not even compare to the genocide Native American tribes faced by colonial and later American governmental powers. There is still discrimination and poverty on top of it all. Not every NA agrees on the mascot issue but I think we should respect those who take issue. In one instance at least in Florida State Uni, the school asked permission of the Seminoles to use the name and image some years ago and have been in partnership with them offering scholarships and programs, working with the tribe.

The Irish have been very good at embracing stereotypes and slurs and turning them matters of pride. That has been a luxury afforded more by white privilege than by anything magically delicious, lol. I'm not wild about Leprechaun stuff in general but Notre Dame gets a pass.

Mmmm. If you try to imagine this happening in a place where the Irish have traditionally been discriminated against, I think it would indeed come over as racist.

While there are sports teams in mainland Great Britain which draw on an Irish heritage (Celtic, or Hibernian, which are Scottish football teams, or London Irish rugby) they are all very neutrally named. All the teams I've mentioned were originally formed with players who were Irish or of Irish descent, and though this is far from true now, Celtic in particular has been associated even fairly recently with the sectarian struggle in Northern Ireland (though the club has tried hard to dissociate itself, as has its rival Rangers).

I'm pretty sure that if anyone tried to associate violent behaviour with any of these clubs' names (even if it's meant in the sense of "fighting to win") it would be considered a public relations disaster. Rugby fans have never had a reputation for hooliganism*, and Scottish football fans never had the fearsome reputation of English fans, but there has been violence between Rangers and Celtic fans, and it's something the teams are keen to get away from. So would they ever choose a mascot in an aggressive stance with fists up? No.

Harry Potter notwithstanding, folksy leprechaun stuff isn't very popular in Britain, anyway (Lucky Charms cereal was launched here with some fanfare in the 90s, but failed to sell and is now only available as an expensive import...) I don't think this is down to discomfort about our shared history; Guinness keeps selling when other beers decline, and we have Irish pubs.

*Which is, of course, a word coined to describe the behaviour of Irish gangs in the nineteenth century.

Mock me will ya? Wait'll I get me shillelagh and give you what's for ye yank ya.

[...] Indian mascots (for examples, see this post) and Notre Dame’s Fighting Irish mascot (see post here). Critics of American Indian mascots often ask questions along the lines of “What would [...]

[...] what about the Fighting Irish? Why are Irish-Americans not protesting Notre Dame’s image of a hostile leprechaun? It might [...]

Reminds me of the Fightin' Whities.

When Chief Illiniwek is dancing around on the field, banging a drum and attempting a spiritual style dance, it is a direct patronization of the Illini culture and spiritual religion.

Chief Illiniwek IS representative of the Illini.

I wish their mascot was still a dog! Or at least had red hair. Come on! If you're going to get stereotypical, you have to go all the way. BTW, I'm of Irish descent and while I HATE the seldomly encountered but still popular notion that redheads have hot tempers, and while I know that Irish people are stereotyped as drunken pants-poopers, I don't really mind the mascot. Although a terrier in the same fighting stance would be so much better!

You idiots. The "Fighting Irish" were a squad of Irish WWI soldiers known for their ferocity in battle.

What about Harry Husker of the Nebraska Cornhuskers?  He's a blonde, white farm guy in overalls.  He's the team mascot and is at every game.

To DAD. Their mascot is not a "Doughboy" and Notre Dame university does not acknowledge any official connection to this group. The idiot here is not the infamous "them"   but "you" sir.

Many people don't know this, but the majority (53%) of victims of sexual aussult in the US military are, in fact, men. You would never know this based on the public discourse on the issue. Likewise, the vast, v-a-s-t, majority of victims of crime in the US are white people (European-Americans). Again , one would never imagine that based on the discourse in the media and among ethnic-studies academic hacks like the author of this poorly written article.
Food for thought.

What about Providence Friars? I don't see Catholics upset about monks dancing on the sideline.

I don't see people in West Virginia getting upset over the portrayal of Mountain Men.

There are LOTS of other examples. It is not just Notre Dame and the Irish. Using a Native American mascot is not the same as blackface. This a false equivalency. In fact, the most problematic of Native American mascots is the Redskin who does not typify sterotypes, but shows a regal and majestic chief (even though the team name does need to change as it is insensitive).

What about the Edinboro Fighting Scotts?

What about Wesleyan Battling Bishops?

I am bored of listing college mascots, but the point is many of these "White" mascots have real relations to the people of the region they represent and in each case, are a source of pride instead of a perceived source of ridicule.