The images below are aerial shots of a development in California City, a city about 100 miles northeast of L.A. The development was abandoned before being built, leaving a grid of empty streets now visible on Google maps: 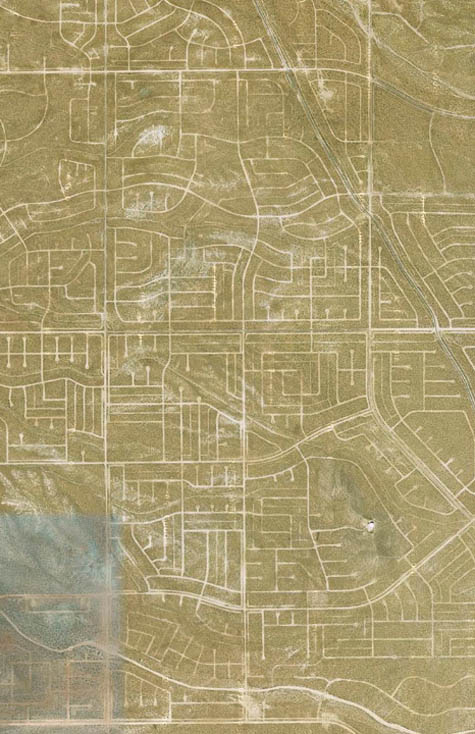 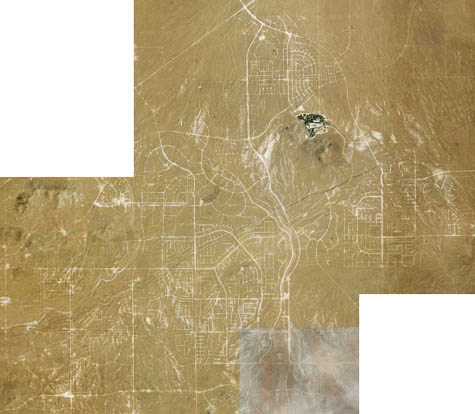 California City was planned in the late 1950s and early 1960s when L.A. was experiencing a major boom and houses were increasingly being built in large, pre-planned developments by a single construction firm. Instead of building houses as people requested them, the new business model was to buy a large section of property, build a lot of houses in more of an assembly-line fashion, and then find buyers for them and, with the post-World War II economic boom and subsequent suburban flight, it worked.

But as these maps testify, sometimes things go awry; a particular city doesn’t grow as much as the developers thought (California City was supposed to rival L.A. in size), or an economic downturn affects the real estate market in a more widespread manner (see the comments for several readers’ summaries of the many factors that have at times played into real estate booms and busts, including policy decisions in both the public and private sectors). And with the planned development housing model, we may be left not with a few unsold houses, but with bizarre ghost towns in varying stages of completion as evidence.

Related posts: the dilemma of the duplex, Michigan and the recession, and economic change hits the mall.

I think there is more to it than simply something going "awry." People do make mistakes and since people do very big things they will sometimes make very big mistakes, but this mistake and other examples you cite take place within a business environment that systematically encourages mistakes of this nature, via the artificially low interest rate, among other things. The interest rate, like all prices, contains a lot of important information that is lost when it is tampered with. Specifically, the interest rate encapsulates the preference for present verses future consumption. By making it artificially low, the signal is sent to invest in longer-term capital projects than the economy actually has demand for, resulting in unsold, incomplete, and ultimately wasted investments as shown above.

Besides promoting mistakes, the system also greatly encourages excessive risk taking in the first place, by such things as the corporation. But, since listing all the ways that the American economy is rigged to promote excessive risk taking and malinvestment would not be a comment, but a thesis, I'd stop here.

I note that the "grid" of streets shown in the photo above is not really a "grid" per se, but more like a typical suburban subdivision with lots of dead ends, cul-de-sacs, and arbitrary street placement. This is in many ways the opposite of an urban grid, whose logical layout enables an individual to have an intuitive sense of their own location in relationship to other points on the grid.

The suburban layout exemplified here lacks this characteristic, and thus brings about disorientation and isolation.

What strikes me about it is that it looks like an awful design. With all the dead end roads, it'd be almost unnavigable, prone to congestion, and a problem for emergency services.

Like Las Vegas, it seems to be a desert. Regardless of the economic crisis, the population of desert cities should eventually contract. There's not enough water out there to be sustainable.

What will future archaeologists make of this if the written record does not survive? It's just so fascinating to look at.

UrbanPhoto had a good piece on this recently, comparing California City to the mostly-unbuilt Lehigh Acres in Florida, now a "ghost suburb". As AR says above, these are the results of policy decisions; AR mentions interest rates. I would also mention tax law, which at various times in the past has encouraged speculative real estate investments leading to overbuilding. But we should also keep in mind something suggested by Gwen above when she said California City was to rival LA in size: much of this is also driven by American hucksterism.

I could be wrong, but those roads don't really look paved. I'm surprised they're still there, considering this is all from this 50's/60's.

How come when I pull up "California City" on google maps it looks inhabited and even has a community college? This doesn't look like a ghost town. I live in the mid-west with plenty of ghost towns in rural areas and abandon farm towns but the big cities urban areas are becoming full of suburbanites as they are finding dirt cheap properties attractive in comparision to their over-priced living on the out-skirts of town. Some like to call this "urban renewal" or "urban revitalization" but it's more fiting to call it "gentrification" as it displaces the poor and often makes providing services to the marginalized even more difficult.

I agree with Beelzebub - they don't look paved, can I ask what these roads are? Are they simply dead grass or what?

[...] Next on our travel itinerary: California City, which is as close to a ghost town as you’re ever going to see. [...]

It's particularly eerie that all the streets are named:

With so many people leaving California now, CC may eventually rival LA after all.