The desperate economic situation of Detroit, Michigan is in the headlines these days.  From the New York Times:

In one sign of distress, in the first nine months of this year [2008], some 130,000 Michigan residents who had lost their jobs remained out of work so long that they ran out of regular unemployment benefits. By the middle of this month, 63,000 people (who had already run out of their ordinary maximum benefit — as many as 26 weeks, at as much as $362 a week) also ran out of an extension authorized by Congress.

This figure shows the unemployment and forclosure rate in Michigan as of Oct. 2008.  It shows that Michigan in general, and Detroit especially, is doing much worse than the national average:

Today’s numbers reflect not just the current recession, but 30 years of decline.  A figure from Spiegel reveals that the marketshare of U.S. automakers have been steadily dwindling:

Spiegel reports that the city has lost more than half its inhabitants since the 1950s (from close to 2 million, to 917,000 in 2009).  The tax base has plummeted and city services, in turn, have been cut.

The conditions in Detroit are dire, and they contrast greatly with the city in the late 1800s and early 1900s.  Then, Detroit’s shipping and manufacturing economy, innovative for its time, made it a rich and vibrant city.  Today, the ruins of that vibrancy still occupy the city. 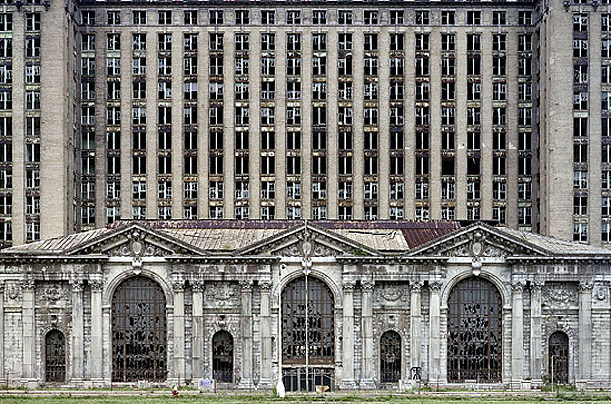 Constructed in 1893 in the once-elegant Brush Park neighborhood, this home, designed by architect Albert Kahn, was moved from its original location several years ago by preservationists who hoped to preserve it. It was demolished last year: 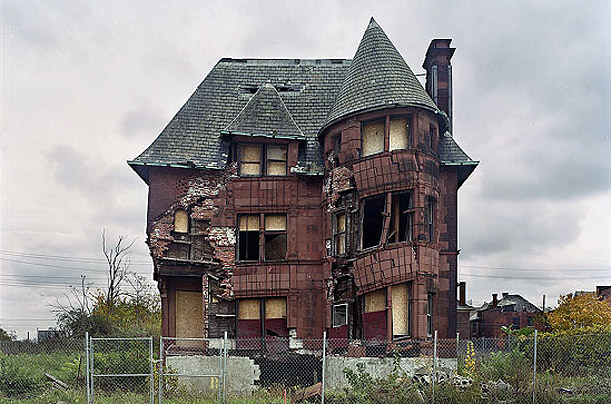 Many of the city’s Catholic schools have been closed, though the churches they are affiliated with remain active: 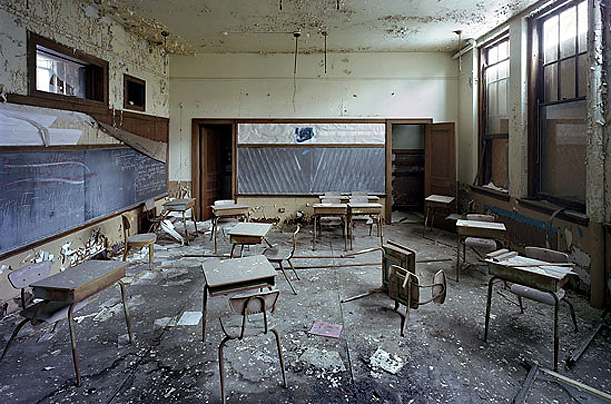 One of the city’s most prominent skyscrapers, this 35-story tower once housed the offices of many doctors, lawyers and dentists. It has been virtually empty since the 1980s. Developers hope to convert the building to residential units by 2010: 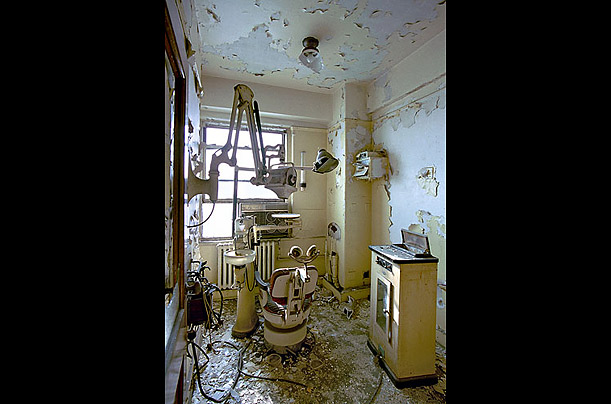 This spectacular Spanish Gothic theater, built in 1928, was closed in the 1970s: 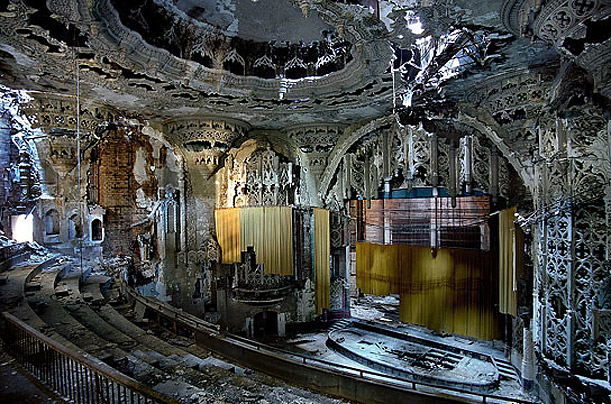 Once one of the most luxurious residential hotels in Detroit, Lee Plaza closed in the 1990s: 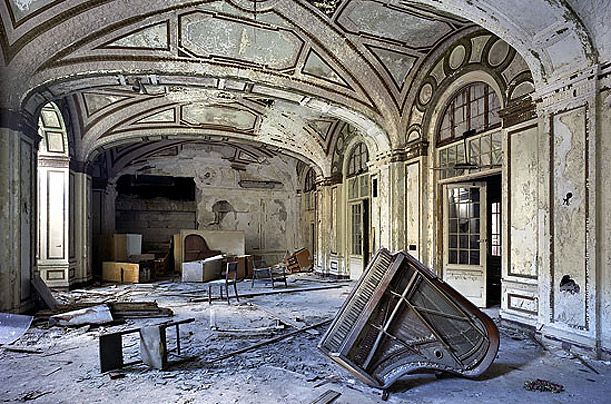 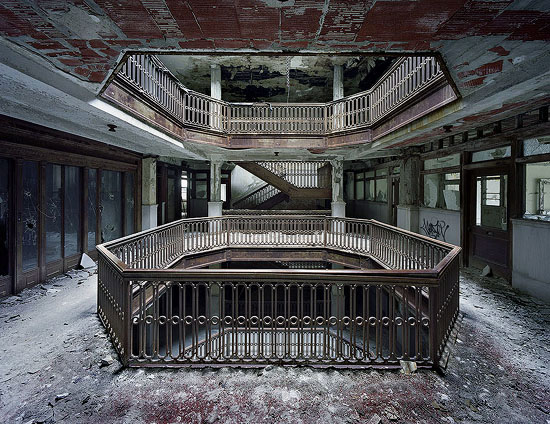 Photographers Yves Marchand and Romain Meffre write: Detroit’s “splendid decaying monuments are, no less than the Pyramids of Egypt, the Coliseum of Rome, or the Acropolis in Athens, remnants of the passing of a great civilization.”

Damn, this is depressing. I'd be interested to see the suicide rate for Detroit (and the rest of Michigan, too, actually) and compare that to national averages.

Here's another haunting photo essay about an abandoned school in Detroit--read to the end...
http://www.sweet-juniper.com/2008/10/open-campus.html

State by state suicide rates here: http://www.nmha.org/go/state-ranking. Michigan 15th best, just about the same as the national average. Could not quickly find city suicide rates, but Detroit does not make the top 5: http://www.citymayors.com/features/us_stresscities.html

The pics were interesting!

As a Michigan native, this is truly heartbreaking. Even worse is seeing how many people in other parts of the country are saying that we deserve this and that we should be left to hang. I know the Big 3 automakers have certainly made mistakes. But when other parts of the country are having economic problems, I don't say that it is their own fault or gloat about the fact that their economy is collapsing.

I'm wondering if, instead of trying to run a state here, we shouldn't just get the money we can to 1) give people enough money to move somewhere with jobs, 2) knock down all the stuff we've built and 3) set up the whole place as a national park...

Will, I'm just one person in another part of the country but for what it's worth, I don't want to see the automakers fail simply because of the people who work for them. I hope things turn around soon for you guys there.

Sad photos. I've lived just outside of Detroit for my whole life. Parts of the city have improved dramatically, and others...well, the photos are up there for everyone to see. Meanwhile, the local politicians are engaged in so much in-fighting that not much gets done, and the rest of the country would be happy to cut off our state at the Ohio/Indiana border and let Canada have us.

I'm not surprised at the lower than expected suicide rates. We're stubborn and tough up here. At least once a generation things get ugly, and we don't have the boom times that other states have had. We're used to it on some deep level. It's kind of depressing to think about it that way, but it's our survival mechanism.

Thank you for letting Michigan's plight be more widely known.
Frighteningly, the unemployment numbers have continued to rise, with most of the state in the 12-16% range, and places like Detroit reporting 22%.

It's a tough time, and we have a long way to go.

It's a tough state to live in, but god damn it's beautiful.

One thing to notice is the quality of the building. The effort that went into making the buildings beautiful is remarkable- and is rare in public architecture today. The buildings and houses being built today are not being made to last. Of course, what does it matter if a building is made to last, when the culture that created it cannot.

I feel bad for what is going on in Michigan, but the civilization that created such an impressive city can't go on forever because this earth simply couldn't take it. Whatever replaces cars, I hope the people of Michigan can benefit in some way from it. I hope we all can.

These are gut wrenching. The pictures of the Lee Plaza are the most striking. All that deterioration in the course of 10 to 15 years? If someone showed me that picture and asked me how long that place had been abandoned I'd have guessed since the 70s. I feel so bad for those people in Michigan.

I love old architecture. The Spanish Gothic theatre is breathtaking.

Detroit != Michigan just like Chicago != Illinois, firstly. Secondly, feeling pity for those of us in michigan isn't going to help us get back on solid footing. Please, do something more concrete. And if you live here in michigan, invest more in the city, and not in the "Metro" area. The metro area is sucking the life out of the city. Has been for 40+ years.

"Photographers Yves Marchand and Romain Meffre write: Detroit’s “splendid decaying monuments are, no less than the Pyramids of Egypt, the Coliseum of Rome, or the Acropolis in Athens, remnants of the passing of a great civilization.”

Unfortunately, they are substantially less splendid as ruins and will ultimately have to be razed. Almost none of our modern architecture will end up being ruins on par with those listed. It's because of the expansion coefficient of the cheap building materials we use plus the eventual rusting of the steel reinforcement in concrete. The Coliseum will still be standing long after all our modern buildings and infrastructure has turned to dust.

And I guess by "great" they really mean large. I'd prefer not sugar-coating they ways by which these civilizations became so powerful just because they're really really old...

[...] Is Gone There’s some amazing images of the grand decaying relics of Detroit here, at Sociological Images.  They also have, like, intelligent graphs and commentary, but I’m [...]

[...] ships are another visual indication of the worldwide economic downturn, alongside the images of Detroit’s decline, unsold cars, abandoned homes, and empty malls. Leave a Comment Tags: economics, [...]

[...] map of job loss by region, the dilemma of the duplex, not everyone knows there’s a recession, Detroit’s decline, job losses, gender and recession, and tips to the rich on how to be discreet during a recession. [...]

[...] posts: the dilemma of the duplex, Michigan and the recession, and economic change hits the mall. 8 Comments Tags: consumption, history, rural/urban [...]