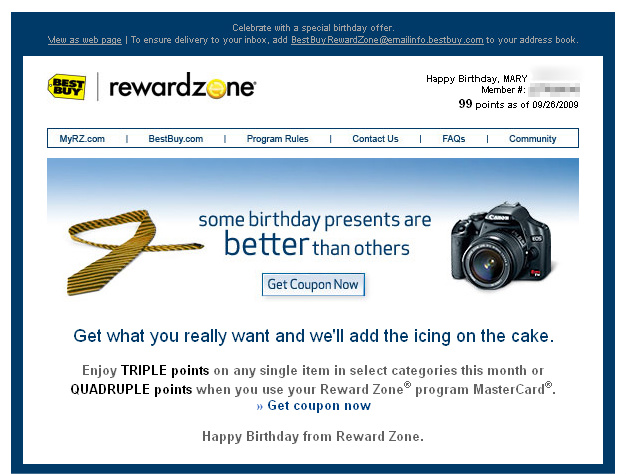 Given how carefully ads are now targeted to internet users (based both on the demographics it can gather about you [e.g., when you’re on Facebook] and the content of the text you’re reading [e.g., alongside email exchanges]), it’s kind of fascinating that Best Buy is apparently NOT paying attention to Mary’s sex.  This, of course, might be heartily welcomed by many of you.

But, if Best Buy is going to put together a non-sex-specific promotion, it sure seems like it would be a good idea to make it non-sex-specific (featuring, as a bad gift, something non-gendered like an electric toothbrush or something).  For whatever reason, Best Buy went with “we’re going to assume that all our customers are dudes.”

For more instances of male as the default human, see these posts: one, two, three, and four.

Maybe they DID note that Mary is a women and that is why the tie is a terrible idea. Why shouldn't she want a camera?

it’s kind of fascinating that Best Buy is apparently NOT paying attention to Mary’s sex. This, of course, might be heartily welcomed by many of you.

It is, given in the world of Facebook ads, I've noticed you're either a man or a mom. Sometimes, there are more general "female" ads, but I'm usually overwhelmed by ads supposedly targeted to moms.

As a woman, frankly, both would be good gifts.

If you would like to gift either please sent to....

How is a tie inappropriate for women? Does Mary live in the Sudan?

You're assuming Best Buy knows she's a woman. Unless they're going to ask gender, or guess gender based on name (which as a male Kelly would piss me off), they're going to have to have a generic ad. Also, the ad doesn't say anything about a tie or camera being good or bad gifts for Mary, it just says some gifts are better than others. I think most of us, male or female, can realize a camera is a better gift than a tie. Sure, a non-gendered item would have been nice, and I'm sure I'm just biased because I'm male, but I don't see what the big deal is about this.

Well, wouldn't the tie be a really bad gift for Mary since she can't wear it (unless she wants to look like Avril Lavigne way back when) but the camera a really cool gift because it's just plain AWESOME?

In short, I find nothing wrong with this.

After having worked at Best Buy, I can tell you that they are keenly aware of their demographics, but that doesn't keep them from issuing forth a veritable tsunami of racist and sexist advertisements (not to mention, those that are simply insulting or in incredibly bad taste). In the store where I worked, it was all pink and pretty for Mother's Day. You should also look up next time you walk into one of their stores. In Best Buy Land, blacks only marry blacks, whites marry whites, and Hispanics marry Hispanics. It's just the way the world should be. Not sure if you'll ever get this chance, but if you're ever in there, look for the Spanish-language version of their Geek Squad install brochures. If you're wondering what's in there, just know that the picture of the guy with cornrows unloading the Precinct van does not and will not ever show up in the English-language version that everyone. We just don't want that guy in our house (or so BB marketing tells us.)

So no, I don't excuse them for this one, either.

"I think most of us, male or female, can realize a camera is a better gift than a tie."

This is very true, and certainly is the point of the ad. BUT... I am the Mary from the email, and what I took offense to is the obvious gender-specific "bad" gift. Generally speaking (just as you are!), people do not give most women the universally generic man-gift that is a tie. I am not questioning that the tie is worse than the camera, that's the given. If I were creating this ad, however, I would think to myself, "hmm, what's a crappy generic gift?" And as a female, I would put a scented candle or a picture frame. But Best Buy -- selling universally appealing man-gifts -- chooses a tie because they think more of their readers can relate to it. It's sexism, and working in a technology-based field I encounter it daily.

Don't buy it? When was the last time you saw 55" 1080p full-HD LCD TVs being pushed during the Best Buy MOTHER'S Day ad flyer?

If they had shown something pink and/or "girly" there would be complaints about that.

The tie is questionable, but the camera (the item that they're actually pushing) is not! The tone of this post implied that the camera is a gender inappropriate gift.

A tie is a generic "bad gift" and fits with the promotion. They could have used socks, sure, or an ugly sweater knitted by someone's grandmother, but a tie is easier to reproduce and is more widely acknowledged as a "bad gift." Even the grandmother who knits those ugly sweaters would have to agree.

Now, if you wanted to protest the mother's day gift examples of "easy to use" technology as an example of gender discrimination, have at it.

A tie is coded as a man's bad gift. Yes, a tie could make a bad gift for many people, but it's *coded* as male. We're meant to read it as such.

Best Buy's sexist marketing is infamous. I used to frequent one forum devoted to the hassles of retail work, and whenever Best Buy was mentioned, former and current employees would always bring up the sexist training they received. They're *trained* to treat women as if they're ignorant and steer them towards the lightweight entertainment items, and steer men towards the expensive gadgets. And this was not a feminist board, mind you, so the prevalence of the mention of sexism in relation to Best Buy was pretty striking.

I think this is a bit of a stretch--the necktie is what some would call iconic (in our culture) of a thoughtless, last-minute gift. One traditionally given to males, sure, but I can't think of a non-gendered gift item that has the same obvious symbolic associations.

1) I was looking for a new hard drive a few days ago, and someone greeted me when I walked in, but the rest of the 20 minutes I was there walking up and down the aisle looking for a specific hard drive, nobody spoke to me until I had to wave someone down to ring me up.

2) A few weeks ago, I was in a Best Buy with my brother looking for a case for my iPhone, and I spent 10 minutes or so looking through the phone accessories but couldn't find the ones specific for the iPhone. When nobody spoke to me or offered me help, I went to find my brother to let him know I was done shopping, and literally before I even got a sentence out, someone stopped and asked us if we needed help. I asked the guy to show me where the iPhone accessories are, and he walked me over and walked away.

3) A couple of years back, I was in a Best Buy with a friend who was genuinely looking to buy some speakers for her living room, and we couldn't flag anybody down for the life of us.

4) Eight or nine years ago, I was in a Best Buy in Norman near OU, and I was looking at the top selling CDs, and an employee asked if I needed help and when I told him I was just browsing, proceeded to point out every single African American artist on the display.

Best Buy does have a corporate culture that is racist and sexist- they're currently being sued for not promoting women and employees of color. You can read more here: http://www.bbdiscrimination.com/websys94.pl

I fail to see what is sexist about advertising a camera- I am female who loves photography, and who would be likely to follow the link to camera deals.

As a feminist, I like to pick my battles carefully, and this is not one of them.

I don't get why a tie cannot be suitable for a woman as well. This is a sociological trend that cultivates differences just by highlighting it. If BestBuy showed that as a cheese grater and sent it to a man, would that make the same effect?
As much as kitchen-woman association is a thing from the past, tie-man association seems to (unfortunately) live on.

For a blog that has a lot of articles show casing sexism in the media, shouldn't they relink back to this post in the future? Saying that one particular item of clothing and a piece of electronics is for men only, that seems rather sexist.

but... maybe the issue is that they imply that the tie would be a bad gift because she IS a woman, and only men would receive (and not enjoy the gift) or a tie...

[...] A. sent in a Zellers sale flyer that is really interesting in light of the recent post we did on a Best Buy promotion. Whereas the Best Buy promotion was aimed directly at men, you’ll see that this flyer, for a [...]

[...] non-default one. For instance, “regular” t-shirts are men’s, Best Buy assumes customers are male, stick figures on signs are generally male, and default avatars tend to be [...]

This is likely the fault of the email marketing team that sends out Best Buy's emails, NOT best buy. Big corporations pay email marketers to segment and deploy and sometimes create/design their emails. Looks like the box for Sex in their database was either M for some reason or the segment pulled was wrong. I'm just saying, if Best Buy knows about this, they are already asking for a credit or a database udpate asap.

I'm up in the air as to whether the ad is an example of "masculine is neutral", or whether the article is an example of "neutral is masculine". I'm leaning towards the former, obviously, but I can't but feel that the latter isn't *entirely* incorrect; even if a tie can be assumed to be masculine, I wouldn't see a camera as such, especially not in the context of the audience of an electronics retailer. Cameras, are, in fact, one of the electronic products I would've considered to be free of the stereotypical association with the "male gadget-geek" demographic.

I also think it's possible that there isn't really a female equivalent to the stereotypical male Bad Gifts of ties and socks; the generic female gift is perfume or bath products, which are, to a lot of people, not so much "bad" as "not particularly thoughtful". (My GF and an old school friend have an understanding that they exchange just such gifts at Christmas, something which I can't imagine anyone doing in regards to a tie.) It may simply be that our culture lacks the appropriate gender-neutral language for communicating the concept of the generic "bad gift".

[...] one. For instance, the Body Worlds exhibit, “regular” t-shirts are men’s, Best Buy assumes customers are male, stick figures on signs are generally male, and default avatars tend to be [...]

[…] one. For instance, the Body Worlds exhibit, “regular” t-shirts are men’s, Best Buy assumes customers are male, stick figures on signs are generally male, and default avatars tend to be […]