Politics, Public Discourse and the Press

Dr. Sid Bedingfield received the South Carolina Historical Society’s George C. Rogers Jr. Award for his publication Newspaper Wars: Civil Rights and White Resistance in South Carolina, 1935-1965 in March 2018. In Dr. Bedingfield’s own words, this is how that project came to be. 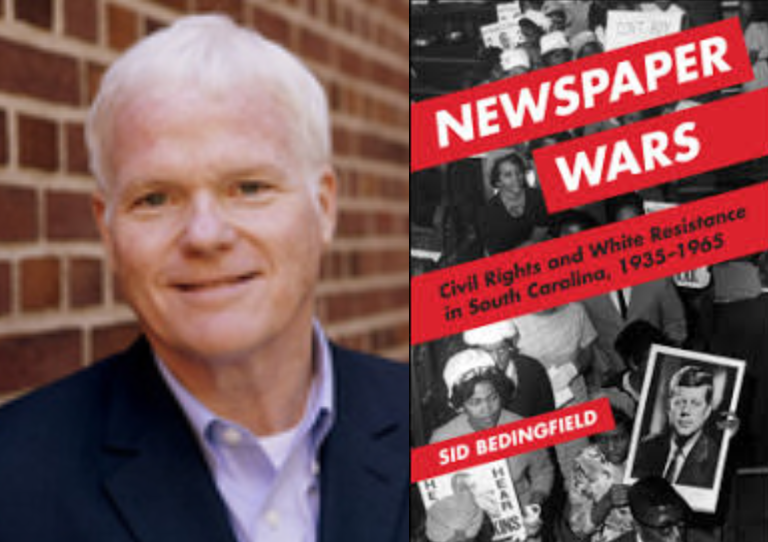 I grew up in the South during the 1960s and 70s, and I had a deep personal interest in the racial politics of the region. It made sense for me to combine my interest in political journalism and civil rights history by exploring the role journalists played in the African American freedom struggle in South Carolina. My book, Newspaper Wars: Civil Rights and White Resistance in South Carolina, 1935-1965, grew out of that research.

The book focuses on an African American civil rights movement that began in the desolate political terrain of the 1930s, won a string of victories in the 1940s, and came under fierce attack from a white segregationist counter-movement in the 1950s and 60s. Unlike most studies of political history, Newspaper Wars moves journalism from the periphery to the center of the political action, and it argues that black and white journalists played a larger role in shaping the state’s political history than previous historians have acknowledged.

For example, the book contends that John Henry McCray and his newspaper, the Lighthouse and Informer, deserve more attention in the history of the black press in the United States. At a time when black newspapers in the South were believed to be cautious and conservative—much like the Scott Family’s Atlanta Daily World— McCray’s newspaper called for a direct challenge to white supremacy. The paper demanded that black South Carolinians “reject the slavery of thought and action that created Uncle Toms and Aunt Jemimas” and become “progressive fighters for the emancipation of the race.”

The book also argues that the white press played a central role in organizing the resistance to the civil rights effort in South Carolina. White editors not only editorialized in favor of segregation, but they also took on distinct political roles as well. They launched the so-called “massive resistance” campaign and organized the White Citizens Council movement in the state. When massive resistance began to fail in the late 1950s, they turned to partisan politics. Working closely with William F. Buckley and other conservative leaders, white journalists from South Carolina helped create a new political home for white segregationists in the conservative wing of the Republican Party.

The book has been out since September 2017, but I have not left South Carolina history entirely. In the past year, I published three new pieces of journalism that grew out of my South Carolina research: “Before Breitbart, there was the Charleston News and Courier,” “The New York Times Journalist Who Secretly Led the Charge Against Liberal Media Bias,” and “Printing the Good Fight: The Importance of Black Newspapers in Columbia, S.C.” I also have a journal article coming out in fall 2018 on the evolution of the “liberal media” claim that includes a revelation that I discovered while researching the book, and am scheduled to deliver a paper about the role of journalists in shaping public discourse in the post-civil rights era South (1965-1980) at the International Communications Association conference in Prague in May.

Allison J. Steinke is a Ph.D. student at the Hubbard School of Journalism and Mass Communication studying social and mobile media, journalism, and social justice with an emphasis on the anti-human trafficking movement. Follow her work on Academia or ResearchGate.