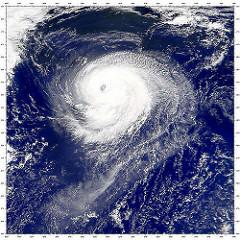 In the wake of Hurricanes Harvey, Irma, and Maria, many wonder what effect massive storms have on coastal populations. When natural disasters displace people, it is important to consider long-term population changes to understand how these people return home.

UMN sociologist Jack DeWaard and colleagues research “recovery migration” by comparing county-level data from the Internal Revenue Service on human migration flows both before and after Hurricanes Katrina and Rita. It turns out that many people do not move very far from their homes. Following a hurricane, people cluster closely together in nearby counties, especially urban counties. After the storm has subsided, displaced residents and newcomers are likely to move back to where they evacuated. However, they often move in stages, cycling through nearby locations along the way as repair and recovery efforts take time.

These findings demonstrate that natural disasters, often affected by climate change, may not result in the drastic population redistribution that many fear. However, they also show that we need to think about the long term, multi-step routes many people take to come back after catastrophe.

Sarah Catherine Billups is a graduate student in sociology at the University of Minnesota and an Interdisciplinary Doctoral Fellow at the Minnesota Population Center. Her research areas include culture, gender, and homeownership.