Dr. Kathryn Pearson is an expert on women and partisanship, also known as “gendered partisanship,” in the U.S. House. Her 2015 publication, Party Discipline in the U.S. House of Representatives, looked closely at the ways party leaders reward and publish members for their loyalty to the party or lack thereof. 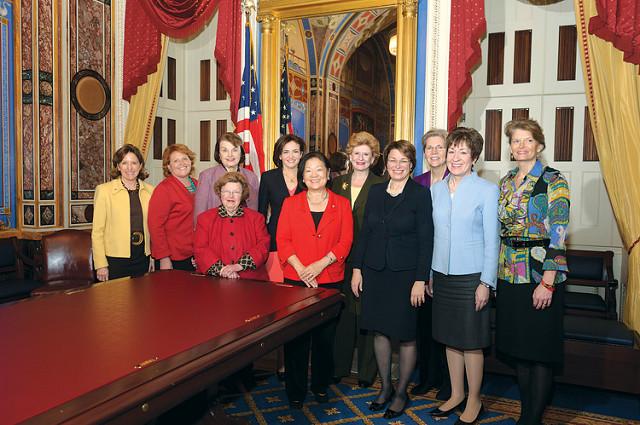 Female Senators in the US Congress. Photo Courtesy of Bread for the World via Flickr CC

Her forthcoming publication, Gendered Partisanship in the House of Representatives, will focus on the phenomenon of women and party loyalty in the U.S. House. In the context of Dr. Pearson’s studies, fundraising, speeches, roll calling, and attacking the other party on the House floor all serve as indicators of party loyalty. As she says, “With the recent increase of women in Congress and the increase of polarization of parties, there’s a lot we don’t know about gender and partisanship on Capitol Hill.”

With a combination of quantitative analyses and interviews with former members of Congress, staff, and former party leaders, Dr. Pearson has discovered that women are more likely to be loyal to their party—even if it is bad for their career. As soon as she’s able to analyze the first six months of the new Congress, she will publish Gendered Partisanship in the House of Representatives. This book will incorporate historic patterns of female leadership and party loyalty in the U.S. House as far back as 1989. So far, she has four main findings:

She attributes these findings to the underrepresentation of women in the U.S. House and the ways women have to take extra steps to prove themselves in general in a male dominated institution. She notes: “That’s not to say in isolated circumstances women can’t work across party lines, but I call the notion that women will bring bipartisanship into the House of Representatives into question.”

Allison J. Steinke is a Research Assistant and Student Fellow at the Minnesota Journalism Center. She is also a Ph.D. student at the Hubbard School of Journalism and Mass Communication studying journalism, social and mobile media, and social justice with an emphasis on the anti-human trafficking movement. Follow her work on Academia or ResearchGate.