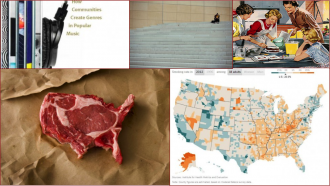 That’s right, we’re just going with it. I sometimes don’t have time to do the Roundup on Fridays, but I know you, the adoring TSP public, need to know! Hence, most likely the Friday Roundup will continue on Mondays for a bit, but hey, sometimes I’ll mix it up. Isn’t that what good Internetz users do? Wait. I’ve gotta go check with the hip kids…

Here’s what’s happened on TSP in the last week!

“Music and the Quest for a Tribe, with Jenn Lena,” by Sarah Lageson. From rockabilly kids to dubsteppers and punks, finding our musical tribe can be a key part of creating identity.

“Discussing the Civic Imagination with Gianpaolo Baiocchi, Elizabeth A. Bennett, Alissa Cordner, Peter Taylor Klein, and Stephanie Savell,” by Arturo Baiocchi. Reporting on how civically active Americans understand, talk, and act on their different visions of social change with the authors of The Civic Imagination.

“Affirmative Action and Racial Inequality,” by Evan Stewart. Racial inequality and discrimination are real, and diversity “happy talk” is doing little to fix that fact.

“Not Your Typical June Cleaver,” by Erin Hoekstra. On the complexities of a Pew Research report that stay-at-home moms are on the rise.

“People with Family Members in Prison Are Less Likely to be Engaged American Citizens,” by Hedwig Lee, Lauren Porter, and Megan Comfort. The sense of powerlessness experienced by prisoners’ loved ones seems to be keeping them away from civic engagement: they wonder, what can they do to change the world?

“While California Expands Insurance Coverage, Texas Blocks Health Reform—Despite Greater Needs,” by Ling Zhu and Markie McBrayer. Comparing the two biggest states and their reactions to federal subsidies to expand Medicare had a few scary results. Texans? Just go ahead and get vaccinated right about now, okay? For everything. Thanks.

Sign up for inbox delivery of the weekly roundup.