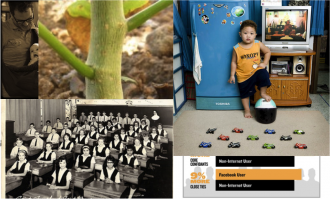 In Michael Pollan’s least-heralded, but perhaps best-loved, book, A Place of My Own: The Architecture of Daydreams, the author sets off to learn about architecture and building so as to create the perfect place to write. And he does! He eventually comes up with a little ship of a building, small but functional, with everything in its place and a pleasant view of his home at a nice enough remove to allow thoughts to bud and grow. How idyllic.

Back in the real world, I wrote my last roundup from an airport gate. This one’s being written from a parking lot on campus, where I hope that the wifi will hold out and my dogs, holed up in the car with me since our house is being painted and they’re known curmudgeons, will keep it down. Last week? I didn’t even manage to write one. Chaos—which is to say, actual life—gets in the way of so many grand ambitions.

The point here isn’t that Michael Pollan is a lucky bastard (though he is and, to his credit, he knows it). It’s that not having the ideal conditions in which to write isn’t what’s stopping us from brilliance. We could build our own refuge to write, we could dash off to a lovely quiet place like Green Gulch (a Buddhist community and farm in Northern California which, blessedly, doesn’t even get cell phone reception), we could Eat, Pray, and Love our way across every continent, and without simply putting pen to paper, we’d get nothing written.

So that’s the whole of my advice this week: to write, write. Write well, write badly, write on scraps of paper, and write by dictating good thoughts into your iPhone. Tweet, scribble, and call your friends. Find ways to just let your ideas out, perfectly imperfect, no matter where you are, and see what happens. Give yourself little assignments, write haikus, send a postcard. Or don’t. Writing is your choice, not some function of circumstance. If you don’t write this week, it’s because you chose not to. Clearly, I’m trying—join me!

Others who wrote in the past couple of weeks:

“Scalia Takes it from ‘Bad’ to ‘Really Bad’,” by Doug Hartmann. In which an amicus brief by the ASA is pushed aside in favor of one by Mark Regenerus.

“Social Sciences as STEM Disciplines,” by Chris Uggen. In which we learn sociology is a gateway to the harder stuff. Don’t get pressured at parties, kids. Then again, YOLO.

“Workplace Inflexibility,” by John Ziegler. In which companies like Yahoo! and Best Buy revoke work-from-wherever policies. No word on working from parking lots.

“Moving on Marriage,” by Andrew Wiebe. In which the Supreme Court takes on Prop 8 and DOMA and we’re reminded of Loving v. Virginia.

“American Cheese, Unwrapped,” by John Ziegler. In which an anthropologist seeks out a quiet, but tasty, social movement.

“Caste from the Past,” by Andrew Wiebe. In which Britons discover “lower, middle, and upper” don’t quite describe the classes as they are.

“His Biological Clock’s A’Ticking,” by Erin Hoekstra. In which, surprise! Dudes want kids, too.

“Why Medicalizing ‘The Mood’ May Not Work,” by Lisa Gulya. In which searching for “pink Viagra” might be replaced by a search for egalitarianism and stress reduction and all the laundry being done.

“Funny Looks? Muslims and Islamophobia in the UK,” by Erin Hoekstra. In which overt racism is replaced by “microaggressions” in post-7/7 London.

A Few From the Community Pages:

“Why the Decline of Catholic Schools Matters,” by Carol Ann McGregor.

“Does Africa Need a New Green Revolution to Fight Hunger?‘ by Ron Aminzade.

Forgive me, it's Friday. Friday makes me silly.

On a serious note, I really like the advice and encouragement about writing. Totally agree, we can't wait for perfect conditions to write. Like you say, it's okay when our writing isn't perfect. I write on a near constant basis, in some way, shape, or form. And I do my fair share of bad writing. But that's okay. We need to write and need to practice our writing. For me, it's all in pursuit of a great sentence or a few words beautifully expressed.