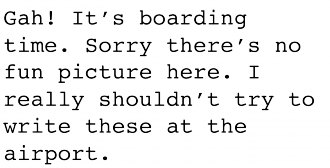 (Sung, clearly, to the tune of Elvis Presley’s ridiculous but earworm-y “In the Ghetto.” Because the last thing the airport needs is another hungry editor to feed.)

There’s a lot to learn about humanity in an airport. From the way they dress to their choices to either hang back to board or hustle to get into the plane and loiter for longer than any of the other passengers like a WINNER, I can’t help but marvel at what everyone gets up to. And that’s sort of the thing, right? Social scientists get to make a career out of this curiosity. Hopefully, they get to go a step further, using what they learn through their observation and analysis to help society, inform policy, support and change and inform.

I’m in the airport today because I’m off to a good 26 hours of the Midwest Sociology Society to talk to academics about how to go about that last part: informing. That is, I’m going to take an hour and a half to demonstrate, explain, and encourage clarity, brevity, and accessibility, because I absolutely think social science should be of service to society. I hope you’ll be able to join me later today. 1pm, somewhere in the Chicago Mariott. Oh, I hope it’s the Mariott.

For now, it’s on to the Roundup, then boarding. In the aiiiiiiirport!

“Repercussions of Incarceration on Close Relationships,” by Megan Comfort. In which Comfort shares her observations about just some of the trickle-down effects of prison policies on the family and friends of those behind bars. From accommodating clothing restrictions to creatively making birthday cakes from vending machine snacks, visitors experience prison in their own ways.

“Worst Spring Break Ever,” by Doug Hartmann. Not only was the basketball, weather, and travel disappointing, the Senate took a scythe to the NSF’s social science funding. To make matters worse, Doug then got sick. He doesn’t mention that part.

“Workplace Inflexibility,” by John Ziegler. As Yahoo! and Best Buy both rein in their once-lauded programs for results-based, rather than attendance-based work policies, social scientists scratch their heads. (Social scientists: always itchy.)

“Halfway There,” by Evan Stewart. In the grand tradition of TSP song lyric references, Stewart rocks some Bon Jovi while talking about divisions of household labor.

“What is Love?” by John Ziegler. Social scientists like Pepper Schwartz and Helen Fisher have been advising online dating sites for some time now. How well are they doing at predicting the best combinations for sweet, sweet love?

“Creating the Natural, Censoring the Wild,” by Kyle Green. Alternatively titled “No Monkey Business in the Zoo,” this item looks at new research from Penn’s David Grazian, who really won the title war by calling his original article, “Where the Wild Things Aren’t.” How could we top that?

“The Mating Game,” by Hollie Nyseth Brehm. Setting up fictional matches lets college students think through how their lives might be different depending on the families they form in the future.

And here’s where I’d add some cool stuff from the Community Pages, but it’s boarding time… (also there’s a sociologist on the airport news channel; it’s distracting)