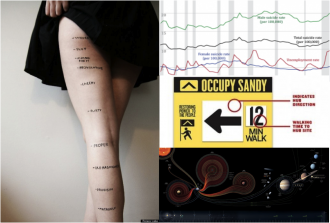 SocImages Reminds Us All How It’s Done

This week, SocImages saw its most popular post ever, and with good reason. “The Balancing Act of Being Female; Or, Why We Have So Many Clothes” contained a provocative image by art student Rosea Lake (one easily used in a classroom without uproar) and Lisa Wade’s thoughtful, sociological take. What was particularly interesting (I absolutely invite you to take a look and read through the comments if you haven’t already) is the way that Wade went in an unexpected direction and, in a tightly wrapped commentary—maybe 500 words or less?—used the image to help readers think not only about body policing and the ways in which women are (ahem) hemmed in when it comes to clothing choices, but how privilege dictates who can and cannot follow the “rules” of dressing appropriately. 12,000+ likes on Facebook and some 80,000 individual visitors later (not to mention readers on the Huffington Post, which has since reposted the piece), a lot more of the Internet is thinking sociologically. Take a read; it’s fantastic.

Here’s what the rest of us got up to this week:

“Social Fact: The Great Depressions?” by Deborah Carr and Julie Phillips. In which another set of authors shows the power of brevity, tying American recessionary periods to suicide rates (with the help of a fantastic graphic from Shannon Golden).

“The Urbanite’s Guide to Surviving Climate Change,” by Erin Hoekstra. In which social cohesion may prove as important as infrastructure in dealing with natural disaster.

“Shortage of Sick Days: Worse than Shortage of Flu Vaccine?” by Letta Page. In which Shamus Khan argues for paid sick leave as a public health measure.

“Whiteness, Sport, and NASCAR Nation,” by Kia Heise. In which and Office Hours interview comes to the classroom.

“Getting Students to Read,” by guest author Nathan Palmer. In which Sociology Source’s editor shares his method (a little more work for the teacher, but a lot more work from the class).

“Does Providing Publicly Funded Jobs to Hard-to-Employ People Reduce Crime and Drug Use?” by Sarah Shannon. Uses a large-scale data set and qualitative interviews to look at links between employment and recidivism.