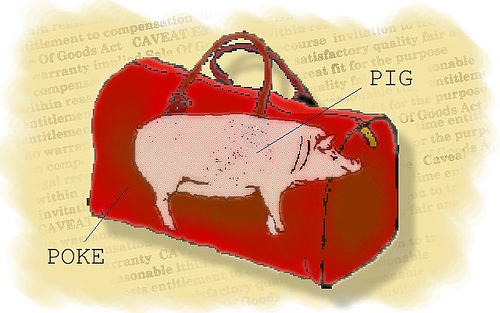 Why is the AIG bonus scandal so shocking? Wasn’t this sort of thing bound to happen as soon as our elected representatives signed off on a no-questions-asked $700 billion bailout plan? This isn’t to defend the insurance firm’s decision to use $165 million of their $30 billion chunk of federal “assistance” to pay hefty bonuses to some of the same executives who helped destroy the firm’s finances by investing in mortgage-backed securities (bonuses that AIG claims they were contractually obligated to pay). Rather, the point is that self-dealing is predictable when large sums of cash are bestowed without accountability.1

The surprise expressed by the most highly-placed officials in our government—I’m looking at you, Tim Geithner—rings as hollow as that expressed by the Bush administration when the market collapsed last September. It has since come to light that government officials and finance executives worldwide were on record warning of this catastrophe, and urging preventative action, well before the Fall. Assertions by the Bush administration that the economic crash caught them by surprise are as demonstrably false as their claims following another September catastrophe, seven years before, when they told us they had no inkling that terrorists were planning a massive attack on our soil. As we learned later, there was advance warning from credible sources (like FBI agents)—the Bush administration just chose to ignore it. They apparently did the same with the collapse of the financial markets.

With the AIG controversy, we’re seeing recent history repeat itself: if September’s market meltdown was a tragedy, this bonus scandal is farce. It’s reminiscent of that famous scene in Casablanca, when Captain Renault shuts down Rick’s Café for permitting gambling:

Captain Renault: I’m shocked, shocked to find that gambling is going on in here!
[a croupier hands Renault a pile of money]
Croupier: Your winnings, sir.
Captain Renault: [sotto voce] Oh, thank you very much.

What’s more, this post-bailout farce is playing out through one of the oldest and crudest tricks in the book: buying a pig in a poke. This genre of scam, in which a confidence man persuades a mark to make a risky purchase without examining the goods, goes back at least as far as the Middle Ages. When meat was scarce, gullible peasants could apparently be convinced to buy a “suckling pig” in sack (known as a “poke” in archaic English), without actually opening the sack. When they got the bag home and opened it, they found that the wriggling animal inside was actually a cat, who often ran off upon being liberated from the poke—hence the term, “the cat’s out of the bag,” meaning that a truth concealed has been exposed. As implausible as it seems, it’s so common for people to fall for this trick that phrases equivalent to the English “to buy a pig in a poke” exist in at least 25 other languages:

The main difference between our recent experience with the federal bailout and the medieval European experience with “suckling pig” purchases seems to be the price tag: we have the dubious distinction of having purchased the most expensive pig-in-a-poke in history! Going forward, this might be a good time to rediscover the concept of fair trade enshrined in Englishman Richard Hill’s Common-place Book of 1530: “When ye proffer the pigge open the poke.”

The problem is, under modern capitalism, it might not be possible to open the poke—at least in some transactions. There are two reasons for this: information asymmetry and systematic risk. The first issue is a consequence of living in complex societies with intricate divisions of labor. The specialization enforced by that kind of social structure makes it increasingly difficult to evaluate anything we buy, and increasingly necessary to take things on trust.

Consider the recent problems with melamine contamination of dairy products from China: until consumers started getting sick and dying, there was no way for anyone to know that the products were dangerous. In the context of financial markets, the Enron and WorldCom cases taught us that even the most diligent investors—the ones who read all of a firm’s financial statements, right down to the footnotes—can’t really know what they are buying. In the case of the contaminated dairy products, only the producers knew about the melamine; in the cases of financial corruption, only the corporate executives knew they were “cooking the books.” Like the medieval con artists selling bags of wriggling cats as “suckling pig,” the sellers withheld crucial information from buyers, and exploited the information asymmetry for profit.

But unlike the hungry “pig” buyers who could have opened the pokes to check the merchandise, there was no way for the buyers in these contemporary cases to know what they were really getting. They just had to make the purchases on faith, a faith placed in part in institutions to whom we have delegated the monitoring and sanctioning functions on which trust is based. Those institutions failed us—how they did so is the subject for another post, but the larger theme here is that part of what we’re seeing in the “bailout fallout” is a consequence of the buyers (the taxpayers who are footing the bill) being structurally unable to overcome the problems of information asymmetry.

The second problem, systematic risk, is the intrinsic risk underpinning any transaction, from a simple barter exchange to investing in complex financial instruments. This is the kind of risk that remains no matter how much information one has, how much insurance one buys, or how much one diversifies. Imagine you need change for a coin-operated washing machine, and you call your next-door-neighbor to see if she can give you four quarters in exchange for a dollar bill. What could be more transparent? You know your neighbor, the currency is standardized, and you have no reason to expect that she might be counterfeiting 25-cent pieces. But there are still many ways the transaction could fail, for reasons you could not foresee: for example, as you’re walking across the street to make the exchange, your neighbor drops dead of a heart attack brought on by an undiagnosed arrhythmia. That’s a systematic risk—in the broadest sense, it’s the risk we take by assuming that we and our transaction partners will live to fulfill our agreements with one another. In the financial world, systematic risk could come in the form of an outbreak of war or a pandemic, or what are often termed “acts of God” in the fine print of insurance contracts.

As a result of both systematic risk and information asymmetry, both of which are inherent in economic life, we end up buying pigs-in-pokes, faute de mieux. There is nothing else to buy. Capitalist development has colonized the life-world so completely that even if one was able to withdraw from social life and stop making transactions with others—living in isolation, off the grid, providing for all one’s own needs—these risks are still unavoidable. You might find that the plot of land where you grow your food was poisoned by a previous owner who used synthetic pesticides or stored toxic substances underground; if you’re lucky enough to avoid that hazard, you could still be wiped out by anything from a roving grizzly bear to a nuclear strike. These things are not in our control.

Yet we still get up every day and buy more of those wriggling sacks, hoping that whatever eventually jumps out resembles what we thought we were buying. From this perspective, the bailout, like the case of Long Term Capital Management a decade before—that was the hedge fund that demanded that investors fork over a minimum of $10 million, with no questions asked about the fund’s plans or investment strategy—is just an extreme case of “normal” everyday practices in which we all engage within complex capitalist societies. This is simultaneously reassuring and terrifying, because it suggests that the global economic crisis is not an anomaly, but literally the new business as usual. Unfortunately this means that, as with “extreme weather events” like Hurricanes Katrina and Gustav, we can expect more of the same in the years to come.

Lacking any words of optimism or consolation, I can only offer some distraction: the sweet revenge of the poked pig.

1. The whole deal is rather galling to those of who can’t get paltry sums from the federal grant-making agencies without a detailed proposal up front, and expense and status reports afterwards to keep us accountable.