Many worry about the immortality of our behavior on social network sites like Facebook. Regrettable behaviors can become Facebook Skeletons in your digital closet. However, I have argued before that what is equally true is that our online presence is extremely ephemeral. Status updates speed by, perhaps delighting us in the moment, but are quickly forgotton. The innundation of photographs of yourself and others is so heavy that particular moments often become lost in the flow. Our digital content may live forever, but it does so in relative obscurity. Just try searching for that witty status update your friend made on Facebook last month. It is this ephemerality of our online social lives that makes this art/design project by Siavosh Zabeti so interesting. When our Facebook lives are placed in a book, our socialization grasps at the tactile permanence of the physical.

When Facebook becomes a book from Siavosh Zabeti on Vimeo.

If books like this became popular, would we create our Facebook presence any differently given this new, more physical medium? more... 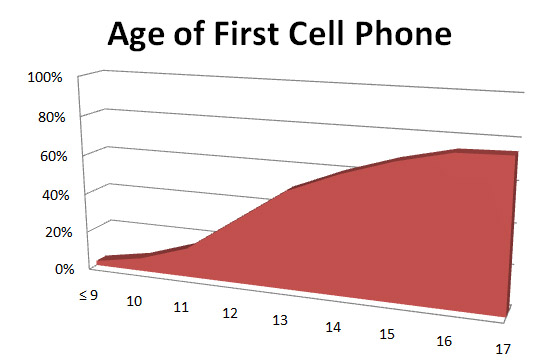 We frequently discuss how young people (i.e., “digital natives”) use technology on the Cyborgology blog.  Today, I have compiled and interesting graph illustrating the age at which today’s minors got their first cell phone.

More data  on this topic is available at the Pew Internet & American Life Project.

Cyborgology Editors Speak to NPR about Openess on the Web

Cyborgology editors Nathan Jurgenson and PJ Rey discuss their take on WikiLeaks, net neutrality, and other issue surrounding the free flow of information on the Internet. The complete interview is now streaming.

Zygmunt Bauman has famously conceptualized modern society as increasingly “liquid.” Information, objects, people and even places can more easily flow around time and space. Old “solid” structures are melting away in favor of faster and more nimble fluids. I’ve previously described how capitalism in the West has become more liquid by moving out of “solid” brick-and-mortar factories making “heavy” manufacturing goods and into a lighter, perhaps even “weightless,” form of capitalism surrounding informational products. The point of this post is that as information becomes increasingly liquid, it leaks.

WikiLeaks is a prime example of this. Note that the logo is literally a liquid world. While the leaking of classified documents is not new (think: the Pentagon Papers), the magnitude of what is being released is unprecedented. The leaked war-logs from Afghanistan and Iraq proved to be shocking. The most current leaks surround US diplomacy. We learned that the Saudi’s favored bombing Iran, China seems to be turning on North Korea, the Pentagon targeted refugee camps for bombing and so on. And none of this would have happened without the great liquefiers: digitality and Internet. more...

Should Information Always be Free?

The way in which information is shared in the digital age is headlining the news around many different issues. WikiLeaks is distributing thousands of classified State Department documents; the FFC Chairman is attempting to preserve net neutrality (i.e., the dictum that Internet service providers cannot limit the rate that users access different kinds of legal content); Facebook users are sharing more and more private details of their lives online.  Arguably, the same cultural debate is playing out in all of these cases: Is society best served when all information is free, or are we better off if some information remains private?

Silicon Valley has become a magnet for evangelists of the “information wants to be free” movement, what has come to be known as “cyberlibertarianism.”  Supporters often argue that the free flow of information is fundamental to democracy.  This is, in fact, the justification behind WikiLeaks’ distribution of confidential, proprietary, or otherwise secret information.

However, it is important to note that many of the most high-profile supporters of a transparent society, where information is free, are Internet companies, like Facebook and Google, that seek profit by collecting and sharing information about their users. Alternatively, companies who would benefit from restricting the flow of information (ISPs like, Comcast and Verizon) tend to oppose the principle that information should be free.

Cyberlibertarianism has range of other critics.  Clearly, the government has argued that state interests are threatened by the leaking of information. On a more micro level, many sociologists (including the authors of this post) are concerned that the pressure to constantly share more, and more personal information can be detrimental to individual users of Google, Facebook, and other social-networking sites. more...

In the social sciences, we often hear about, talk about, and preach about the relationship between theory and methods. Here, I present a poignant example their interconnectedness. 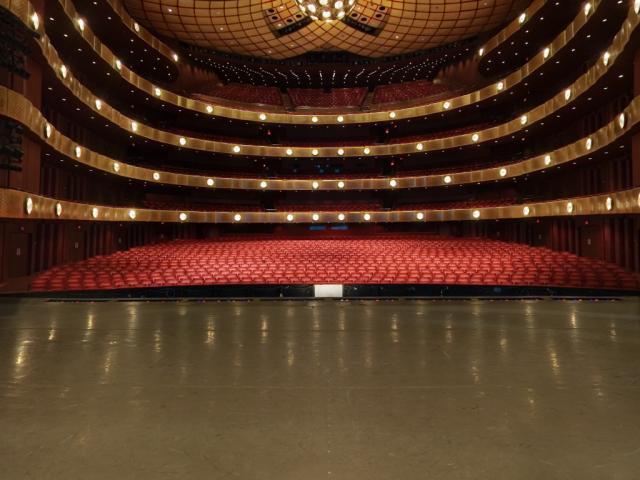 In a recent post, I argued that the accomplishment of authenticity in a cyborg era is particularly difficult. Drawing on Goffman, Turkle, and others, I argued that we live in a time of constant documentation, exposing the identity work that is supposed to remain hidden in the so-called “back stage.” I purported that our online and offline selves are not only mutually influential, but that we also engage in preemptive behavior in order to accurately present our ideal selves through multiple mediums.

Overall my theoretical point is this: As social actors we expect authenticity in others, and in ourselves. In a time of constant documentation, our online personas become our reflections, and they must not only be ideal, but also truthful. As such, we do not document falsehoods, but preemptively create documentable situations in an effort to present a self that is simultaneously ideal and authentic.

Here is the methodological conundrum: If the constructed nature of selves and identities must remain hidden not only from others, but also from ourselves, then how can we get people to talk about the labor involved in the identity construction process? In other words, how do we support the theoretical assertion? more... 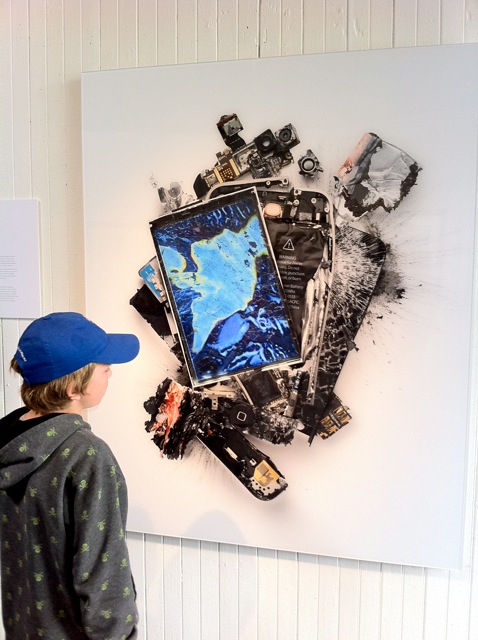 Apple “fan” and former employee Michael Tompert created a series of photographs depicting destroyed Apple products. Why do many find these images so striking?

Besides being beautiful deconstructions in themselves, these obliterated Apple products force us to come face to face with our love of sleekly designed magic-like devices. We might feel a tinge of horror seeing something we love so brutally and carelessly destroyed to the point of uselessness. Perhaps we have grown empathetically and intimately attached to these devices, bonding with them by day in our pockets and by night at our bedsides.

Alternatively, and moving from love to hate, perhaps they serve as a sort of catharsis by symbolizing our anger at the spectacle of consumer culture in general, and more specifically, Apple’s own quasi-religious Disney-like image. [a previous post on Apple-as-spectacle in response to the unveiling of the iPad]

Previously, I have discussed how Internet (particularly online dating) varies with age.  Today, I want to take a slight different tact and consider Internet use as a generational phenomenon. 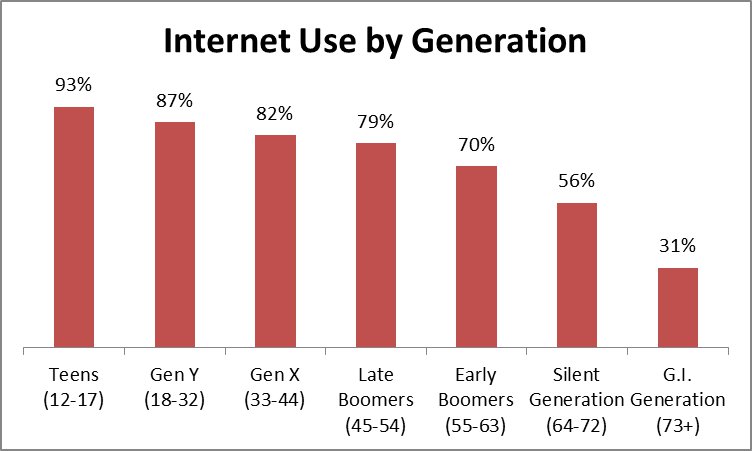 These data, no doubt, confirm expectations that Internet usage is less common in older generations; however, the severity of the drop in Internet use across generational groups is greater than virtually any other category, including gender, race, and class.   The generation gap still constitutes the greatest digital divide in America.

This Economist blog compares Wikileaks to Facebook as part of a broader trend towards transparency throughout society.

There are echoes here of Facebook founder Mark Zuckerberg’s famously aggressive position that society is evolving towards more transparency and less privacy (a belief which is certainly convenient for a social-networking site that wants to be able to sell users’ data). Maybe it’s something about tech geeks, or maybe it’s just related to the self-interest of people and organisations whose particular strength lies in an ability to get a hold of other people’s information. But it definitely seems like we’re learning a lesson here: while information may want to be free, human beings are usually better off when it’s on a leash. 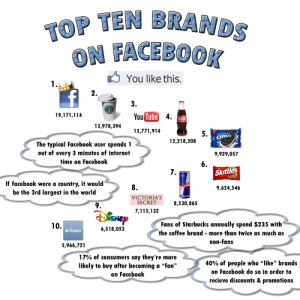 Advertising on social media is more than those segregated paid-for-spaces that display ads paid for by companies (e.g., on the far-right of your Facebook screen). This sort of paid-advertising has been shown to be so highly ineffective that some have predicted it will be the downfall of the social web. However, these predictions do not understand that the fundamental point of the social web (2.0) is that users are prosumers; they are simultaneously both consumers and producers of content. And advertising is no different. Advertisements that we simply consume worked in a consumer medium, like television. However, social media is a prosumer medium, and today we are the ones doing the advertising work of integrating corporate logos and branding into our profiles and news feeds.

Facebook’s ubiquitous “like” button reflects our modern task of self-presentation (and distinction) based on our taste in just about anything and everything, documented and compared to the various “likes” of any other visitor to your profile (and remember: what someone “likes” may not be what they actually like but what they want others to see that they like). In modern consumer culture, this collection of displayed “likes” will include corporate brands that one identifies with. This might mean clicking “like” on the Starbucks or Victoria’s Secret pages, which then becomes a part of your profile. more...