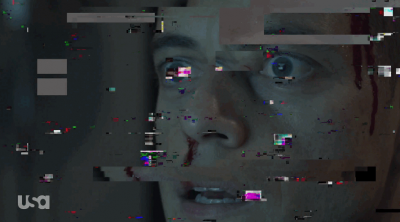 Warning: Mr. Robot spoilers abound (but, come on, what are you doing still not caught up with this show?).

In my first post for Cyborgology last year, I suggested that perhaps Elliot Alderson, the paranoid and delusional protagonist of USA Network’s Mr. Robot, was the epitome of a Deleuzian Body Without Organs—an extreme state wherein rhythms and intensities not available in the anatomical body provide access to a plane of immanence (though I also incorrectly suggested that Elliot is schizophrenic). I used his own self-tracking technique—a journal—and how this journal led to advantage being taken of him. If you’ve read my other posts here, you won’t be surprised to hear that I then used all of that as a critique of the quantified self. What can I say? When all you read is QS critique, everything you read is QS critique. After making my way through season 3, however, I’d like to revisit Elliot and what other sorts of theoretical signposts I might use to understand his character.

I am particularly interested in a scene from s03e04, “eps3.3_metadata.par2”, in which Mr. Robot, after a particularly aggressive rant to Tyrell and Angela, turns back into Elliot. The audio pops and the video skips a bit—Mr. Robot is “glitching”. In most of season 2, viewers had been cued to Elliot’s transitions by light static in the audio track, but show creator Sam Esmail and crew have implemented this trope in progressively more encompassing ways over the course of the series. The use of a glitch in film or TV is nothing new—from art house film A Colour Box (1935) by Len Lye to The Matrix and Wreck it Ralph. But in using the glitch to indicate the transition from Elliot to Mr. Robot and back (we rarely see the latter, making the episode four scene even more notable), Esmail and team use the trope to delineate a liminal space, one that might best be characterized by Legacy Russell’s Glitch Feminism.

As defined by Russell on this blog in 2012, Glitch Feminism

embraces the causality of “error”, and turns the gloomy implication of glitch on its ear by acknowledging that an error in a social system that has already been disturbed by economic, racial, social, sexual, and cultural stratification and the imperialist wrecking-ball of globalization—processes that continue to enact violence on all bodies—may not, in fact, be an error at all, but rather a much-needed erratum.

Russell’s work on the topic focuses on the body as a limit to be overcome through slippage—“glitch” comes from the Yiddish for “slippery area” and the German for “to slip”. She came to the concept through Nathan’s digital dualism, wherein the fallacy of IRL as distinct from online, distracts from the goings on both online and AFK. Reading Elliot’s glitches through Russell’s Glitch Feminism Manifesto, then, we see his slips between psyches as corrections—a fix for what he needs in the moment. In episode 6, “eps3.5_kill-process.inc”, static, color bars, video artifacts, frame skipping, and abrasive audio cues are all utilized in progressively more jarring ways as Elliot and Mr. Robot fight for control of their shared body, the former seeking to block the destruction put in motion by the latter (Elliot wins the battle, but not, of course, that day’s war). The glitch is there for the viewer to understand that a transition is happening, certainly, but also for Elliot’s body that, using Russell’s words, “exist[s] somewhere before arrival upon a final concretized identity.”

I am particularly taken by both Glitch Feminism and Elliot’s character because of the way they each resist a synthetic delineation between the technological and biological. Not because new computing systems are being developed with biological materials, but because old computing systems were built by human emotion. This is the general argument made by Elizabeth Wilson in her 2011 Affect and Artificial Intelligence—that “alliances between human and machine were calibrated through the affects of curiosity, surprise, contempt, interest, fear, and shame.” Throughout the work, she argues for a reconceptualization of AI away from the stereotypical “cool”, emotionless field for mathematicians and computer scientists and into a significantly warmer, more emotional place, eventually suggesting that the proliferation and improvement of AI technologies will increase when all parties involved agree on the aforementioned reframing.

Glitch Feminism embodies this reconceptualization by turning the metaphor of a cold, computationally-focused self on its head—the brain as affectless computer is gone. The body as vessel for emotional processing is brought to the fore. The glitch gives that body a chance against the white patriarchy that has marginalized it to this point. Russell is sure to point out that “Glitch Feminism is not gender-specific.” Elliot’s body, however, as it glitches between his outer persona and Mr. Robot, is being controlled by the women in his life—Darlene spies on him for the FBI, Angela uses him to resurrect her mother, White Rose has co-opted his skills for her dreams of global domination. Whether they understand it (White Rose) or not (Darlene), he is an empty vessel until they act. He is the [unoccupied] embodiment of Melvin Kranzberg’s first law of technology: that it is neither good, nor bad, nor is it neutral.

Today, AI systems are programmed from the bottom up. Siri is not pre-loaded with every possible question. Instead, when one Siri instance learns how to answer a question properly, it passes that information on to every other Siri (so to speak—most of this is happening in centralized, remote applications). The self-correction happening within these systems is a product of the programmers and participants (I’ll let you guess who actually gets compensated for their work…but we’ll leave Marx out of this for now). How, then, might we as participants cause these systems to glitch, correcting them, making way for the underrepresented bodies left behind?

Gabi Schaffzin is pursuing his PhD in Art History, Theory, and Criticism, with a concentration in art practice, at UC San Diego. He will never—NEVER!—shut up about this show.