Keeping the Demons at Bay 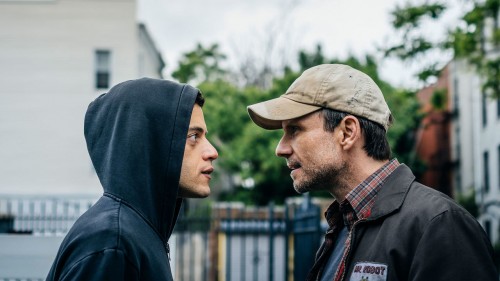 In the season 2 premier of Mr. Robot on USA Network, we learn that our protagonist, Elliot, has been keeping a journal. The explanation he gives his therapist, Krista, is that “It’s the only way to keep my program running like it’s supposed to.” That is, Elliot’s journal is one element of a strict regimen meant to keep his life in order and his demons at bay—in particular, the chimeric vision of his late father, a representation of Elliot’s anarchic side, responsible for triggering the cataclysmic “5/9 hack”. The practice is a noted technique in controlling schizophrenic episodes, though, ultimately for Elliot, it proves unsuccessful and Mr. Robot makes regular visits.

Self-tracking as a means to “healing” oneself is by no means relegated to the clinically diagnosed and, despite its often-qualitative output, is a popular tool used by the quantified-self movement. Characterized today by a plethora of commercial devices—from the step-counting FitBit to the calorie estimating SmartPlate and well beyond (in features, price, and absurdity)—the quantified-self movement is built upon the ethos that the neoliberal self-governed body will find “self knowledge through numbers”. As has been documented many times on Cyborgology, the self knowledge advertised by QS members and their celebrated gadgetry comes at the risk of one’s personal data being exploited for commercial motives. As for our hero, while on an Adderall-fused fit of rage against the church and all its promises, Elliot drops his journal in the trash, where it is picked up and given to Ray, Elliot’s neighbor who is looking for some tech help.

When Ray reads Elliot’s journal, he finds the hook with which to relate to Elliot by sharing tales of his own demons. He effectively uses Elliot’s own self-tracking data to sell Elliot on helping him. Of course, Ray’s motives are far more nefarious than just help with “computers”; his Tor-based market deals in all sorts of contraband. Of this, Elliot is unaware, but he begins to trust Ray and helps. When he steps too far into Ray’s business, however, Ray’s henchmen pummel Elliot into a near-death unconsciousness. This, then, is where we finally see Elliot ready to come to terms with his demon: Mr. Robot provides Elliot with a sitcom-world fantasy during which he can recover and avoid feeling the physical pain of wounds handed to him by Ray’s crew.

This is the Deleuzian Body Without Organs—an extreme state wherein rhythms and intensities not available in the anatomical body provide access to a plane of immanence. From A Thousand Plateaus: “The BwO: it is already under way the moment the body has had enough of organs and wants to slough them off, or loses them…The schizo body, waging its own active internal struggle against the organs, at the price of catatonia” (150). In the beginning of the season, as Elliot describes his regimen, he emphasizes his wish to control his life and keep Mr. Robot out of it. But his efforts backfire and his own body gives way to catatonic state—a performance, choreographed by Mr. Robot himself, one that saves his life.

Are we, then, to see the quantified-self as inhibiting any chance for Deleuzian immanence or seeking those rhythms and intensities? Well, yes. But before continuing, I’d like to suggest that the individuals building the quantifed-self world—the designers, developers, marketers, investors, and others making commonplace the dreams of self-trackers everywhere—might be likened to the philosopher Elaine Scarry’s “torturers” as they turn a feeling or condition into something seen or heard, make it real, and take advantage of its apparent state. In her 1985 The Body in Pain, she writes:

If the felt-attributes of pain are (through one means of verbal objectification or another) lifted into the visible world, and if the referent for these now objectified attributes is understood to be the human body, then the sentient fact of the person’s suffering will become knowable to the second person (13).

These torturers translate the intangible into the tangible, forcing its reconstruction in a purely visible form, giving us reason to doubt when a visualization may not adequately represent, to treat when a threshold is misplaced. But both the act of tracking and the output of the devices comfort us and so we are willing to share our data and open ourselves to the kind of pain our torturers wish to inflict. Per Scarry, just like the quantified-self, “Torture systematically prevents the prisoner from being the agent of anything and simultaneously pretends that he is the agent of some things” (47).

I do not wish to erase the struggles of those with pathologized mental conditions. Instead, I hope to use Elliot’s story as a means to recognize the quantified-self’s dangers, beyond privacy or accuracy issues. In The Body in Pain, Scarry offers that we might move beyond the destructive forces of war and torture through acts of creation. That is, imagination—her counter-force to pain—will help us find meaning in experiences and objects. This imagination, it seems, once activated, will be simultaneously utilized and served by the Body Without Organs as we sense the disorganized and intense realities which may end up protecting us.

Gabi Schaffzin is pursuing his PhD in Art History with an Art Practice concentration at the University of California San Diego. His art and research consider the visual representation of pain and illness in a technologically mediated world dominated by a privileging of data over all else. You can see the emerging dialog between his research and artistic practice—much of which draws on the imagery and rhetoric of advertising and product design—at utopia-dystopia.com. He’s on Twitter as @GabiSchaffzin.