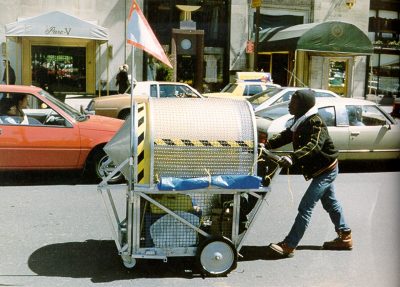 Last week, I introduced some characters to my argument: Orphan Black and its writing and consulting staff, Mr. Robot and its creators, the Cybernetic Culture Research Unit and Nick Land, accelerationism, and hyperstition. Need a refresher? Find it here. Now, I’d like to take a brief detour in order to introduce another important character here: speculative design.

If you’ve been in or around the design academy in the past decade, you will no doubt have heard the word “speculative” thrown around quite a bit. Colloquially, speculative design (or design fiction, or critical design) uses methodology and mediums traditional to the design studio (that is, the division of labor, tools, prototyping, and manufacturing processes common to industrial and graphic design shops) in order to produce visual artifacts from the future. One oft-cited project is the Faraday Chair (1995) designed by Anthony Dunne, erroneously but popularly labeled as the field’s progenitor. Dunne suggested that radio waves carrying wireless communication would eventually crowd our airspace to the point that we would need a physical respite from their electromagnetic effect. As part of his PhD at the Royal College of Art he, with the help of his collaborator Fiona Raby, installed in a gallery a large plexiglass box with an air tube and a pillow and had a model lay inside, supposedly “protected” from the invisible radiation of wifi and bluetooth messages. 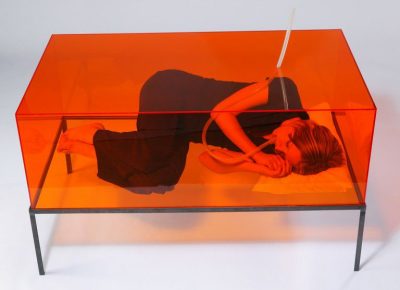 Speculative design, however, is not as new as some will have you think. One of its earlier figures, Krzysztof Wodiczko, grew up in a post war autocratic Poland—an experience that significantly shapes his work. Trained as an industrial designer, Wodiczko began his career working for a small Polish electronics manufacturer, but quickly turned to his design education as a means to develop pieces which “could interrogate ethical and political voicelessness” (102). It was in this vein that he designed and fabricated the Personal Instrument (1969), featuring a mic’d up helmet, sound-canceling headphones, and two gloves with light sensors. As the wearer reduces how much light hits the sensors on their hands, sounds from their immediate environment are blocked out and vice versa. About the piece, Wodiczko writes:

I was in a strange position: a designer employed by the state industrial corporation while trying to establish a critical and ironic dialogue with a real and monstrous designer—the communist state itself—who was in total control of the entire society and treated it as a single work of art or design…In the Personal Instrument, I somehow represented myself, my colleagues, and possibly many others, swimming “freely” in a world of sounds and speech, yet remaining silent. (102) 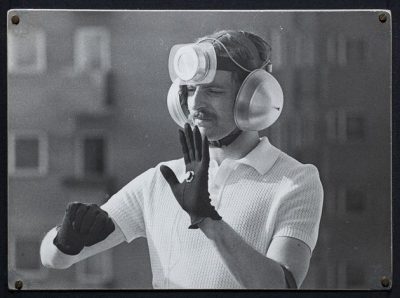 Eventually, Wodiczko labeled his flavor of design “interrogative” and in 1994 he penned a manifesto of sorts. In it, he declares that interrogative design “takes a risk, explores, articulates, and [responds] to the questionable conditions of life in today’s world, and does so in a questioning manner” (16). One of Wodiczko’s more well-known pieces, Homeless Vehicle Project (1988–89), was designed in consultation with homeless individuals in and around Philadelphia and New York City. The piece features a rolling cart, complete with aluminum can storage, sleeping cubby, and safety flag to make sure its presence is known from afar. The artist created the Homeless Vehicle

in the context of jungle capitalism, along streets and parks of New York City…[where] the petrified homeless, dying of their wounds or of malnutrition were advocating the benefits of American freedom in front of monuments of Washington and Lafayette, thus revivifying and reanimating these former dead. (xiv)

When asked about its viability as a mass-produced vehicle, Wodiczko leans on the value of a prototype:

“The minute you present a proposal, people think you must be offering a grand vision for a better future.” They can’t see a thing like the Homeless Vehicle…as the “concretisation” of a present problem, a makeshift transitional device, or an aesthetic experiment. Instead, “they think it must be designed for mass production…taking over the cities.” (Wright 1992, 272-273)

In effect, the “people” want to know if it’s real. Wodiczko argues it need not be.

I return, then, to last week’s post and Delphi Carstens on hyperstitions: “the trauma and fear engendered by their cultural ‘makeovers’…merely serve to further empower [their] basic premises and fan the flames.” Surely, seeing Faraday Chair in a gallery in 1995, complete with model and pillow and breathing tube, a viewer understands it is a piece of critical design (or is it art at this point?). Having read the plaque, our gallery visitor walks away considering the health risks of an inevitable flood of electromagnetic waves into their apartment (remember, this is well before “wifi” or “AirPort” or “Bluetooth” became household names). Walking out of the gallery and into the street, however, does a passing Homeless Vehicle engender in our viewer a sense of anxiety for the homeless it proposes to serve? Or, seeing a working prototype in use, do they feel a sense of relief that a “solution” to the homeless “problem” is available, relinquishing them of any obligation to do their part?

Writing this now, I feel a sense of crisis. Dunne and Raby, having popularized the field of speculative/critical design by making it a central focus of the now defunct Design Interaction program at RCA, have been busy preparing visions of future western cultures, visions bereft of refugees but complete with “Anarcho-evolutionists” and “Communo-nuclearists”. Wodiczko has been using high-powered projectors to cover monuments and buildings around the world with the recorded stories of members of marginalized communities such as women factory workers in Mexico or US war veterans. Certainly, I don’t wish to suggest that the Polish artist is any sort of martyr—he develops his work while on the Harvard Graduate School of Design faculty payroll. But I do very much want to love his methodology—one that he argues “attempts to heal the numbness that threatens the health of democratic process by pinching and disrupting it, waking it up, and inserting the voice, experiences, and presence of those others who have been silenced, alienated, and marginalized” (xiii).

Are Dunne and Raby trying to “heal” anything? They suggest that by identifying a current sociotechnical trajectory and trying to plot its future through the creation of material artifacts that present the audience with that future, they can provoke discourse on the desirability of that future. You can see, then, why our old friends, the accelerationists would prefer this methodology—especially those on the left, who see projects such as Occupy and the Arab Spring as having failed in their very un-futuristic shortsightedness. So instead of trying to figure out who gets to sleep in the warm tents once the snow comes, I guess it’s better to forget about sleeping altogether and just leaning into our four hour work week to build systems of automation that will most certainly save us from late capital’s technocratic grip?

Where are we left then? If we envision projects to address homelessness today, we are absolved of needing to worry about it tomorrow. If, instead, we envision what homelessness looks like tomorrow, then we need not worry about today—our hyperstitious ways will materialize the answers. Our real projects are fake, so we must rely on our fictions?

If you’ll allow me to return to television (warning: spoilers ahead, tread lightly), consider that all of the accelerationist projects and hyperstitious speculative design pieces being extruded slowly through the 3D printers and from the laser cutters of the shiny new “makerspaces” of  otherwise underfunded art and design departments are not in the service of dismantling heavily capitalized corporate cloning projects or bringing down the E-Corps of meat space. At first blush, this makes perfect sense. Firstly, we mustn’t upset the backers of said spaces. Secondly, and perhaps more obviously (absurdly?), there isn’t a heavily capitalized corporate cloning project, nor is there a Sino-American conspiracy involving multinational corporations, cryptocurrency, and a Swedish executive-cum-hacker (and if you believe there is, you must obviously sleep with a tinfoil hat on your head).

At this point, I’ve brought you with me down a big of a rabbit hole. There are questions of scale (are we fixing capitalism or cloning?) and medium (metal, Photoshop, or television? Maybe all three?) and channel (gallery, street, or BBC America?) and more. So in my next post, let’s see if I can’t wrap this up and finally start to answer the questions I posed at the beginning of last week’s piece: when is fiction too fake, reality too real?