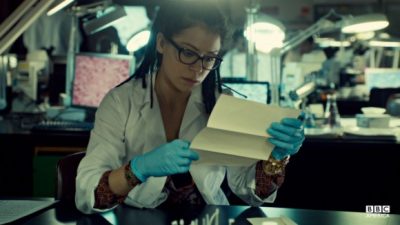 At what point does a fictional tale of a present day technocapitalist advancement and the characters embroiled in its aftermath turn into a dystopia? Is there ever a clear threshold between the plausible and the absurd? And what responsibility does the artist or author have towards their audience to make clear the realism of the piece?

Spoiler Warning: you may want to tread lightly if you haven’t yet but still plan on watching through season 2 of Mr. Robot and season 5 of Orphan Black.

In Graeme Manson and John Fawcett’s Orphan Black, which recently wrapped its fifth and last season on BBC America, a young con artist discovers she exists for very complicated reasons. She is at once unique in her willingness and ability to protect her family by destroying the systems which created her, while simultaneously living as one in (at least) 274 other women who are genetically identical. Along with their science consultant, the creators and writers of Orphan Black built a world in which capitalists, religious fanatics, a wealthy mad man, and scientists (though many characters would cross into more than one category), came together to circumvent ethics, legalities, and well-established scientific notions as they sought wealth, immortality, and the secrets to human kind. Good thing it was all made up.

And yet Manson and Fawcett have never shied away from revealing their reliance on Cosima Herter, the show’s science consultant. Herter, a scholar in the History of Science, Technology, and Medicine, spent her time on the show researching the science referenced, challenging writers to reconsider assumptions they’ve made about, for instance, the relationship between science and religion, and generally ensuring a tenable story. Manson has said that Herter’s insights “help to inform the big picture even if it’s not overt. So those are important thematic things. We don’t want it to take over the show, but we want it to be such a part of the fabric that you can’t avoid it.” Still, what value does the show’s mostly-believable science1 bring?

The same might be asked about Sam Esmail’s Mr. Robot, in which a relatively unbelievable apocalypse occurs in an extremely believable world. There is a very small gap between what Esmail and his writing team create and what we understand to be our current economic and technocratic situations—at least pre-5/9 hack. Esmail has said that he works hard with consultants to ensure that the technology for the show is plausible, based on non-fictitious products and events.

Loosely, the term “hyperstition” refers to the way that new ideas propagate through culture, the way that fictions have the power to shape the “real” future. The term was coined by the Cybernetic Culture Research Unit (Ccru) out of Warwick University in the mid-90s. Ccru was a highly problematic experiment in renegade academics, disbanding almost as quickly as it came together, alienating outsiders and insiders alike along the way. Perhaps the most important concept to have emerged from Ccru, however, was that of accelerationism.

Today, it is generally understood that there are two flavors of accelerationism: the original, “right-wing” version and the newer, leftist variety. The former, developed by Nick Land, one of the founders of Ccru and a philosopher oft-cited in alt-right/neo-Nazi texts, proposes to speed up the capitalist project to the point of technological singularity and ultimate efficiency. The latter, popularized in recent years by Alex Williams and Nick Srnicek, argues that full automation of labor, combined with a universal basic income, means technology will free the working class from capitalism altogether—the traditional left, they claim, will stagnate as long as projects such as Occupy are its chosen path of revolution.

Mr. Robot and Orphan Black become hyperstitious, not because their individual premises have necessarily come to fruition, but, as Delphi Carstens writes of hyperstitions in general, they’ve done so in the sense that “the trauma and fear engendered by their cultural ‘makeovers’…merely serve to further empower [their] basic premises and fan the flames.” That is, the anxiety produced by these shows might be enough to force an audience to consider their realism. Still, the “realness” of these shows is limited by the genre and medium. That is, in order to tell the story from Sarah Manning’s or Elliot Alderson’s perspective, we as viewers must understand immediately that this is a fiction—it is not shot as a documentary or news report.

But, once again, what if they were?

In my next post, I’d like to explore what sorts of efforts are currently made by artists and designers in the name of envisioning and/or making a future. I’d also like to work through what sorts of aesthetic or programmatic decisions leave a viewer considering a piece to be real, fiction, or fake. I will use more examples of various types of art that could be or seems to be about a “truth” and hope eventually to challenge artists to play with the boundaries of when these truths are revealed.

1 There is a minuscule element of the supernatural that helps the clones survive, but I have yet to find anyone angry enough to write about that.