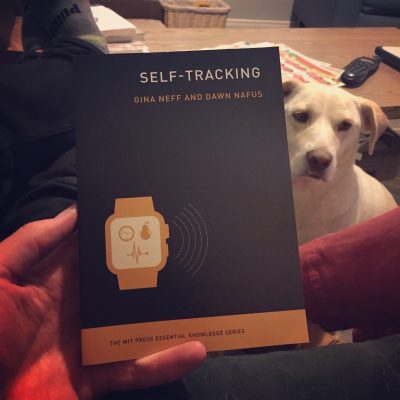 Back in January, I wrote about Deborah Lupton’s The Quantified Self, a recent publication from Polity by the University of Canberra professor in Communication. In that post I mentioned that I planned to read another book on the QS movement from MIT Press, Self-Tracking by Gina Neff, a Communication scholar out of University of Washington, and Dawn Nafus, an anthropologist at Intel. And so I have.

Much like Lupton’s book, Self-Tracking is best utilized as an introduction to the structures and cultural context in which the quantified self operates. The work begins with a relatively broad introduction to what the quantified self is (the authors differentiate between lower-case quantified self as the general self-tracking industry and uppercase Quantified Self as the Meet-Up-ing, annual-conference-ing, ever-proselytizing community) and what practices the term encompasses. Just as in Lupton’s book, we are treated to insight from Cyborgology’s super-famous past contributor, Whitney Erin Boesel, and her “Taxonomy of types of people”. As I noted back in January, however, Lupton uses a great deal of ink giving example after example of QS devices and services; the authors of Self-Tracking sprinkle their examples throughout which helps the book flow in a significantly more natural manner.

Neff and Nafus also narrow their focus on the health-related aspects of QS. For instance, the pair consider what sorts of problems a doctor might encounter when a patient brings self-tracked data (spoiler: a whole bunch). In considering how this differs from Lupton’s account, I am tempted to suggest that her analysis touched on a much broader swath of the QS market—but this is to consider there to be a difference between QS devices and health-related tracking. That is, as I read Self-Tracking, I wondered if there are any QS devices not health-related. What is the boundary between the body and health? How are normal bodies and healthy bodies any different? Could a QS device be marketed as something that will help you become something other than healthy?

Most of these questions are not explicitly asked by the authors of Self-Tracking. Lupton, on the other hand, does delve into more theoretical questions of what defines the self—at one point suggesting a QS-enabled prosthesis of selfhood, rendering “self-extension possible” (70) (Neff and Nafus refer to a “prosthesis of feeling” at one point, but this is a different issue). In some respects, reading Quantified Self and Self-Tracking together provides a reader with perhaps the right balance of depth—into the utilization of self-tracking in the service of and complementary to the healthcare industry—and breadth—across multiple theoretical categories of data and selfhood.

Still, one thing I don’t get from either work is the answer to the question, where did this all come from? That is, what is the history of the quantified self a history of? Both Lupton and Neff and Nafus offer anecdotal histories of Benjamin Franklin tracking his wellbeing on a small piece of paper in his pocket or the launch of the Quantified Self Meet Up in 2007. Neither, however, consider the social or cultural phenomenon that led to the proliferation of behavioral modification through self-tracking. This is something I hope to write about in future posts, but for now, I want to make it clear that I am not necessarily faulting these authors for the lack of this history.

Instead, it is important to consider that both books sit in very precarious positions academically. That is, these scholars took great risk spending so much time and effort to publish in the long-form on a subject-matter which is changing just about weekly. Already, Neff and Nafus’s assertions about FDA regulations feel outdated under the Trump administration (note that Trump has not taken any direct actions regarding the FDA quite yet, but it’s hard to consider any Obama-era regulations or policies staying intact throughout all of Trump’s time as president, however brief or extensive that may be). This is perhaps why Self-Tracking is part of MIT Press’s “Essential Knowledge Series”, which, per the publisher’s website, “offers concise, accessible overviews of compelling topics…expert syntheses of subjects ranging from the cultural and historical to the scientific and technical.” Even the physical book itself feels temporary—more like a 5”x7” pocket guide than something that belongs on library shelves for the foreseeable future. I think both of these books would be excellent reading for students just learning to question the hegemonic properties of the technologies being heralded for whatever reason its marketers choose.

For now, the search continues for more QS scholarship.

Gabi Schaffzin is a PhD student at UC San Diego in the Visual Arts department. He spent probably too much time fretting over the typography choices of the book he reviewed in this post.