Code-switching and linguistic acrobatics on the internet 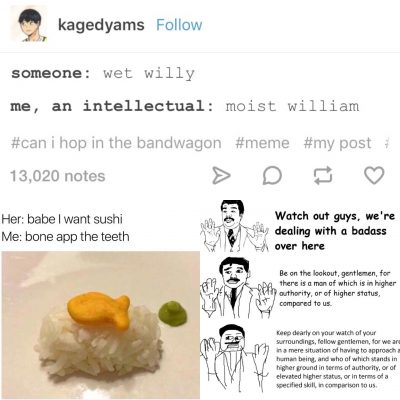 When I was conference-hopping last month, I caught up with an academic friend who had unfollowed me on Twitter. While transiting from a proper academic conversation at the dinner table of a nice restaurant to a more intimate catch-up about our personal lives over drinks in a cosy bar, my friend admitted that they thought my use of Twitter was very “brave”. I didn’t understand. Specifically, they had unfollowed me because my Twitter stream was too “cluttered” and “spammy” and my tweeting habits were too frequent. It seemed “brave” was polite-speak for “homgh aren’t you afraid someone important might see your tweets”?

You see, my friend curates a rather professional persona on their Twitter account. They announce new publications, tweet links to other academic papers within their research interests, “heart” research announcements they want to archive from other academic tweeters, or live-tweet good soundbytes from conferences. Like many academics, I engage in all of these activities too. But alongside these mechanisms of socializing research, I also often tweet my favourite Pusheen gifs without context, muse about unimportant things in life, subtweet random interactions I witness throughout the day, whine about being awake at 0300hrs, and publicly declare my undying love for chicken nuggets – all under the same handle.

My Twitter bio reads: “my twitter is frivolous. navigating academia while whining about the weather.” in small caps (because, you know, that’s supposed to convey that I’m not 100% serious on Twitter all the time). I also tweet half-serious Public Service Announcements every time a new surge of tweeters follow me post-conference to forewarn them of the mixed-genre and frivolity of my content – this, because I understand that even among academics we use Twitter for various reasons to express various things to various audiences. Yet for all these worries, there are many tweeters like me just as there are many tweeters like my friend. Some of us code-switch between audiences, adopting different registers depending on circumstance. On the internet, such code-switching takes place both across platforms and within platforms, across handles/accounts and within handles/accounts. It’s not too dissimilar from how my friend and I progressed from serious adult academic conversation in a nice restaurant where the length of the table, brightness of the lights, and proximity to other patrons set the tone for our conversation; to personal intimate catch-ups in a cosy bar where the array of cushions on a comfy couch, soothing jazz music, dim lights, and overall decorum of friendly bar staff lubricated a different kind of sociality.

Code-switching and linguistic acrobatics influenced by internet-speak have permeated various demographies and parts of the world, albeit with different intensities of uptake and with a curious blend of glocal hybrids. On Tumblr and 9GAG where I, an anthropologist of internet culture, live, three great memes of 2016 address young people’s code-switching skills. In this post, I share some of the “bone apple tea”, “me, an intellectual”, and “increasingly verbose” memes I have been collecting in the past year and their implicit messages of youth savvy.

I got my first phone as a teenager 16 years ago. The oldest niece in my extended family is 16-years-old this year. I grew up in a time where my over-protective parents would occasionally go through the text messages in my phone if I left it charging and unattended some where in the house (I eventually learnt to sleep with my phone under my pillow). I watched my niece grow up in a time where her super cool mom (i.e. my super cool cousin) texts her like a friend using the full array of emoji, stickers, and flashing gifs. One time my cousin asked one of the 12-year-old nieces to explain a specific internet meme to her; they did so willingly and thought their mom, “a real adult”, was pretty cool. When I asked one of the 12-year-olds about an Instagram meme they were posting, they thought I, a “young adult”, was super uncool.

The point is, our uses, understandings, and comfort with technology change over generations and between cohorts. Yet some moral panics never die. A vast majority of reports from the press and popular media that focus on young people’s digital vocabularies are still fixated over sexting and acronyms – acronyms that are, to be honest, some times rather obscure and archaic from current practices and vocabularies in circulation. And when such public anxieties are manufactured over and over to resurrect prime time television numbers and reap easy clickbait-for-advertising profits, we lose the opportunity to appreciate the magic of watching young people’s savvy and wit in evolving internet vernacular.

bone apple tea is a deliberate misspelling of the French salutation bon appétit. In this meme, users attempt to string homophones loosely similar to bon appétit to caption their food pictures. Of the hundreds of variations, the few that have gained traction and become sub-memes of their own include “bone app the teeth” and “toe tap the fleas”. I enjoyed watching this meme progress on Tumblr (usually via screenshots of Tweet pics) as the homophones evolved beyond recognition. Soon, the game shifted from creative homophoning of “bon appétit” to guessing what the original food item of a deliberately bad homophoned phrase was. Some of my favourites were “a chick ham seizure sad lad” (a chicken caesar salad), “smack the pony and leave” (macaroni and cheese), and “hoe maid pete sir end ships” (homemade pizza and chips). Bless these creative citizens of the internet and their bemusing homophoning abilities.

me, an intellectual is an unnecessary formal or literal synonymizing of a common catch-phrase. Many of the viral ones on Tumblr involve translating curse words or colloquial synonyms for the penis.

Given the cultural norm of Social Justice Warriorhood on Tumblr, over time this meme was used to convey one’s political identity and stance. For instance, when a certain Public Figure was calling then-Secretary Hillary Clinton names on public stages and in social media posts, Tumblr took to address Hillary Clinton in full as “Madame President Hillary Rodham Clinton” to convey their respect and support towards someone of her caliber. Tumblr is also one of the safe spaces on the internet for discussions relating to diverse family structures. What popular culture calls a “love triangle” filters through “me, an intellectual” to be acknowledged as a “healthy polyamorous relationship”. Most recently, in response to a circus of mainstream and popular media outlets rebranding and normalizing a certain Public Figure’s political ideology, Tumblr translated “Alt-right” as “Neo-nazi”. What started out as young people expressing unnecessary verbosity ended up becoming a translator for truths and political claims amidst competing hegemonies of discourse.

increasingly verbose is a succession of degrading art work alongside increasingly complex captions. It is likely a combination of two memes. The text on the right is a extended variation of “me, an intellectual”, while the accompanying image on the left degrading in quality and skill is reminiscent of the “hyper realistic drawing” meme on 9GAG. On 9GAG, 9GAGgers with artistic talents were originally sharing very realistic drawings of everyday objects, and would include in the title the number of hours it took them to finish the project. In response to this, some users blessed with sarcasm and wit began hijacking the meme with “drawings” that were actually photographs, while others submitted intentionally bad and sloppy drawings with exaggerated “completion times”. I love this meme for 9GAG’s ironic celebration of mediocrity alongside a mockery of needless formality.

trying to meet the word count

Whether you’re dabbling in suspicious homophones, using an intellect translator, flexing your illustrative mediocrity, or struggling to thesaurus your way through an overdue essay, the internet is a beautiful space for multiple Englishes and languages to converge and rub out sophisticated and equally mundane internet vernacular with increasingly obscure backstories and complex discursive politics. Young people aren’t just NIFOC while 99 for 53X. Long live internet speak. Long live Baby Kangaroo Tribbiani.

Dr Crystal Abidin is an anthropologist and ethnographer who studies young people’s relationships with technology and social media. Reach her at wishcrys.com and @wishcrys.

[…] Code-switching and linguistic acrobatics on the internet […]