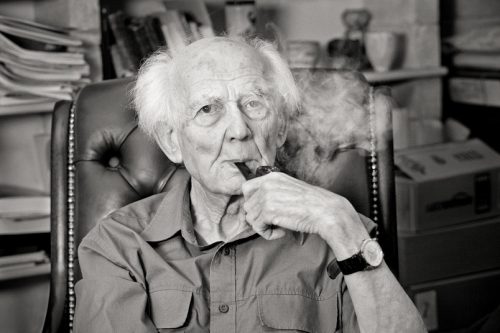 Readers interested in social theory will likely have heard the news of Zygmunt Bauman’s death earlier this week. Bauman was influential to many of us at Cyborgology. His ideas have been cited in numerous posts throughout the past six years, particularly in the early days of the blog, when Nathan Jurgenson and I were studying his work with our advisor George Ritzer. As a small memorial to Bauman, I want to take a moment to look back at some of the ways he inspired us. (I’ve even included a couple quotes from Sociology Lens, where Nathan and I got our start as bloggers!)

Zygmunt Bauman’s “liquidity” thesis about our late-modern world becoming more fluid seems relevant in light of the “transumer” and “virtual commodities”, both having received recent attention… “Stuff”, for many, is decreasingly allowed to solidify on our shelves and in our attics, instead flowing in a more liquid and nimble sense through consumers’ lives… the trend is towards “lighter” exchange as opposed to the solid and heavier exchange of physical goods. Microsoft was Bauman’s example of “light capitalism”, producing light products such as software, which is, opposed to heavier items such as automobiles, more changeable and disposable.

Almost a decade ago, Bauman viewed Microsoft as the paradigmatic example of the lighter capitalism because software was easily changeable and disposable. Today, Web 2.0 marks a further lightening. User-generated content is not largely dictated by corporate structures. Corporations on Web 2.0 do not have to dictate efficiency and worry about waste because Web 2.0 is a digital environment where content and labor is abundant. Thus, corporate entities on Web 2.0 can become more than liquid, they are gaseous; more than light, they are nearly weightless.

Bauman famously speaks of “liquid modernity” where traditional social structures are melting away and fading ambiguously into one another.  He argues that things which are liquid, flowing, and mobile tend to undo things which are rigid, solid, and stable… Mobile communication networks increasingly provide concrete examples supporting Bauman’s theory and Haiti is only the latest instance… In the ten days following the earthquake that devastated Haiti’s capital, Americans used text messaging to donate over $30 million… The cell phone has made transferring money more immediate, more flexible, and simpler than even the credit card… Within seconds, the transaction is complete and money has flowed from one node in the network to another. The power of such fluid networks is that, with minimal cost in time and money (most were $10 contributions) to individuals, enormous resources can be mobilized.

Why Journals are the Dinosaurs of Academia

In the age of the printing press, journals were, by far, the most efficient and enduring form of communication.  They enabled disciplines to have thoughtful conversations spanning decades and continents… [Today,] print media remain firmly entrenched, retaining all their symbolic significance, while lacking any of their earlier practical import… the privileging of the print over the digital, in fact, has the opposite effect than was originally intended.  Instead of facilitating the rapid dissemination of ideas, it hinders it. Print is a solid, heavy medium (as Bauman explains); it travels slowly and is expensive to reproduce. Digital information is liquid and light; it travels instantaneously and is free to reproduce.

Zygmunt Bauman has famously conceptualized modern society as increasingly “liquid.” Information, objects, people and even places can more easily flow around time and space. Old “solid” structures are melting away in favor of faster and more nimble fluids… WikiLeaks is a prime example of this… digitality and Internet… create information that is more liquid and leak-able and have also allowed WikiLeaks to become highly liquid itself. It is not just one website, but also flows throughout the web on its many “mirror” sites. The data is disseminated over peer-to-peer (P2P) networks making it truly “the new Napster.” And just as shutting down Napster did not end music-sharing, shutting down WikiLeaks will not end the sharing of classified information.

What are the consequences of this new politics of liquidity? …old, heavy structures need to become more porous else they will be washed away in the wave of liquidity. Assange’s strategy is exactly to make the U.S. government more secretive and therefore less porous. Thus, the government will be less effective at communicating both internally and diplomatically with others – what Assange calls the “secrecy tax.”

Historically, leaks are the product of activism within an institution (e.g., Daniel Ellsberg‘s famous leak of the Pentagon Papers). Anonymous is demonstrating, however, that in the highly liquid world of digital information, leaks no longer need to be pushed from within, but can be pulled from without.  That is to say, institutional outsiders can target the secret documents of an organization and reveal them to the public…  The question raised by Anonymous’ activities is whether—in light of the knowledge that it is more difficult than ever to control the flows of information—institutions will be compelled to change/reform their behavior.  Is enforced transparency an effective remedy to the ills created by institutionally-consolidated power structures?

“Heavy” structures need to become more porous; that is, allow for some amount of liquidity in order to withstand the torrent of contemporary fluidity… Too solid, the structure of the Egyptian government was even less prepared to withstand the rising tide of a liquid generation. Shutting down the Internet did not slow protests, but enflamed them. Unable to bend, the structure was largely washed away.

Governments across the globe are being faced with a decision: to further solidify or become more porous. On one hand, a government that cannot provide flowing digital information in today’s liquid world looks immediately repressive. On the other, allowing the free flow of information might foster dissent…

The rapid spread of… strategies of protest and dissidence, discourses of political claim-making, ideas regarding what is desirable and how one might get there… is due in large part to the technologies and social networks that enable the rapid spread of everything else… the wave of protest spreading through the Middle East is the result.

15 years ago, [we] lived in a world where the concern was of being watched with the fear of others seeing us. Now many fear not being seen; the concern now isn’t if people know what I’m doing, but the worry that no one cares. As Bauman states in Liquid Surveillance, “the fear of disclosure has been stifled by the joy of being noticed” (23).

Critical theorists have long argued that we literally consume identity through the things that we buy and the media that we ingest. Indeed, Zygmunt Bauman describes a viscous cycle of consuming and trashing identities in a breathless and fruitless attempt to avoid being left behind. Digital commerce, and mobile-based purchasing in particular, holds the potential to amplify this connection. Not only do we display our identities through the products of our consumption, but announce these purchases, increasingly seamlessly (or “frictionlessly”) to our social networks… Increasingly, our purchases will integrate into the curated content of our prosumed profiled selves, which act as both projector and mirror, affecting how others see us, how we see ourselves, and how act and interact in light of this projected/reflected image.

The Panopticon wrongly understands everyday people as prisoners with too restricted freedom when it is precisely such freedom that is often leveraged for social control… the Frankfurt School and other critics of the consumer society – especially Bauman’s critique that also takes the prisoner’s gaze to be more important than the panoptic metaphor allows, himself positing the “Synopticon” that describes social control of the many watching the few cultural gatekeepers; the act of looking can modify behavior as deeply as being seen. As such, many have concluded that we should forget the Panopticon as a useful metaphor for understand surveillance in a digital age.

In Liquid Surveillance, the theorist of liquidity, Zygmunt Bauman, and the perhaps the preeminent theorist of surveillance, David Lyon, apply their unique perspectives to social media.

Bauman specifically argues that privacy, the foremost invention of modernity, had invaded and conquered public realm, and has now, as a consequence of the Web, begun to fall… [He] states that “we see no joy in having secrets” which might be exactly wrong; instead, it might also be the case that as secrets become more scare they simultaneously become more valuable.

The authors push for a post-panoptic understanding of surveillance that does not forget the Panopticon, just understands it as only part of the overall field… if the Panopticon was the few watching the many, the guards watching the prisoners, the authors also bring in the Synopticon, where the many watch the few… Applied to sites like Facebook, what this discussion begs for is an analysis of how the many watch the many on social media… what George Ritzer and I have called “omnioptic”… not only an increasingly powerful form of surveillance, but also the most liquid.

What I call “digital dualism”, indeed, a common starting point for theorists of the digital. Bauman makes this understanding of the Web most clear when he states, “our life (and to a growing degree as we move from older to younger generations) is split between two universes, ‘online’ and ‘offline’, and irreparably bicentered.” He states that “social life has already turned into an electronic life or cyberlife” (29; emphasis in the original)… he assumption made in this volume is that the offline is being traded for the on; meanwhile, research has shown that those using social media more also do more things away from the computer, precisely against the zero-sum assumption.