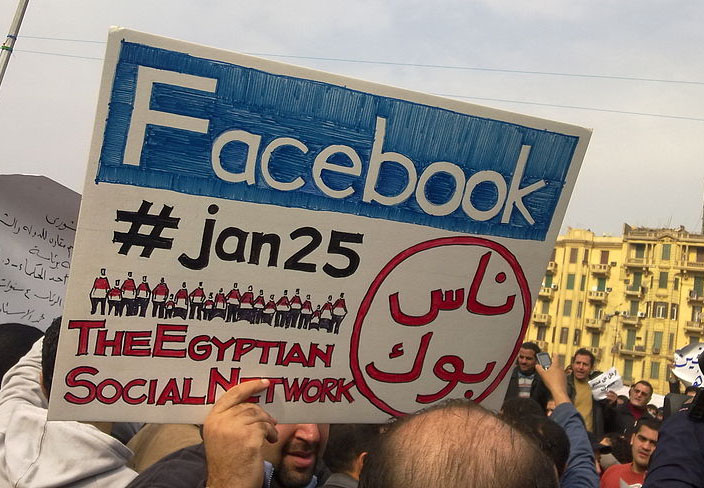 Given the recent events in the Middle East (and elsewhere, as protests continue in Wisconsin and ominous rumblings begin to issue from the direction of China) a great deal has been written in the past few weeks on the topic of social media and social movements/revolutions. Some of it has been a bit frothy, while much of it—including this, this, and this commentary on the Cyborgology blog—has been very insightful. However, while commentators have come at this issue from various angles, there hasn’t yet been much in the way of writing that seeks to wed an analysis of these forms of social action with existing theories of social movements and contentious politics.

The speed at which events have moved is a point on which a number of people have remarked. The wave of political anger expressed as protest that spread from Tunisia to Egypt, Yemen, Libya, Bahrain, and points beyond has been likened to dominoes falling—or, and this is more appropriate to the point I want to make, to the spread of a contagious disease. Democracy, it has been said, has “gone viral”.

In a sense, this is exactly what has happened. Strategies of protest and dissidence, discourses of political claim-making (“repertoires of contention”, to use Charles Tilly’s phrase), ideas regarding what is desirable and how one might get there—in other words, “logics of appropriateness” as regards political protest.  The rapid spread of these is due in large part to the technologies and social networks that enable the rapid spread of everything else (as discussed on this blog by Nathan Jurgenson in his writing on liquid modernity); the wave of protest spreading through the Middle East is the result. I want to favor the rapidity of the wave over the existence of the wave itself—The “wave” itself has a pre-existing place in theory; the idea of an international “demonstration effect” is not a new one in the more political realms of social science. In her book, States and Social Revolutions (1979), political sociologist Theda Skocpol emphasized the importance of positioning a social revolution within a wider international context as a key to understanding how it came about.

Skocpol was speaking primarily of the pressure involved in inter-state warfare, but she also allows for the possibility that a revolution in one nation might—if the arrangement of other factors is conducive—help to spark a revolution in another, simply by virtue of dissidents in one nation observing and learning from what has happened in the other. The Russian Revolution, she says, may have helped to bring about the one that occurred in China.

It is impossible to look at the events in Tunisia, Egypt, and other nations and not see parallels—Tunisia was identified by protesters in Egypt, Yemen, Bahrain, and elsewhere as the model by which they were operating, and the event that helped spark their own action. The difference between what has occurred in these countries and what Skocpol describes is, again, the speed at which it has occurred. News and information spread more rapidly now than ever before, and it is arguably more difficult to control the dissemination of the same (though repressive regimes are always finding new ways). Journalists and pundits talk about a “Twitter Revolution” in relation to the ways in which social media supposedly helps political dissidents to coordinate their actions on the ground, but too often coordination (for which the evidence is still less than more simple but arguably more powerful element of spreading and sharing information and discourse—again, repertoires of contention. The protests in Tunisia were seen by other potential activists as both effective—a leader was removed from power—and legitimate—there was widespread international support for the protests. They were able to see all of this, and to exchange news and information with other dissidents across borders, because of the Internet, in general, and social media, in particular. This played an enormously important role in the identification of opportunities for action, and the form that the action took.

If there is a “Twitter Revolution”, therefore, a vital component of it must be the ways in which social media enable visibility; not coordination, then, but the broader category of communication. “The whole world is watching” has never been more literal a truth than it is now, and that world’s polypresent gaze has never presented a greater threat to autocratic regimes. When analyzing this intersection of technology and political activism, it is vital to recognize that what we are seeing is not a new phenomenon in contentious politics, but a new variant of an old thing.

Indeed. I like very much the use of the concept of Visibility. There is also a certain role to be played from a concept of Solidarity as well, particularly thanks to the media presence of these revolutions in the western world. It allowed people to connect on a more personal level with the struggle of another people far removed from them in a rather immediate way, arguably increasing the legitimacy given to these revolutions by western governments.

The scale and infrastructure of modern communications technology seems to be having an increasing effect of collective action not through collaboration, as you point out, but more through these concepts of visibility and support.

[...] consequences. Theda Skocpol argues that social movements spread through visibility and modeling (see Sarah Wanenchak’s excellent discussion of this on Cyborgology). Just as the nations of the Arab world took cues from each other, the U.S. has now taken cues from [...]

[...] consequences. Theda Skocpol argues that social movements spread through visibility and modeling (see Sarah Wanenchak’s excellent discussion of this on Cyborgology). Just as the nations of the Arab world took cues from each other, the U.S. has now taken cues from [...]

[...] they disagreed about the appropriate methods for showing this support. This disagreement highlights debates about political activism in the face of new technologies and brings us back to the question: Does slacktivism matter? I will argue here, as I have argued [...]