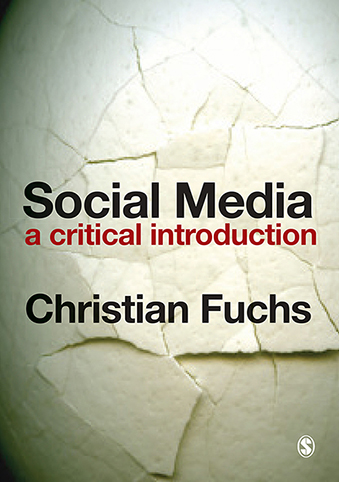 Generally, I’m not a big fan of textbooks. The bold words and broadly glossed-over content beg for flash-card style teaching. Because of this, I always opt for edited volumes and peer-reviewed journal articles, sprinkled with blog posts and popular media clips. Fuchs Social Media: A Critical Introduction, however, is not your typical text book. Rather than a corpus of definitions, the book is at once a review of the field, an argument about how scholars should approach the field, and a biting critique of the social media landscape.

As indicated by the title, Fuchs’ work examines social media from a critical perspective. Critical, for Fuchs, refers explicitly to Marxism and neo-Marxism, with power and resource distribution the key focal points. A Marxist take on social media examines exploitation and domination by studying both political economy and political communication of social media. That is, a critical perspective looks at who owns the means of production in both the financial and attention economies, and how various media perpetuate, reflect, or potentially upend, an inherently exploitative capitalism.

Early in the book, Fuchs makes an effort to differentiate this perspective from other uses of the term “critical,” and to distance this work from non-Marxist scholarship. Reminiscent of a debate summarized by PJ Rey, Fuchs explicates this distinction:

When discussing the question “What does it mean to be critical?” with academic colleagues, many have the immediate reaction: we are all critical because we ask critical questions and criticize the work of our academic colleagues. Scholars who characterize themselves as critical thinkers or critical theorists often question these claims. They emphasize “critical” and the need for being critical in order to stress that in their view not everyone is critical and that a lot of thought (academic or not) is uncritical. Their basic argument is that not all questions really matter to the same extent for society and those whom they call uncritical or administrative researchers often focus on questions and research that is irrelevant, or even harmful, for improving society in such a way that all can benefit. They are concerned with questions of power…It makes a difference whether one asks questions about society with a concern for power or not…such questions are not uncommon, but rather quite typical.

With a critical framework, Fuchs tackles many of the Big Questions within social media studies, including the reality of participatory democracy, exploitation and surveillance on social network sites, the costs and benefits of “free” services, and potentials for alternative (read: non-capitalist) media.

I highlight some key themes below, discuss how to best implement this book as a scholar and/or teacher, and finish with a full index of chapter titles.

Fuchs devotes the better part of chapter 8 to a discussion of Twitter as a public sphere. Evoking Habermas, Fuchs notes the two necessary components of a public sphere: political communication (equality of voice) and political economy (equal access to resources). He summarizes the key debates through the work of Clay Shirky, Evgeny Morozov, Malcom Gladwell, Jodi Dean, and Zizi Papacharissi. In short, he contends that Shirky and Papacharissi advance social media as tools of a public sphere, while Morozov, Gladwell, and Dean, argue that “slacktivism” displaces “real” political action, reinforcing the status quo while quelling personal feelings of guilt.

Fuchs sympathizes with the latter view, rather than the former. He engages in an empirical analysis of political communication and political economy on Twitter, collected during the 2011 political revolutions. He shows that while social media can be a tool of the masses, asymmetrical visibility persists, and favors corporations and powerful political figures. Twitter is, therefore not, Fuchs concludes, a public sphere.

Fuchs touches on exploitation in several places throughout the work. Exploitation is the use of others’ labor, for which the laborer is not paid, to produce profit for the capitalist (i.e., the owner of the means of production).

In addition to critiquing Jenkins’ participatory democracy stance, Fuchs takes issue with Jenkins’ ideas on social media exploitation. Jenkins argues that although users provide free labor, they too benefit socially and emotionally, and are therefore not exploited for this labor. Fuchs reminds us that the definition of exploitation is the creation of surplus value based on someone else’s labor. The creation of this value—whether enjoyable or not—is nonetheless exploitative. Importantly, Jenkins’ logic decenters money as the key token of exchange, and Fuchs argues that this decentering misrepresents the logic and reality of capitalism.

Building on Dallas Smythe (1981), Fuchs argues instead that prosumers are sold as commodities to targeted advertisers. In addition, these prosumers generate free labor by providing content that draw other users. Each of these activities increase the relative surplus value (as opposed to absolute surplus value, created by extending unpaid working hours) (Marx 1867), in that the tools of exploitation become more efficient, with laborers creating more profit in the same amount of time. Targeted advertising, for instance, allows multiple advertisements to appear at once, optimizing the chance of converting ads into sales. Similarly, prosumers at once consume the site, increasing the amount of money platforms can charge for advertisements, while simultaneously producing the goods that keep the site running.

It is in this vein that Fuchs makes one of my favorite observations in the book: The lack of a “dislike” button on Facebook has less to do with creating a positive culture, and more to do with preventing users from “disliking” a good or service paying for advertising space on the site.

In addition to user exploitation, Fuchs notes the slave-like labor necessary for the production of technological goods. In this vein, he lays out the key players in the exploitation game: The knowledge worker elite (software engineers), the regular workers, the slave-labor, and the prosumers.

Fuchs says that to analyze privacy, we have to look at “privacy for whom?” (Didn’t Nathan Jurgenson just write something about that?). Fuchs argues that current implementations of privacy rights disproportionately favor financial privacy of the elite, while exploiting (literally) individual privacy. He argues that privacy analyses that focus on individual user practices, and which promote more careful privacy decisions at the individual level are misguided.

Sharing information is an important way of asserting the self, he argues, and as we’ve argued on Cyborgology, there are tangible costs of opting out.  As such, Fuchs argues that the onus of privacy maintenance should be placed upon those who own the means of communicative production (e.g., Facebook Inc.).

Fuchs usefully differentiates between surveillance and transparency, discussing WikiLeaks as an example. Surveillance refers to control of the powerful, over those with less power, through the practice of watching from an obscured position. Transparency, on the other hand, is the forced openness of powerful agents—usually politicians, political bodies, and corporate actors. Surveilled data is holed away, while data gleaned through transparency efforts are projected publicly.

WikiLeaks, argues Fuchs, is a tool of transparency, while Facebook’s collection of user data, distributed in unclear ways to advertisers, is surveillance.

Fuchs final few chapters analyze existing tools of potential socialist and communist expression. First, he questions if WikiLeaks is an “alternative” media, which he defines as necessarily critical. He argues that WikiLeaks is alternative only in a limited sense, but has the potential to become truly critical. It is limited first by its reliance on liberal ideologies (i.e., general mistrust of governing forces) that undergird many of the problems against which it fights. It is further limited by its reliance on mainstream news outlets. Additionally, it is limited by an overemphasis on government corruption, failing to fully address the connection between corporations and government forces. Finally, Fuchs contends that WikiLeaks’ critique of corporations does not go far enough. Julian Assange works to “civilize” unruly corporations, rather than attacking a capitalist system in which exploitation is built-in.

Fuchs ends on a hopeful note, delineating techniques for a commons-based, communist, Internet. He notes, however, that a communist Internet is impossible within a capitalist society. Rather, he argues, we should focus obtaining a communist society, in which information can be created and distributed communally. Creating communist technologies, he argues, is an important tool in this process.

How to Use This Book

Fuchs work in this text is useful in several regards. First, he gives a clear and accessible account of Marxist and neo-Marxist theory. Regardless of the social media focus, his first chapter could well be used in an upper level undergraduate theory course as an introduction to Marxism. As a take on social media, this is great to include as one reading, among others, in an undergraduate course.

The reason I emphasize one, among others, is that Fuchs’ critical standpoint is so definitive, and his critiques of other scholars/scholarship so biting, that students deserve and indeed, should, read those with whom Fuchs disagrees to obtain a more nuanced understanding of their varied arguments. Although I think this work is overall fantastic and very useful, my main critique is Fuchs’ unforgiving, and at times oversimplified dismissal of scholars and scholarship that does not align with his perspective. Of course the political economy of any phenomena—social media included—is deeply important. However, there are other questions of interest, and these questions are valuable in their own right, and in conjunction with power analyses. A reader well versed in the field can make sense of Fuchs’ critiques with their own arsenal of knowledge, adding grains of salt when necessary. Similarly, the well versed scholar can incorporate Fuchs’ critical arguments into their own work, supplementing other kinds of research questions.  Novices, however, will need help in both regards.

Within a graduate class, this would be a great text, to be assigned one week, to introduce the role of critical theory in new media studies. Finally, for social media scholars, some of whom may be less familiar with the critical theory paradigm, this is a great weekend read, one that condenses several debates into a single textual space and acts as a useful primer for reading both critical and “non-critical” works.

1: What is a Critical Introduction to Social Media?

2: What is Social Media?

5: The Power and Political Economy of Social Media

9: WikiLeaks: Can We Make Power Transparent?

10: Wikipedia: A New Democratic Form of Collaborative Work and Production?

[…] As indicated by the title, Fuchs’ work examines social media from a critical perspective. Critical, for Fuchs, refers explicitly to Marxism and neo-Marxism, with power and resource distribution the key focal points. A Marxist take on social media examines exploitation and domination by studying both political economy and political communication of social media. That is, a critical perspective looks at who owns the means of production in both the financial and attention economies, and how various media perpetuate, reflect, or potentially upend, an inherently exploitative capitalism.  […]

[…] to The Society Pages for a brief summary of Fuch’s book, which helped complete this […]