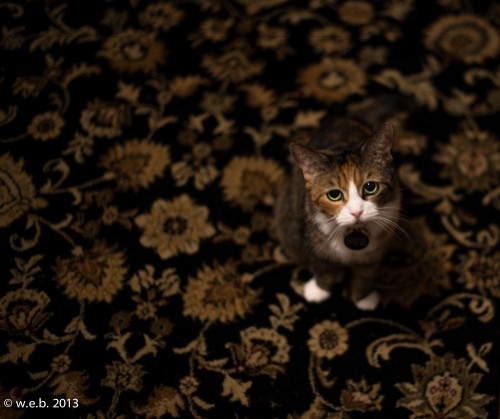 There’s a song from the musical Avenue Q that famously proclaims, “The Internet is For Porn”—but really, anyone who’s been paying attention to the post-“Web 2.0” era knows that isn’t true.

These days, the Internet is for cats.

Furthermore, I propose this corollary: Smartphones are for documenting cats. Whether through T. gondii or through their unrivaled documentability, cats actually rule the world. Cat people know this, and anyone who’s ever spent time with cats knows that cats know this. Rewrite the song: The Internet is For Cats.

My cat, however, is not a fan of the Internet. 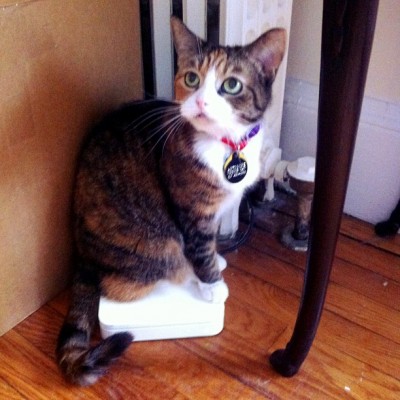 In a way, you can’t blame her; she’s older than the first patent filed with the name “Google Inc.” on it, which makes her somewhere between 75 and 81 in human years. Assuming both live through the end of 2016, she will even be older than my grandmother (and, as I mentioned in my very first post for Cyborgology, my grandmother and the Internet never really clicked). My cat likes the laptime that my computer- and Internet use affords her—Hey. [Pulls on sweatshirt.] Pet me. [Pull, pull.]—and she’s always thought my various laptops, modems, and wireless routers made perfectly fine cat warmers. But the Internet itself? Pfffft.

Yet if she’s getting some incidental perks out of my (stationary) Web use, my cat has no patience for the mobile Web. As in, none. Ever since I broke down and joined the People With Phones That Easily Surf the Web club in mid-2011, I have been insufferable. Not only does my smartphone make terrible sounds in the morning; I also reward its bad behavior by (eventually) picking it up and giving it the full extent of my dim attention—even though everyone knows that my first waking moments are for cat-petting. Hey. [Rubs cheek on phone, purr, purr.] Stop it. [Nudges phone-hand with head, purr, purr.] You’re doing it wrong. Live in the moment. [Rubs cheek on phone, manages to activate touchscreen, feigns cluelessness, purr, purr.] The smartphone is an interloper, a usurper, an unjust recipient of contact with my fingers and palms. The desktop and laptop may be large, vulnerable only through their keyboards, but the smartphone is a less formidable adversary; in fact, it is more like a small glowing rat. The indignity! Die, verminous screen, die. 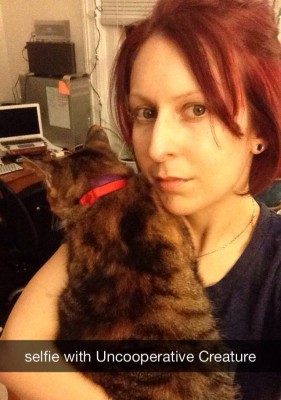 As if this affront to her person (and to our long-standing relationship) isn’t enough, I also have the gall to keep pointing that infernal screen-object right at her. Hello, my name is Whitney, and I have a problem: I overdocument my cat. And she hates it. My cat is loathe to have her picture taken; she emphatically turns away from any kind of lens (especially the phone lens), and will not look anywhere near an image-capturing device unless she’s tricked into it. Perhaps it’s that I didn’t acclimate her enough as a kitten; my SLR had been stolen not too long before she came to live with me, and the rare early photos of her were taken on disposable cameras. I eventually got a digital camera, but I used it more for travels and events[i]; around the house, my getting up to get the camera would inevitably trigger movement from the cat and thus ruin the shot.

My smartphone, however, is usually at hand, and it even takes fairly decent snapshots. More than that, my smartphone affords a wide range of cat documentation possibilities: I can save cat photos to my phone as is, or I can do light processing on them right then and there. I can send cat photos to my friends (and to my mom) via email or SMS; I can also post cat photos to Instagram[ii], or sometimes to Facebook. Even better, I can use Snapchat to take snaps of my cat, and then send the snaps to friends and/or post them to my Story and/or save them to my phone[iii]. The cat, however, doesn’t much care whether I’m photographing her or snapping her; she just does not want that thing pointed at her at all. The Commemorative Group Selfie has arguably become an important digital-era gesture of friendship, kinship, or even love, but she won’t do those with me, either. I try pretty regularly, but no: the cat steadfastly resists documentation. Far as she’s concerned, the Internet, digital photographs, and especially smartphones can all go to hell.

In short, my cat would make a great digital dualist[iv]—and yet, she somehow got stuck with me for her human. Awwww.

I realized last night, however, that my incorrigible Cat Overdocumentation Habit isn’t merely the by-product of a phone full of affordances and a Web that rewards cat pics with attention. Yes, it’s been easier to document my cat ever since I started spending most of my time sitting on a serviceable camera, but something else happened in mid-2011: My cat turned 12. Later, in the fall, a combination of living in only one place (which was rare during my California years) and being well into grad school meant that—for the first time in over a decade—I spent almost all of almost every day working from home, rather than from somewhere else. My cat, in turn, spent almost all of that time either in my lap or somewhere else in my office. And I, in turn again, spent a lot of time thinking about how much I enjoy her company, how much I love her, and how she will only continue to get older…until someday, she won’t. And that someday will probably be sooner, rather than later. 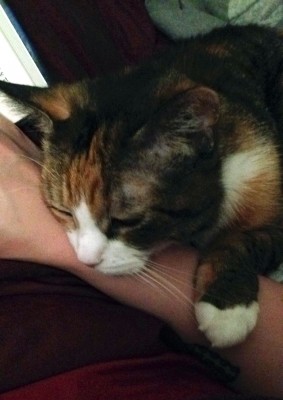 I overdocument my cat because it’s (sort of) easy; because I love her; because she’s pretty and the Internet rewards me with Attention Points™ for doing so. But I also overdocument my cat because I simultaneously accept and dread her mortality. I take too many pictures now because I can, and because I know that, eventually, I won’t be able to take any. I overdocument my cat, and then with each new health scare I really overdocument my cat—as if by preserving so many images of her, I can somehow preserve the creature herself. This time I even cracked and got her on Facebook; though in part my doing so came from a desire to share pictures with everyone who’s cared about her over the years, I think it also came from a lot of thinking about Death in the Time of Social Media. There’s a reason we cling to profiles of the dead; in some small way, dead profiles represent lingering pieces of lives, pieces that will never decompose (even if their host platforms can take them away from us at any moment). A cat’s profile may be less a part of her than a human’s profile is of its person (my cat rarely makes her own status updates, for instance), but it is still something, and right now all the somethings feel better than nothing.

Conventional wisdom is that we take photographs primarily of things we want to remember; Nathan wrote recently about how, in the context of social media, photographs are things more often of communication than of memory (I’ll finish my response to that post any day now, for real). I’m realizing, though, that—at least for me, at least right now—there’s something else going on both with photographs and with why I engage in photography. Yes, I will be glad for these pictures years down the line, even though I will not need them to remember what my cat looked like; yes, oftentimes pictures of my cat get used in my communications, or as communications in their own right. In the back of my mind though, in the place where magical thinking lives, I’m not just trying to share a moment or to freeze a moment in time; I’m actively trying to prevent time’s progression, trying to anchor and pin down the present so that it cannot slide into the future. I’m trying to counter a looming No Longer with the force of an undeniable Has Been, trying to effect metaphysical alchemy through nothing more than two thumbs and a touchscreen. Overdocumenting my cat has become a ritual not just in the sense of being a habit, but also in the sense of trying to perform magic. 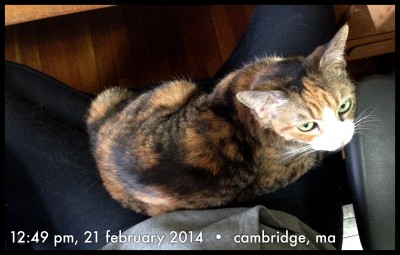 I’d say more, but someone’s reminding me that I should pet her—and I will, just as soon as I take (yet another) photo to use at the end of this post. Sorry, love. (See above.)

All photos by the author.

[i] I also took a lot of selfies, because the lens turned around backwards and made it easy—but that was way before they were called “selfies.”

[ii] Before my Instagram account became primarily a way to keep track of the shows I go to, my feed was pretty much 50% travel photos and 50% cat photos. Yeah, it’s like that.

[iii] Yeah, saving your snaps is sort of not in the spirit of Snapchat, but I make an exception for cat photos. Geriatric cat is geriatric.

[iv] For even more digital-dualist cred, my cat is from a shelter right at the base of Cape Cod—though I do not know if she has ever been to the beach.

[…] biased as a dog blog, but we want to be balanced as well. So here’s Whitney Erin Boesel, who waxes philosophical about her best feline friend: I overdocument my cat because it’s (sort of) easy; because I love […]