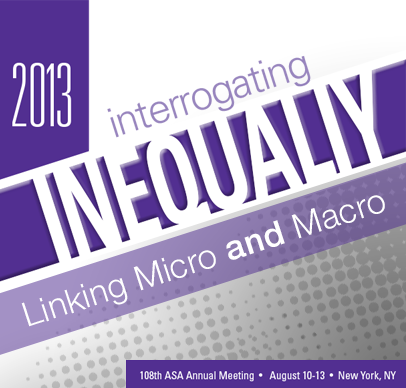 During the 2013 Annual Meeting of the American Sociological Association (#ASA13) in New York this last week, I was reminded of the post that I wrote last year before #ASA2012 in which I encouraged tweeting academics to reach out to non-tweeting academics to bridge the gap between those who participate on the conference hashtags at ASA and those who don’t. Nathan Jurgenson (@nathanjurgenson) followed up with a post titled, “Twitter isn’t a Backchannel,” in which he made the point that the term “backchannel” perpetuates digital dualist ideas of what does and doesn’t count as “real” participation at a conference:

There is no “backchannel”, there is no more or less “real” way to exist within this atmosphere of information, yet we continue to hear that the Twitter distraction whisks people away from the “real” conference in favor of something separate and “virtual.” Each time we say “real” or “IRL” (“in real life”) to mean offline, we reify the digital dualist myth of a separate digital layer “out there” in some ‘cyber’ space. And when we call Twitter a “backchannel” to mean a separate conversation, running tangent to the offline conference in some space behind precious face-to-face exchanges, we continue to support this digital dualism. The implicit, and incorrect, assumption is that the on and offline are zero-sum, that being offline means being not online, and vice versa.

In the comments, I agreed that Nathan had a point: “backchannel” really isn’t a great term for what we-who-livetweet do when we tweet at a conference. But what, I asked, should we call this activity? Neither Nathan nor I had an answer at the time, and I was still looking for a term when I wrote my ASA 2012 wrap-up post. But sometime in between post-ASA 2012 and when the Theorizing the Web planning committee was getting together to plan #TtW13, I’d come to a conclusion—and was solidly of an opinion that we should call the people moderating hashtag discussions for the TtW sessions “hashtag moderators” rather than “backchannel moderators” (which we did; needless to say, the term change was not a hard sell).

Revisiting my old post this week (and wincing a little for each use of the word “backchannel”) reminded me, however, that I never got around to posting about my proposed (and now, adopted) term change, so here we go: If we want to talk about that thing that happens when people who are in-room and people who are elsewhere use Twitter to have a conversation about a talk, a presentation, or some other event, that thing isn’t a backchannel; it’s a hashtag stream.

Again: It is not a backchannel; it is a hashtag stream.

You are not a backchannel moderator; you are a hashtag moderator.

You are not backchanneling; you are participating on the hashtag (possibly by livetweeting).

Granted, “participating on the hashtag” is more of a mouthful than “backchanneling”—so perhaps we could shorten this to “hashtagging,” and understand that term to mean “participating on the conference hashtag” in the context of a conference; alternatively, if we’re going to rely on context in that way, perhaps we could simply say “tweeting.” (I’m interested to hear people’s thoughts on this.) But there you have it: some workable language for talking about using Twitter at academic conferences. We need not denigrate hashtag participation as “backchanneling” again.

Other than that—on the topic of Twitter and ASA, and in the spirit of revisiting my post from last year—is there anything else I want to add, now that I’ve been to two ASA meetings instead of none? I have a few thoughts:

1.) This year’s ASA felt off to me, in a way that I couldn’t quite put my finger on. Perhaps it was because the conference started on a Saturday and ended on a Tuesday, which meant that there were more people around for the first half than for the second half, which in turn created a sense that momentum was dwindling rather than building; perhaps it was the number of people I know who weren’t able to make it this year (or who only stayed for a day or two), in part because staying in New York can be so expensive; perhaps it was the number of scheduling conflicts for CITASA sessions & other sessions CITASA folks were likely to find interesting (CITASA is the Communication and Information Technology section of the American Sociological Association). But in any case, the Internet-studies “scene” felt far less cohesive and energized at #ASA13 than it did last year at #ASA2012 in Denver. Unsurprisingly (at least, to me)—because again, Twitter isn’t a “backchannel”—the listlessness this year manifested across in-room experiences, the session hashtags, and the general conference hashtag. Rooms for many of the Internet-related sessions were strangely empty (a thematic session titled, “Studying Social Dynamics in the Digital Age” was the most obvious exception, though for some unfathomable reason it was scheduled at the same time as a CITASA “Open Topic on Communication, Technology, and Society” session panel), and tweets about Internet-related sessions seemed to make up a much smaller percentage of the general ASA stream this year than last. More often than not, I was one of fewer than three or four people tweeting on a session hashtag, and on at least one occasion, I was the only person tweeting on a session hashtag. At times, this felt strange to the point of being a little eerie.

2.) I did notice more people using session hashtags in addition to the regular conference hashtag this year, so that made me happy.

3.) Aside from one man (at the Media Sociology pre-conference), who stood next to where I was sitting and spent an entire presentation staring at some combination of me and Tweetdeck on my laptop screen, no one much seemed to care about the fact that I was livetweeting. I think I heard all of one snarky remark about Twitter during the whole of ASA13, and it wasn’t even interesting (or pointed) enough for me to remember it clearly. Though I’ve been told that “people tweeting during sessions” was A Big Deal even a few years ago, it mostly seems like a non-issue now; in fact, it seems like such a non-issue that even those of us who are into livetweeting at conferences couldn’t get all that excited about it this year. I seem to recall spending a lot of ASA2012 involved in fairly intense conversations on the session hashtags, but at ASA13, I more often than not felt like I was just taking public notes—which, while still a worthwhile pursuit, is not quite the same thing.

4.) The #ASA13 hashtag did considerably enhance my experience of ASA 2013, and I remain a committed enthusiast both of conference hashtags and of more fully augmented conferences (like Theorizing the Web). But I have to admit: if we’re going to talk about converting non-users of particular social media platforms, I’ve actually gotten far more people to start using Snapchat than I’ve gotten to start using Twitter. This is probably due mainly to saturation—aka, the fact that the majority of people I know who would use Twitter are already doing so, whereas the same is not true of using Snapchat—but this minor detail still strikes me as mildly amusing (especially since I myself initially resisted Snapchat). I do have a few friends who live-snap me their readings of things (much as some of us, grad students especially, sometimes livetweet our readings of things), but—for obvious reasons—I doubt that livesnapping will ever become much of a conference phenomenon; as a result, my Social Media Activism Score for the 2012-2013 conference season is probably pretty low. Alas.

What are your thoughts—about hashtag participation generally, or about ASA 2013 specifically?

With her new username, Whitney Erin Boesel (@weboesel) saved four characters per tweet for everyone who talked with her on #ASA13—but is still slightly thrown every time she checks her @-replies and sees people addressing her newest performance of self.

[...] at my job.” Its a familiar refrain that I hear at lots of small conferences and, occasionally, on Twitter backchannels. Its an amazing compliment to hear that your weak tie with someone means so much, but its also an [...]