Occupy, Space, and the Symbolic Power of a Tent 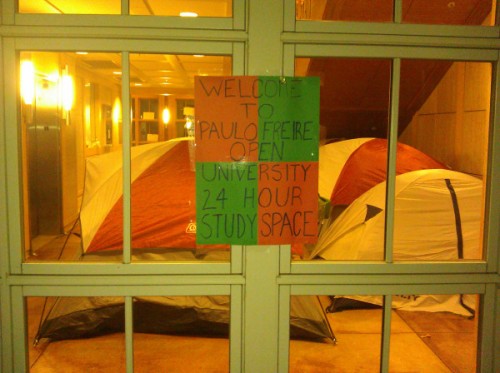 When the occupiers in Zuccotti Park began setting up tents, it was an inherently practical move. After cold, uncomfortable nights on tarps and huddled into sleeping bags (a situation imposed by a no-tent policy in the park, which was eventually not enforced), tents were a welcome way to make an occupied space more of a home, and closer to familiar conceptions of an established community.

But we need to understand tents as more than just tents.

The image above is from UC Davis, where (at the time of this writing) students had established an occupation inside one of the university’s buildings. The establishment of an encampment indoors is a significant one, for two reasons. First, on which I will touch only briefly here (but in more detail in the future), is that the move from “public” space into space more directly and concretely claimed/controlled/maintained by the university brings the physical fact of the encampment into a more directly adversarial relationship with the body against which the UC Occupy contingent is primarily protesting in this case (the UC system itself). It is not only important that space is being occupied, but what space is being occupied, and how.

Which leads me to my second point, and the one on which I want to focus here: Occupy encampments are not only physical centers and anchorpoints for the larger Occupy movement, but are also both implicitly and explicitly physical embodiments of a particular set of ideological claims.

What is particularly telling about the image from UC Davis is that the occupation is already inside. Comfort and protection from the elements is supposedly no longer an issue, and the practical reasons to have tents have largely disappeared. One could make an argument for tents still being useful for the privacy of occupiers and the protection of their own patches of physical space, but the point is still a significant one. There is something about the tents themselves that is symbolically powerful. The tents represent claims, demands, and arguments that have the capacity to be both specific and flexible enough to accommodate a diversity of positions.

Tents are useful in this way even when physical space is unavailable. When occupiers at UC Berkeley were prevented from setting up their tents, they “pitched” them in the air using balloons: 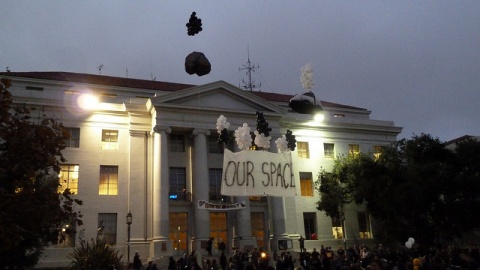 The image of flying tents is spectacular in every important sense: it is an image that is crafted to be remarkable, to be seen. The image of the tent and its physical presence have become part of the larger set of symbols, phrases, chants, and other discursive elements that Occupy has been so extremely good at producing. This can even be traced back to Occupy’s earliest symbolic roots. One of Adbuster’s Occupy Wall Street images contained the explicit instruction: “Bring tent.” 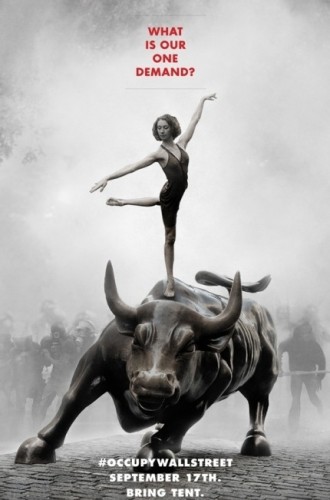 The tents themselves matter, and they are not just tents; they are both their physicality and they are far more than that, both a claim on power and a spectacle to be viewed (in an environment of ambient documentation) by the powerful and powerless alike. They become a kind of totem, as well as a meme. Protesters in OccupyLA linked arms and stood against police to protect the last remaining tent in their encampment: 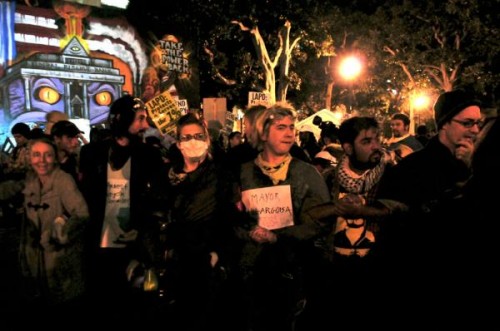 Interestingly, this suggests that tents as an element of symbolic discourse could very possibly have usefulness and staying power beyond the existence of the encampments themselves. If Occupy continues to evolve and emerge in new forms, it will be interesting to see where and how the tent-as-symbol appears next.

Awesome post Sarah. Check out this photo on SOCY Images, which plays into your frame: http://thesocietypages.org/socimages/2011/12/06/on-camping-and-the-framing-of-occupy-movement-strategies/

[...] Sara Wanenchak discusses the symbolic power of the tent for the Occupy movement [...]

[...] While I clearly agree with Nathan that the physical permanence that tents represent has been what’s given Occupy a lot of its power, I think we can glean enough evidence from how things have proceeded so far to at least make an educated guess at an answer to his question. For me, the answer is yes: I expect that Occupy will survive the winter and emerge in spring, albeit – like a bear emerging from hibernation – perhaps in somewhat of a different shape. There are several reasons why I come down on this side of things. [...]

[...] isn’t a new point that I’m making; I’ve made elements of it before, regarding tents in Occupy and injured bodies in violent protest events. What this example serves to reinforce is the profound [...]