We Have Always Been Insincere 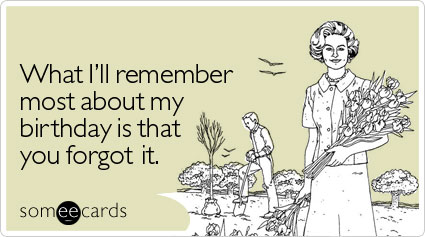 I was born on Jan. 31, but I’ve always wanted a summer birthday. I set my Facebook birthday for Monday, July 11. Then, after July 11, I reset it for Monday, July 25. Then I reset it again for Thursday, July 28. Facebook doesn’t verify your birthday, and doesn’t block you from commemorating it over and over again. If you were a true egomaniac, you could celebrate your Facebook birthday every day. (You say it’s your birthday? It’s my birthday too!)

Plotz’s Facebook wall was filled by well-wishers on all three of his “birthdays.” He writes,

My social network was clearly sick of me. I received only 71 birthday wishes on July 28, down from more than 100 on my first two fake birthdays. And even more skeptics caught on to the experiment: 16 doubters, compared with 9 from three days earlier.

He concludes that Facebook encourages its users to lead shallow lives in which we mindlessly send uniform birthday greetings in exchange for social capital. As Plotz puts it, “The wishes have all the true sentiment of a Christmas card from your bank.” Indeed,  I know many people who turn off their Facebook walls on their birthdays to prevent such insincerity. But the birthday has always been somewhat insincere. According to the Greeting Card Association of America, the greeting card industry is a $7.5 billion-a-year business, a quarter of which comes from birthday card sales. Their products are far from indivdually-crafted sentiments from the heart. For a few examples visit our fellow Society Pages blog Sociological Images. They have two great posts on birthday cards one that reinforces Jewish stereotypes, and another that is just plain sexist. about problematic representations of gender in father’s day cards as well as birth announcement cards. Just from those posts alone, I think Facebook does less to insult us than the greeting card industry.

But there’s still one more aspect of Plotz’s argument: Even if the birthday wish is sincere, how can it be meaningful if they say it on the wrong day? Obviously they don’t really know its my birthday. The assumption here, is that true friends and close family members have your birthday written down somewhere, and they go to the trouble of wishing you a happy birthday when it comes around. But your birthday is written down with a bunch of other friends and family members. For example, my 91-year-old grandmother sends birthday cards to all of her grandchildren and great-grandchildren. How does she do it? She has them all written down in a pocket day planner in her indecipherable handwriting. How is this day planner any different from the automated birthday list I have syndicated to my calendaring application? I didn’t sit down one afternoon in January and copy over my friends birthdays. A server did that for me. Its up to us to provide accurate information.

Perhaps Plotz experiment shows us the true nature of Facebook Narcissism It has nothing to do with online profile preening and self-aggrandizement. Rather, it has everything to do with a search for authenticity. Having an “authentic” and “sincere” social interaction with a loved one. An authenticity that won’t be found in the aisles of a Hallmark store or a someecards message. Its an authenticity that sits outside of the McDonaldization of holidays and special events.

Plotz really just demonstrates the basic principle that we have to assume people on Facebook are not constantly lying about themselves.

When someone (like him) is willfully deceiving people just to see what happens, it's no surprise that people fall for it. Our interactions are based around trust and the presumption of some degree of honesty from our close friends.

[...] This article was originally published on Cyborgology [...]

Are There More Public Apologies Than Ever Before? » Cyborgology — June 7, 2012

[...] tend to recognize insincere aspects of our society once they take a digital form. The superficial changes get mistaken for a new institution, when what [...]