It’s almost Father’s Day, which means it is time for the greeting card business to make tons of money. It also means it’s time for us to visually see the standard narrative about gender, masculinity, and fatherhood. Looking at mass commercial products like greeting cards is an especially useful venue: the greeting card companies, wanting to make money like good capitalists, will sell products that have the greatest widespread appeal. Thus, they will sell the most popular representations of gender, masculinity, and fatherhood.

From a brief perusal of a NYC chain store greeting card aisle, I found plenty of cards that shed light on these representations. I want to focus, though, on two: middle-aged masculinity and the different representations of daughters and sons.

There were plenty of cards like this one, that capture many of the stereotypical narratives about fatherhood, and middle-aged masculinity more broadly: 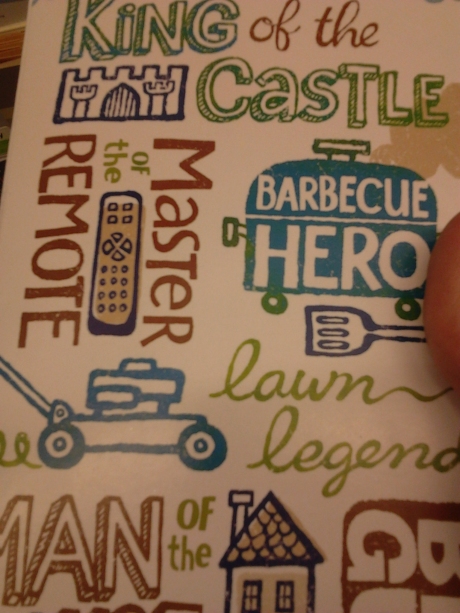 (Apologies for the poor picture quality, a nearby employee didn’t seem thrilled with my picture-taking).

Here, we see man/father as: head of the household (twice, and once as dictator – king): cooks, but only on the grill; lawn mowing expert; controller of the remote/TV watcher; and “big guy.” What’s not on there? Anything about love for children, caring, affection, equitable distribution of household duties (if part of a couple), etc.

Almost all of the love and affection, though, was saved for cards specifically marketed as ‘Dad from daughter.” Most of the cards in this picture were love-centric and labeled as such: 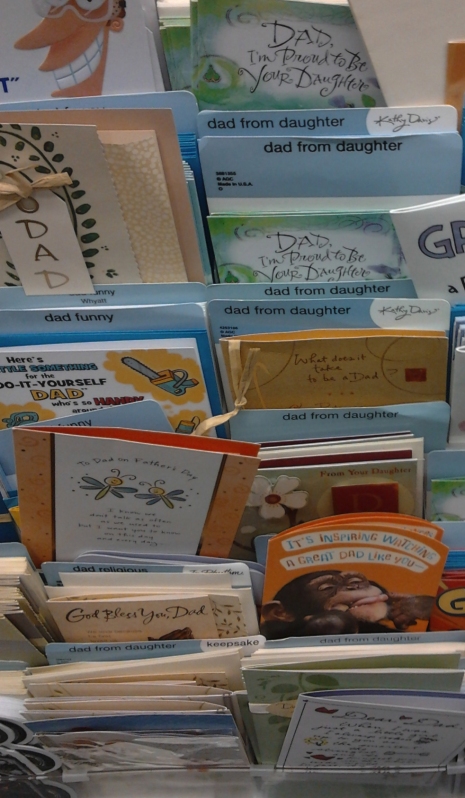 There were a few rare cards simply marked as ‘Dad’ that include themes of love and/or affection, such as this one: 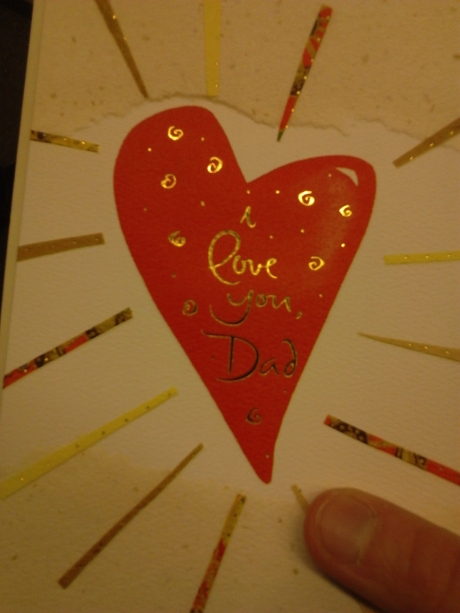 The cards marked ‘Dad from son,’ however, mostly consisted of attempts at humor involving sports (especially golf), building things (or the lack of ability to do so), and, well, farts: 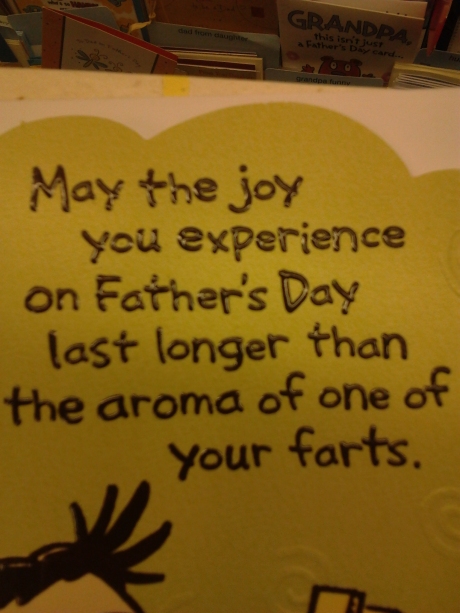 Obviously, we can’t draw too much from the greeting cards in one store, but in this store, at least, there was only one card explicitly marked for sons that primarily communicated feelings of love and affection; all of these were either marked for daughters to give or did not specify what gender should give them. Pairing this with the kinds of fatherly masculinity represented by the cards, Father’s Day cards are sold through the use of traditional gender representations.

John McMahon is a Ph.D. student in Political Science at the City University of New York Graduate Center, where he also participates in the Women’s Studies Certificate Program. He is interested in post-structuralism, issues relating to men and feminism, gendered practices in international relations, gender and political theory, and questions of American state identity. John blogs at Facile Gestures, where this post originally appeared.

Good post. One of the better I've seen in a while.

Someecards has a card making light of this.

My mother raised my brother and me on her own, so I consider this day as a celebration of the extra work and grief she had to go through. I've never seen anything which acknowledges this work of single mothers (on Father's day).

edited to make it clearer...

Thanks for the interesting post. The card I got for my father totally fell into the stereotypical Father's-Day-From-Son category. It was a picture of a father and son in front of a barbeque, with the father saying "Don't get your wiener to close to the fire, son" and on the inside it said "Thanks for always looking out for me." or something to that effect. After I purchased it, I had an urge to really communicate my feelings to him. So I wrote, "You really are an amazing dad. Thanks for always being there for me, no matter what." It was extremely difficult for me to stand there while he read the card, because sharing those feelings is hardly ever done between me and him (and I'm sure plenty of other fathers and sons). It may be a Hallmark holiday, but I did feel good getting those feelings out to him, if even in a stereotypical, overpriced card.

I make it a point to send my mother an extra flower bouquet plus a six-pack of Becks on this day of celebration. Considering the sperm donor did little to influence our lives, I commend my mother, queen of the castle, who implemented chores for her three children like mowing the lawn so she could go out and bring home the bacon, considered the remote unnecessary since we couldn't afford cable or, for that matter, to buy a TV, neglected any kingship of barbecue because the only form of meat we ever saw was chicken nuggets, made every single one of us kings of the castle, and generally did not tolerate burping or farting, no excuses. I love you, Mama, you are the best role model any young woman could ever wish for!

[...] Did you celebrate it with meat? Meat is very manly. Or perhaps you just purchased your father a very manly card, praising his manly familial-providing… ness. But seriously, thank you to all the fathers, mothers, parents, guardians, grandparents, mentors, [...]

The "I love you, Dad" card was one I got for my dad... I didn't think twice about it and I don't think he did either.

[...] of the Father’s Day landscape and should not surprise anyone.  Consider for example this quick survey of Father’s Day cards by John McMahon.  There is also the issue of the tie as the standard [...]