There is something so damn ironic about this pair of greeting cards photographed by Julie Becker from Lansing, Mich.   The cards, designed to congratulate new parents on the birth of their child, reveal a (perceived) desire to gender our infants from Day One. It is important to identify this child’s gender; it must be noted and color-coded that it is a “he” or a “she.” But the card company finds no irony in using exactly the same baby on each card: 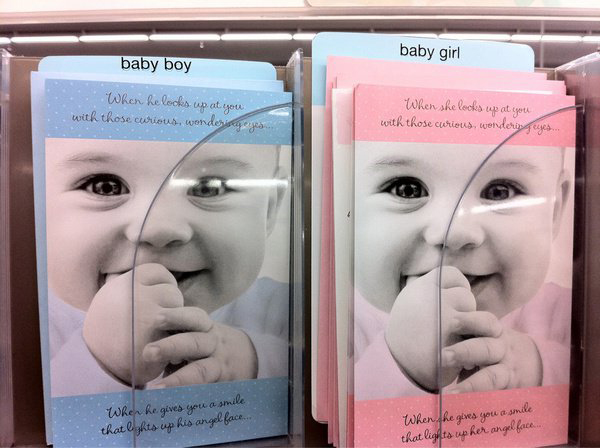 In fact, gendering infants is a rather new phenomenon in Western history and not cross-culturally consistent. Some cultures, and in Western culture previously, the sex of children was considered rather irrelevant until puberty.

Well, actually, we gender them even before they are born. We want to know if they're boys or girls while they're still in the womb, so we can buy blue or pink clothes, or paint their room accordingly.

Also notice how the eyes are clearly photoshopped to appear either more "feminine" or "masculine". Ie., the "girl" card seems to emphasize the infant's eyes, almost as if wearing makeup. (Maybe that is just me, though.) I also find the framing slightly different for each, as if either the "male" infant's face has been widened, or the "female" infant's face narrowed.

When my daughter was an infant, I was struck by how people would assume she was a boy if she wasn't wearing pink or using a pink blanket. I was less surprised then, when people assumed my boy was a girl for using his big sister's pink blankets/boots/etc.

As parents we can try to raise our kids without establishing gender-roles, but it comes at them from everywhere else from day one.

L.G. -- I agree, and was just signing in to comment that the "boy" infant's face IS widened -- because boys are big and hearty even in infancy, and girls are wee and delicate and eventually a size zero.

I'd hate for anyone to tell that to my niece, who was a big baby who crawled around tackling her petite boy cousin and stealing his bottle...

We had this issue with our nephews - they have big baby Afros, and it is assumed that they are girls, always. Since their blankets are neither pink nor blue, people are confused. We're not sure how much we're required to help them with this...!

I am expecting my first right now and refused to discover the baby's sex until birth specifically because I wanted to keep the gender stereotypes under control for as long as I could. I am not surprised but and still a bit shocked at the sheer number of people who think me crazy or even a bad mother for not finding this information out!

Just wait until I unapologetically put the baby in opposite gender clothes...

"Some cultures, and in Western culture previously, the sex of children was considered rather irrelevant until puberty."

What, you were'n't told you were a boy and would inherit the estate when you were 6yo?

You weren't taught needlework in the middleages if you were a 8yo girl?

C'mon. "rather irrelevant" has to only mean in comparison, and in terms of clothing.

Could Lisa (or someone else) possibly elaborate on when it was introduced into Western culture and which other current cultures do not exhibit the same behaviour? I'm not trying to criticize. I'm just genuinely curious.

I am a guy with brown curly hair that I usually cut pretty short to keep it manageable. However, when I was a toddler (up until about age 1-2) my hair was straw blond and wavy with big curls at the bottom because my parents kept me hair long since it looked nice. My dad to this day gets great joy from recounting the stories of hearing people comment on his lovely little girls' goldilocks hair.

If you look at the lighting and the reference points, I really think the picture was not altered and is EXACTLY the same. I find it somewhat comforting that the language on the card is also exactly the same.

I work retail and a lot of our customers have children of varying ages. As part of the job we typically have at least some contact with every kid that comes through our checkout line. Even aside from the fact that it's impossible for me personally to tell the gender of most little kids, I feel really sensitive, both politically and personally, to assigning them a gender, as a stranger. I think a big gap is gender neutral pronouns.

It's not a problem when the kids are old enough to talk to directly, but when they are preverbal and I need to ask, " does ___ need ____" or "hey, does your sibling want a sticker too?" I might normally use "they" as a nongendered singular pronoun with my friends, where that's common, or "ze" with my friends who really really are trying to change language, but those options just don't feel available with the public at large. Things like "your baby" might seem simple enough but end up sounding so awkward I often ending up going the extra mile towards "your smaller companion" just to make it... deliberate.

Do people feel me on this? Have you found other options? Do people agree that closing this gap in our language is necessary to evolve our concepts of gender?

I think it's interesting when parents get offended if you call their baby a "he" or "she" incorrectly. They get very defensive sometimes.

Great post! Lisa, if you or anyone else has some good academic references for the topic of gendering children (through history or by comparing cultures, etc.), please let me know - this is a topic I've been meaning to research for a while, so any leads are appreciated!

I also would like someone to do my research for me. I can give you Timtams if I like your work.

Here's a free one Lisa ;) And for those of you curious about gender roles for children in the 17th century

In fact, gendering infants is a rather new phenomenon in Western history and not cross-culturally consistent. Some cultures, and in Western culture previously, the sex of children was considered rather irrelevant until puberty.
"A rather new phenomenon" is somewhat imprecise. I study 18th century France, and while infants were not gendered - in the sense that until the age of 5-7 boys and girls were dressed and treated the same - there are at least two senses in which, at that point in time, the sex of a child was indeed considered relevant.

In the first, that of inheritance, birth order was as important a factor as gender, because under the system of primogeniture, while parents would care very much about having at least one son, any subsequent sons and any daughters couldn't inherit, and so after the birth of an heir, the sex of the other children mattered considerably less. (This of course applies only to property-owners - the king at the head of the list, since the Salic laws prevented daughters from inheriting the crown - and thus for the majority of the population, on this score at least, the sex of children would have been less important.)

In the second, from around age 5-7 distinctions in the way girls and boys were treated began to emerge. In families wealthy enough to afford to educate their children, boys were often sent to (all male) collèges, while girls would be taught at home or sent to (all female) convent schools, when they were educated at all. (There are, of course, exceptions to this. When parents brought in tutors for their children, there are cases where girls and boys education did not differ as drastically as one finds in general.) Among families were children were obliged to work (again, the vast majority of the population), there was division of labor along gender lines long before puberty and among artisans there were certain trades that were considered acceptable only for men and others only for women (apprenticeships tended to begin at ages (10-14) when, while our contemporaries would have - on average - already hit puberty, but when this was most often not the case in the period under discussion).

From my admittedly comparatively limited knowledge of the preceding periods, I think it's fair to say that most if not all of these phenomena were already at least several centuries old by the 18th century and generally existed not only in France but all over the "West".

i know the thread has gone to other topics, but i just wanted to mention that i find it hilarious when people tell me that my 7 month old son "just looks like a boy" or "you an just tell he is all boy" or a gem from my mom the other day while i was trying to get him dressed "boys just hate to get dressed!". mom, i am pretty sure every 7 month old, regardless of sex, hates to get dressed :)

unfortunately for us, no matter how hard we try to keep our child's toys gender neutral, family and friends have ruined it. for christmas, my son received a fisher price tool bench, countless cars, trains and other "boyish" items. for his first birthday, i expressed a wish to my husbands family for him to have a kitchen and they instead found a bbq set that they would rather purchase for him. i dread what will happen if our next child is a girl....

[...] reason I’m bringing this up is because Ed sent me this blog post the other day and it got me thinking about the whole gender game again. This is where my two worlds [...]

[...] March we posted a set of greeting cards: a pink and a blue one congratulating new parents on a girl and a blue respectively.  The cards [...]

Im going to go ahead ans guess its been said but not only the gener issues here but what about race? Is no more black babies being born?