Forward or Back on Voting Rights? A Research Compendium

In a democracy, the equal right to vote should be sacrosanct, but across the country many states are throwing up new obstacles to voting.

SSN experts probe why this is happening – and explain how constructive reforms could enlarge voter participation and insure the integrity of U.S. elections

In 2013, in Shelby v. Holder, a divided Supreme Court invalidated a section of the 1965 Voting Rights Act that had required states with a history of racial discrimination in voting to seek federal approval before making changes to their voting rules. Given a free hand, Texas, Mississippi, North Carolina and other states jumped to pass new rules that have the effect of making it harder for many minority and low-income citizens to vote. The impact will be felt immediately in those states, but the issue matters to Americans everywhere. As Yale University’s Marcus Anthony Hunter explained in the Washington Post on Martin Luther King Day, “Voter Suppression is a Threat to All.”

Fraud by individual voters in the modern United States is vanishingly rare, so the claim that new voter restrictions are necessary to combat such fraud does not hold water. Yet just because an idea is demonstrably false does not mean that it cannot powerfully shape public policy. New SSN briefs unravel what is really going on.

A review of thousands of prosecutors’ records and media reports shows that the average American is more likely to be hit by lightning than to commit individual fraud at the polls.

New voter restrictions are most likely in Republican-controlled states where growing groups of African American and Latino voters are turning out to vote in increasing numbers.

Who believes the myths about individual voter fraud? Belief in such fraud is widespread among people who hold negative attitudes towards African Americans or who worry that recent immigrants are taking away jobs from people already living in the United States.

New restrictions could reduce voter participation among low-income and poor Americans. That would, in turn, hurt chances for legislation to raise the minimum wage or take other steps to reduce economic inequalities.

STEPS BACKWARD IN THE STATES

States are where many of the battles over voting restrictions are unfolding – especially in the South, where race and partisan divides reinforce one another.

In North Carolina, newly ascendant Republican leadership passed some of the most stringent new voter restrictions in the nation. Undoing the damage could take years.

The attack on voting rights is revitalizing the religious left, reviving a movement that has repeatedly played a significant role in American politics.

In Georgia, a voter ID law has long been in place, but there is little evidence that it has ever stopped actual voter fraud – and the law may well have slowed the increasing tide of African American and Latino voting.

> When Florida Rolled Back Early Voting, Minorities were Especially Affected
Daniel A. Smith, University of Florida

New election rules passed in 2011 in Florida had dramatic impacts on participation in 2012, with the heaviest impacts on African American and Latino voters.

WHAT’S NEXT IN WASHINGTON? 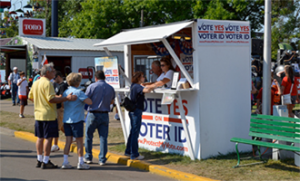 Recently, two hopeful signs emerged in Washington. Republican and Democratic members of Congress teamed up to unveil a new Voting Rights Amendments Act, meant to restore invalidated provisions of the original Voting Rights Act. Such legislation is essential, but the bill faces an uphill battle in Washington and, even if passed, is only a start toward much-needed broader reforms, as recently explained by University of Massachusetts Amherst scholar Jesse Rhodes and SSN Director of Civic Outreach Avi Green in Talking Points Memo. SSN researchers explain why more needs to be done to protect voting rights in this new century.

The Voting Rights Amendment Act could be greatly strengthened if its criteria for Department of Justice oversight of state election rules included not only a backward view of states where racial discrimination in voting has occurred, but also a projection of where such discrimination is likely to occur now or in the future, based on changing political forces and demographics.

> Restoring the Voting Rights Act Will Not Do Enough to Ensure Fair Elections
Amel Ahmed, University of Massachusetts Amherst

Even if threats to the actual act of voting are mitigated by a restored Voting Rights Act, other political arrangements like gerrymandering still sap the political power of ordinary citizens and must eventually be addressed to make every vote matter.

> Why 2014 Will be a Pivotal Year for Judicial Decisions about Voting Rights
Richard L. Hasen, University of California, Irvine

While Congress deliberates, key court challenges to Texas voter identification law and parts of North Carolina’s voting restrictions will show whether the federal courts will use intact sections of the 1965 Voting Rights Act to reverse recent state laws restricting voting.

When – and if – states turn to enacting reforms meant to increase participation and reduce problems at the polls, it will be important for reformers to bear in mind that not all purportedly pro-voting reforms are equal. Some mainly help privileged Americans who already vote in high numbers, while others can actually draw more low-income, minority, and youthful citizens to the polls. Even states with a good record in the past should take a new look at what works best.

The reforms that do the best job of increasing voter turnout and reducing economic disparities are those that make registering to vote as easy as possible. Allowing voters to register at the same time they vote on Election Day is what Rigby found to be most effective.

States with comprehensive, modernized voter registration systems that include Election Day registration do better than others in encouraging voter participation.

As Americans become increasingly comfortable with online routines, states can use online voter registration to make the process easier, more accurate, and much less costly to taxpayers. Citizens can check and update their status before Election Day, and community groups can use tablets and smartphones to help people register to vote with instant verification.

Reformers would do well to focus on reforms that address the jurisdictions where problems are most likely to occur – cities where large numbers of renters need to change their registration addresses frequently, new citizens and young voters are concentrated, and underfunded election authorities are most likely to fail to provide adequate voting facilities.

> Why America’s Election System is Failing – And How to Fix It
Heather Gerken, Yale Law School

With fifty different sets of state election laws and thousands of local jurisdictions, the United States would benefit from a new Democracy Index – a ranking of how well each state and locality runs its elections.

[…] Voting Rights: The Scholars Strategy Network presents an overview of research on steps forward and back since the Voting Rights Act of 1963. […]