How U.S. Higher Education Promotes Inequality—And What Can Be Done To Broaden Access and Graduation

A few decades ago, going to college seemed to be the surest route to the American dream, a path to greater opportunity for most young people. Yet today the U.S. system of higher education is evolving into a caste system with separate and unequal tiers. To be sure, more students from all backgrounds attend college and graduate with valuable degrees. But far too many from low-income and middle-class families depart early with no degrees and crippling levels of student debt. U.S. higher education as a whole is increasingly reinforcing rather than reducing class differences—and federal and state government policies need to change course.

In recent decades, the United States has gone from being the global leader in college graduation rates to 11th: other nations advanced while America stood still and reduced opportunities.

What Has Gone Wrong? 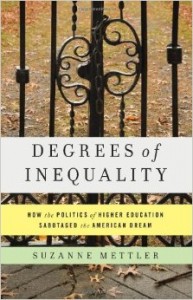 Blame for rising gaps in access and graduation is usually leveled at colleges and universities themselves, because tuition has increased much faster than inflation. That trend is undeniable, but lawmakers at state and national levels have failed to repair, maintain and update higher education policies so that they can, as originally intended, enlarge access and college completion for present and future generations. Reforms have been stymied by partisan polarization and the deference of elected officials to wealthy constituents and powerful interest groups.

Today’s higher education policymaking—and neglect of growing educational inequalities—marks an aberration from earlier eras. Since the nation’s beginnings, U.S. national and state-level policies have promoted the robust development of both public and nonprofit colleges and universities. In the mid-twentieth century, landmark federal policies expanded college access and graduation—above all, through the G.I. Bill of 1944, the Higher Education Act of 1965, and the creation of Pell Grants for low-income students starting in the 1970s. Federal spending on student aid has continued to grow, but longstanding and newer programs no longer enlarge opportunity.

If current trends continue, the United States will evolve into a country where the family into which a person is born rigidly determines college opportunity. To shift course, several changes should be made in the reauthorization of the federal Higher Education Act pending in Congress.

Suzanne Mettler is in the department of government at Cornell University. She is the author of Degrees of Inequality: How the Politics of Higher Education Sabotaged the American Dream.

How U.S. Higher Education Promotes Inequality—And What Can Be Done To Broaden Access and Graduation - Treat Them Better — January 13, 2015

[…] How U.S. Higher Education Promotes Inequality—And What Can Be Done To Broaden Access and Graduatio… […]