In the recent Fisher v University of Texas case, the U.S. Supreme Court voted to affirm the Fifth Circuit’s decision to allow University of Texas to consider race in admissions. This is good news, because numerous studies have documented the positive impact of racial diversity on college campuses. This robust body of research was cited in an amicus brief from more than 800 academic scholars explaining the benefits of campus diversity. The dangers of ending affirmative action are also evident in California, where enactment of an anti-affirmative action state referendum in 1996 led to a steep decline in the number of black and Latino college students.

The Supreme Court’s decision to allow continued efforts to racially diversify college admissions is good news. But the bad news is that the decision will continue to encourage selective colleges and universities to frame such efforts in unintentionally limiting ways. Although the benefits of a diverse learning environment are clear, affirmative action overall was originally intended to further multiple goals: to promote greater access for African Americans into elite, predominantly white colleges; to make up for the historical effects of racial segregation; and (on many campuses) to counter previous policies of outright racial exclusion. Today’s students, however, hear little about these broad goals. Instead, students hear from colleges that affirmative action will benefit them. Most students have internalized this message, which has troubling implications for how America’s college students think about race and meritocracy.

The Limits of Current Campus Justifications for Affirmative Action

Most students – especially white students – understand the role of race in society through one or both of two frames: color-blindness and diversity. A color-blindness frame suggests that race has little social meaning in the contemporary United States, and implies that any racial injustice lingering from the past will eventually dissipate, as overtly racist attitudes decline in the U.S. population. The second, diversity frame, suggests that race and other forms of difference shape cultural practices and understandings of the world in ways that help colleges promote learning for everyone. According to this argument, part of the college experience is learning about these differences, facilitated by college uses of affirmative action to promote diversity.

Clearly, these two arguments are somewhat mutually contradictory. Nevertheless, many students articulate both, invoking them in different situations. Many students, for instance, invoke the color-blindness frame to say they prefer exclusively merit-based, race-neutral admissions policies, yet also invoke the diversity frame to say they support affirmative action as a way to ensure a socially diverse learning environment. 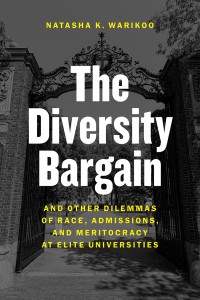 What both of these framings miss, however, is the pervasiveness of racial inequalities. U.S. education is rife with racial disparities, but most students cannot make sense of the historical roots of those disparities, given what they believe about the prevalence of supposedly race-neutral social policies in recent times. A minority of students do understand racial inequality as rooted in power differentials, often by participating in race-related institutions on campus such as Brown University’s Center for Students of Color (formerly the Third World Center). There students develop understandings of how power and race have shaped educational opportunities in the United States. However, very few white students participate in these campus settings – and most students of color are not involved, either. Because contrasting understandings of race and power are cultivated in different campus settings, the result can be a persistent divide, leaving many students unprepared to engage in meaningful dialogue about race in American society.

Explosive campus incidents that garner national media attention can make the lack of dialogue obvious and dangerous. Examples include the recent conflict at Yale University between students of color and a faculty member over guidelines for Halloween costumes, and controversies at the University of Missouri in which football players refused to play until the university president resigned after mishandling racial incidents on campus. In these and other instances, campus diversity brings little benefit when students are unable to engage each other in meaningful, thoughtful discussion about race. Without settings to promote robust but civil argument, discussion, and learning, students may gain little understanding of each other’s lived experiences. Despite their stated enthusiasm for campus diversity, most students, especially whites, could end up less likely to understand the lived experiences of their minority peers. College may reinforce their faith in color-blind frames as they move into the workforce and go on to make decisions in high-profile positions. For their part, students of color can end up feeling beleaguered as they try and fail to convince their peers that America’s past requires stronger current efforts to counter racial injustices.

How Institutions Can Take a Broad Approach

U.S. colleges and universities should continue to champion multiple efforts to explain and counter ongoing racial disparities in American society. All college students need to learn that the roots of racial disparities are myriad – including, to name a few, school systems whose racial segregation is increasing despite decades of attempts to integrate schools after the 1954 Brown v Board of Education decision; a criminal justice system in which sentencing laws disproportionately incarcerate African American men, leaving their children without a father close by or at all; and rampant unconscious biases, including among teachers, that affect individual decision-making and interactions among Americans of different races. Although current discussions on college campuses about identity and diversity are important, they need to be supplemented with attention to long-standing and persistent racial disparities in society.Without settings to promote robust but civil argument, discussion, and learning, students may gain little understanding of each other’s lived experiences.

Many of these realities can be conveyed in classrooms. A diversity requirement in contemporary U.S. college curricula is at least as important as the common rule that all students must take at least one class in the arts and humanities, social sciences, and natural sciences. To make classes about race effective, however, colleges would need skilled, trained, and open-minded faculty adept at managing challenging material and conversations. Faculty of color are often the ones best prepared and most inclined to take such assignments, but many white faculty members can and should meet this challenge as well – by examining their own practices and assumptions and sharpening their commitment to helping all students learn to fight racial injustice.

Natasha Warikoo is an associate professor of education in Harvard University’s Graduate School of Education. She is the author of The Diversity Bargain and Other Dilemmas of Race, Admissions, and Meritocracy at Elite Universities.